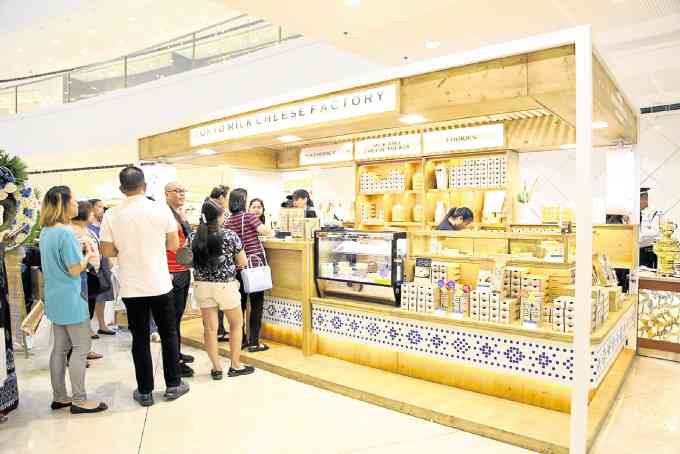 I first encountered Tokyo Milk Cheese Factory’s magic biscuits through a friend, who had hoarded several boxes from Japan. The biscuits come in individually wrapped foil packs and are actually more like square sandwich cookies.

The crisp, golden biscuits are browned along the edges, with a light, melt-in-your-mouth, buttery consistency. In between the biscuit squares is a creamy cheese and milk filling.

These biscuits were so indescribably delicious that when my friend sent me home with a box, I rationed them off and ate just one a week—until I learned that Konbini in Greenhills sold them.

I also learned that other entrepreneurs in the Philippines have long been wooing the Japanese company to come here, but to no avail. In the end, it was the original unofficial crack cookie dealer, Bryan Tiu of Ifoods Group, who also operates Konbini, who won the rights to bring Tokyo Milk Cheese Factory, officially at last. Outside of Japan, Manila is the second location to host the brand aside from Hong Kong.

“I had to come clean first and tell them I’ve been selling their products at Konbini,” says Tiu with a grin.

According to Tiu, with the opening of Tokyo Milk Cheese Factory, they hope to create a food gifting segment in the market, an industry that is very mature in Japan, but nascent here in the Philippines. “The Philippines is more than ready for it,” adds Tiu. Their boutiques are open just in time for the Christmas rush.

While we have many options for pastries and sweets, both homegrown and imported, there are only a handful with the “giftability” factor. In Japan, food gifts are given just as much importance as a silk scarf or jewelry, with packaging and presentation elegantly and artfully done.

Tokyo Milk Cheese Factory’s biscuits come in a minimalist cardboard box with a pullout drawer. The only adornment on the box is the brand’s emblem.

In true Japanese fashion, the product lineup is sparse but expertly crafted. There are three flavors of biscuits available here: the universal favorite, Salt and Camembert (P580/set of 10); Honey and Gorgonzola (P620/set of 10, Spanish rosemary honey mixed with gorgonzola and white chocolate cream filling); and Porcini and Gouda (P620/set of 10, Italian porcini mushroom and Gouda cheese).

Also available is the Milk Cheese Cake (P950 for a whole cake), a fluffy and rich cheesecake made with fresh Hokkaido cream and blended with French milk and cream cheese, with a crepe exterior.

Tiu, meanwhile, hopes to add products in the summer, like Hokkaido soft-serve ice cream, a not-too-sweet ice cream with a rich creamy milk flavor you can’t get enough of. —CONTRIBUTED