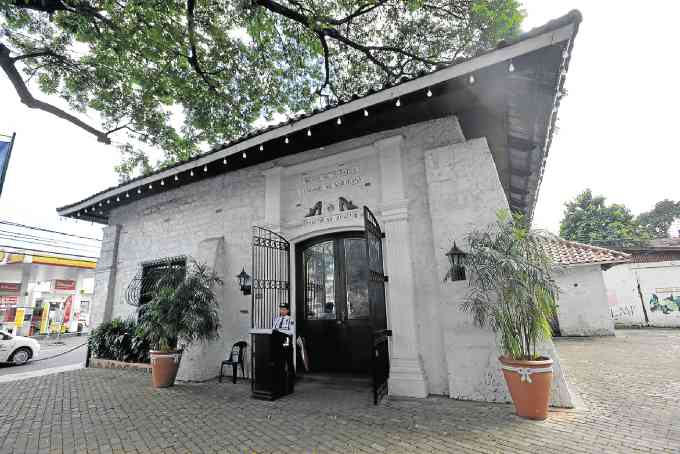 This historic structure has been declared a national shrine —ROMYHOMILLADA

Of many Marikina landmarks, probably none more fully represents the place and its people than the Shoe Museum.

Built in the 1860s, the structure was used as an arsenal by the Spaniards; a detention cell during the Filipino-American War; a motor pool during the American occupation. It was converted by the Tuason family into a rice mill after World War II, renovated in the late 1990s, and opened as a museum in 2001 in homage to the city’s shoe industry.

This is the prime product that has put Marikina on the international map. Displayed in one of its malls is the biggest pair of shoes in the world—5.29 meters long, 2.37 meters wide, 1.83 meters high, with 16-inch heels, and made of genuine leather—which took 77 days to finish. Renowned as the Shoe Capital of the Philippines, the city holds a Sapatos Festival from mid-September until year’s end.

An ilustrado (father from Quiapo, mother from Pasig), Guevarra took apart his worn-out English shoe, studied its construction and components, and learned how to work on leather from two Chinese cobblers in Escolta. In 1887, the first pair of shoes in Marikina was designed and made in what is now known as the Kapitan Moy Building.

It was once visited by Andres Bonifacio. The place, established in 1780, was declared a national shrine in 1968 and turned into Sentrong Pangkultura ng Marikina in 1993.

Some 50 meters away from it, just across the Church of Our Lady of the Abandoned, is the Shoe Museum. This is one of the more popular tourist destinations in the city, averaging 50 visitors on weekdays, 60-70 on weekends including foreigners. From a recent tour group, it received 193 visitors.

By the entrance is a life-size diorama depicting the traditional way of making shoes, with notes tracing the history of the shoe industry.

At the center of the hall is a column of old wooden shoe lasts. At the foot of the stairwell to the mezzanine is a pair of 3-feet-tall soft-leather boots.

The museum showcases the footwear worn by prominent personalities and figures in Philippine history, from actors and senators to Presidents and their First Ladies. Of the presidential shoes displayed, the biggest is that of Joseph Estrada’s size 10.

Also displayed are traditional footwear from other countries, such as Indian moccasins, Viking boots, Roman sandals. On one corner are the award-winning shoes in the city’s annual design competition, most of them fantasy footwear.

They occupy one long wall of cabinets and reach up to the mezzanine. She actively promoted Marikina’s shoe industry and was reportedly gifted with an average 10 pairs a week by local shoemakers, thus her vast collection. Said to be her favorite is the Italian-made luxury pair by Beltrami.

As the guest of honor at the museum’s opening, she was quoted as saying: “This museum is making a subject of notoriety into an object of beauty. More than anything, this museum will symbolize the spirit and culture of the Filipino people.”

When Typhoon “Ondoy” struck in 2009, Marikina was one of the most deluged areas in the country with floodwaters reaching 4 ft deep inside the museum. Many shoes were damaged, but the most significant had been hauled up to the mezzanine in time, including, of course, Imelda’s.

A typical Marikina shoemaker is Rolando “Oly” Santos, 68, who has been making shoes for 54 years.

Santos apprenticed when he was only 10 and made his first pair at 14. He says he can finish a pair in a day and a maximum of 18 in a week, helped by wife Perla.

He makes only handcrafted men’s shoes of cowhide, though he has done alligator skin—and only custom-built shoes, upon order, or what’s now fancifully called bespoke.

Made-to-order items are more expensive, but how many orders can one get in a month? Santos says he can afford to make only customized shoes for now, “’di pa kaya ang bulk; maghahanap na ng five-six niyan.”

He tries to make both ends meet with his trade, to put his children through college and maintain a P4,000 rent for a cramped dwelling-cum-workshop.

He has tried to teach his craft to his two sons but neither knows how to make shoes. One son finished marketing, so he hopes this one could help him in his trade.

Fortune looked kindly on him in June.

A few days before the inauguration of President Rodrigo Duterte, Santos sent him a pair of size-9 boots in tan brown, of calfskin and pigskin with decorative perforations. He calculated the fit and style just by watching the incoming president on television.

President Duterte was gifted with over 100 pairs of shoes for the inaugural, “pinaka-walang class ang box ng sa akin,” but his was chosen anyway, Santos enthuses.

He was told the shoes were not used at the inaugural as there were no pants to match them with, but, he points out, the President wore them during his meeting with US Secretary of State John Kerry and at the 115th anniversary of police service in Camp Crame.

Now the cost of his shoes “halos nag-doble,” he says, not because the instant popularity has made him hike his price but the customers themselves would offer to add to his pricing. He reveals the President has ordered a few more pairs, of the same style though in various color tones, but instead of the standard P4,000, the President has offered: Why not make it P6,000?

Santos says he wouldn’t have asked to be paid as he has a lot to thank the President for. The instant celebrityhood has given him a slot to showcase his creations at the ongoing Shoe Festival.

And on the façade of the dilapidated workshop of this mamang sapatero, one establishment has put up a tarpaulin that reads: “Pride of Marikina.”