Into the wilds of Montalban | Inquirer Lifestyle ❮ ❯ 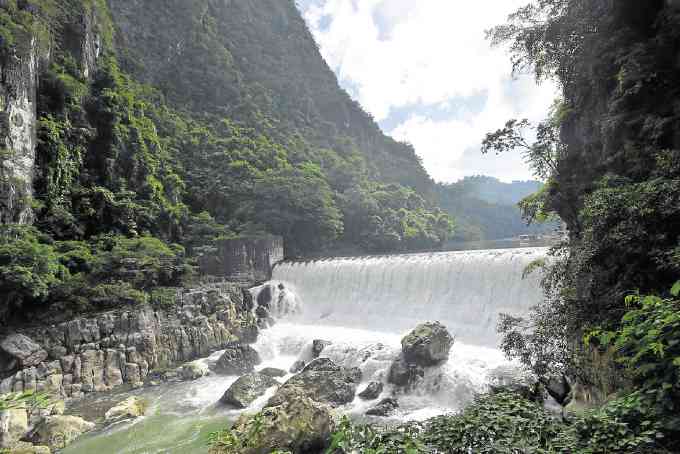 Into the wilds of Montalban

At the foothills of the Sierra Madre in Rizal province, before it wends its way through Bulacan and Quezon province farther north to Cagayan Valley, is a spectacular gorge that birthed one of the country’s most beloved legends.

This is Wawa Gorge, cleaved between Mounts Pamitinan and Binicayan in the town of Montalban (now Rodriguez). The 1,180-feet-high water gap is surrounded by white rock walls (80-160 feet high), limestone crags, marble boulders. The two mountains form a scenic view that appears like a portal to the sky, hence, wawa, Dumagat term for “entrance.”

Sitio Wawa in Barangay San Rafael is a habitat of the Remontado Dumagat, mixed-blood offspring of lowlanders who fled the Spanish colonizers and of Negritos, the original setters in the area.

Here dwells Bernardo Carpio, said to be either a man of extraordinary strength or a titan, our version of Hercules or Atlas. In olden times, he was trapped by an encanto (enchanted creature) between the two boulder mountains. Every time he struggles to free himself or keep the boulders from crushing him, or from colliding and thus causing landslides and flooding in nearby villages, an earthquake occurs.

One may dismiss this as how the ancients explained natural phenomena through myths, but Bernardo Carpio is also a versatile symbol of freedom.

Filipinos have used him as a metaphor for a liberator of a people in bondage, from the Spanish colonization through the American to the Japanese occupation. When the last link of his chain is broken, the country will finally be free.

José Rizal is said to have made a pilgrimage to Montalban to pay homage to him. Andres Bonifacio made one of Pamitinan’s caves the Katipunan’s secret headquarters, where they declared independence from Spain on April 12, 1895, over a year before the Revolution started.

In recent times, Lav Diaz has used the legend as organic symbol in his film “Hele sa Hiwagang Hapis.”

A boulder on the riverbed has hollows that form what look like a gigantic footprint, which locals attribute to Bernardo Carpio.

The area was declared a Protected Landscape in 1996. It is managed by the Department of Environment and Natural Resources (DENR) and the Department of Tourism, with Rodolfo Roncesvalles acting as DENR custodian of the caves and Eduardo Dapitan as tourism OIC.

Here is the Upper Marikina River basin, its headwater said to be in Quezon province. From here the river runs through the gorge and descends to the lowlands of the neighboring town of San Mateo and Marikina Valley.

From the entrance is over 500-meter trek on a ridge to Wawa Dam. Along the trail are stores selling snacks and beverages to tourists.

The 40-feet-high gravity dam was constructed by the Americans in 1904. It started operating in 1909 to supply water to Manila, until it was closed in 1962 and replaced by the La Mesa-Ipo-Angat watershed system to provide the needs of the greater Manila area.

The dam now looks like a small waterfall, the sparsity of its water likely due to the logging and quarrying in the mountains. On its reservoir, people swim and ride boats. Bamboo rafts and cottages are rented out to picnickers.

These rafts are also used to transport from the mountains the locals’ produce to be bartered or sold to lowlanders, particularly on Tuesday and Friday, when foot traffic is heavy on the trail. Young men carry sacks of charcoal, fruits and vegetables, bananas, papaya, river shrimps, crabs, eels, carp, eggplants, squash, gabi, takway, puso ng saging, pandan leaves.

You can be sure these are organic, assures Roncesvalles, as they’re grown in the mountain where people don’t use commercial fertilizer and pesticide.

A hanging bridge spans the gorge leading to Pamitinan Cave. Some 500 meters of narrow passage away from its mouth is what locals refer to as “bulwagan” (hall), a cavern over 50 feet high and about 50 feet in radius.

Bonifacio and eight of his men entered the cave on Palm Sunday and came out on Good Friday. (The Pamitinan pilgrimage is held in April.)

Inscribed on the cavern wall is Viva la Independencia—in what looks like charcoal, “may kasama pang langis,” Roncesvalles says, and speculates it could be soot from a torch. It is said to have been written by Aurelio Tolentino.

The cave was turned into a Japanese armory in 1943. Men of Generals Hideki Tojo and Tomoyuki Yamashita died here from American fire.

A 1977 concrete marker commemorating them has been fixed on the cliff wall over the cave’s mouth, above which is a metal plate inscribed with Japanese characters with English translation that reads: “Give them eternal rest, O Lord, and let them share Your glory.”

The cave was declared a National Geological Monument in 1985. It is closed for rehabilitation until further notice.

Wawa is the birthplace of Montalban’s first mayor and Senate president Eulogio “Amang” Rodriguez Sr., after whom the town was renamed in 1982. It is a hot spot of history, mythology, ecology and tourism—so small and remote a place yet of vast significance to our national culture.

Roncesvalles’ problem is people hunting for the fabled Yamashita treasures in its caves. He says he had been threatened once by these shadowy characters.

Also, he worries the quarrying in the area not only despoils the protected landscape but the blasting could threaten the foundation that not even Bernardo Carpio can move.