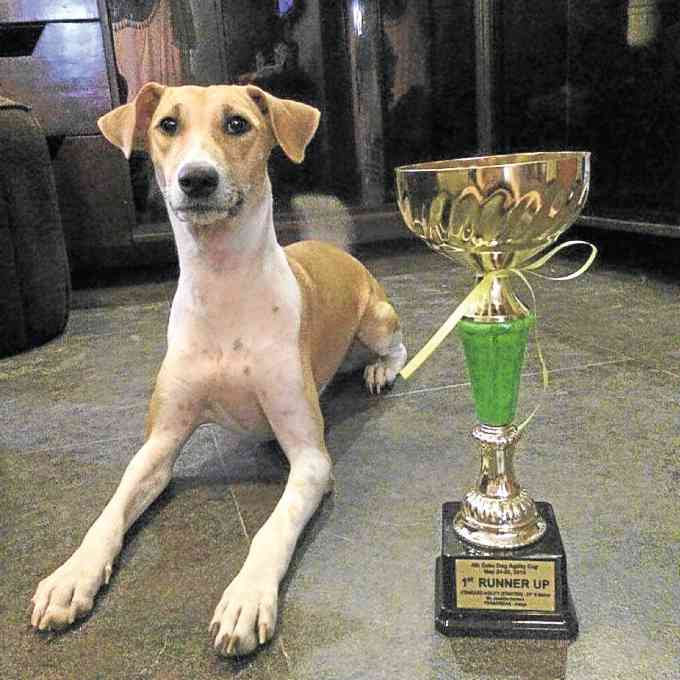 Asong Pinoy (Aspin), a mixed breed mongrel, is often dismissed as a stray dog or, at best, a common guard dog in Filipino households.

Kimchi is easily the exception.  The 3-year-old Aspin is quickly being known as “Champion Dog” and has been awarded for her extraordinary Frisbee and agility skills by the Philippine Dog Agility Association in Pampanga in March 2015.  The brown Aspin placed second to a pedigreed dog and topped eight other contenders.   She can also do a foot stall and several other freestyle tricks, thanks to her trainer Chinese-Filipino Chardy Ang.

“Kimchi surpassed my expectations. Super,” said Ang. “An Aspin is an Aspin. They’re not like dogs with breed that are born to hunt or are naturally aggressive. Aspins are supposed to guard homes and usually shy away from people. I can expect Kimchi to have agility, but I did not expect her to do great in Frisbee as well,” he added.

The Philippine Animal Welfare Society (PAWS) lauded Kimchi in its Facebook page for “showing that (Aspins) are also trainable and as good as purebred dogs (that) are usually the majority in these dog competitions.”

Despite her many awards, Kimchi’s greatest conquest may be overcoming the abuses she suffered from her previous owner.  When she was adopted in October 2013, she was shy and wary.  The then 6-month-old dog stood still in her temporary shelter, lonely and unresponsive, said Anna Cabrera, executive director of the PAWS Rehabilitation Center.

Several months back, the dog was rescued from Kang Din Pill, a Korean who allegedly mauled to death Kimchi’s two other siblings using a piece of wood. Formerly known as Yuna, Kimchi, and her brother Leon would have been killed next, had neighbors not intervened and reported the incident to PAWS.

Two of the puppies lay dead and bloodied when discovered by residents of Brgy. Pagasa, Quezon City, while Kimchi and Leon were found terrified and hiding under a car.

Despite seeing fear in Kimchi’s eyes, Ang also saw curiosity and a spark of intelligence.  He knew it was the dog he was looking for.

Kimchi soon became the latest member of the Ang family.  Along with his wife, a son and a 2-month-old baby, Ang’s family is composed of a 7-year-old Jack Russell named Skye, and two Border collies named Andi and Chesca.

The last two have appeared in TV commercials, while Skye, Andi and Chesca have won several times in the Talentadong Pinoy competition.  Kimchi recently appeared in a TV show with TV-movie star Kathryn Bernardo.

Ang said the goal was to convince and prove that Aspins can be trained, and that they can shine in dog competitions alongside pedigreed canines.  Ang even enrolled at Betterdog training school  to know more about the dynamics of dog training.  It was during the training that he dealt with Kimchi’s personality and genetics, describing the process as sort of like  “manipulating the (dog’s) traits.”  But you never force

a dog, Ang said, adding that extraordinary patience and a lot of time  invested in training work better.

“You cannot force them to do something. You should know how to positively reinforce your pets’ (traits) by giving them rewards and by emulation…no violence,” he added.

Ang has converted their rooftop into a training ground for his dogs, with obstacle courses and other tools.  Every morning from 6 a.m., he sets aside 45 minutes to train each dog to catch a Frisbee and other tricks. Playtime follows.

While Aspins are trainable, they also get distracted easily and are naturally fearful, Ang said. Before competitions, he would prepare Kimchi and the other dogs by exposing them to possible scenarios and distraction.

The greatest reward a trainer gets from a dog is trust, Ang said. “Most of the time, people automatically trust the dogs. But dogs don’t automatically and easily trust humans,” he added.

Although there have been several offers for him to train other dogs, Ang has refused them.  “That means investing emotionally in other dogs. And I don’t want that. I might fail to return them to their owners,” he said. “My goal is not to earn from training dogs, but to see them happy and satisfied.

As for Kimchi’s abusive first owner, the Korean is currently out on bail and is facing charges for violations of Section 6 of Republic Act No.  8485 or the Animal Welfare Act. The next case hearing is set on Nov. 23.