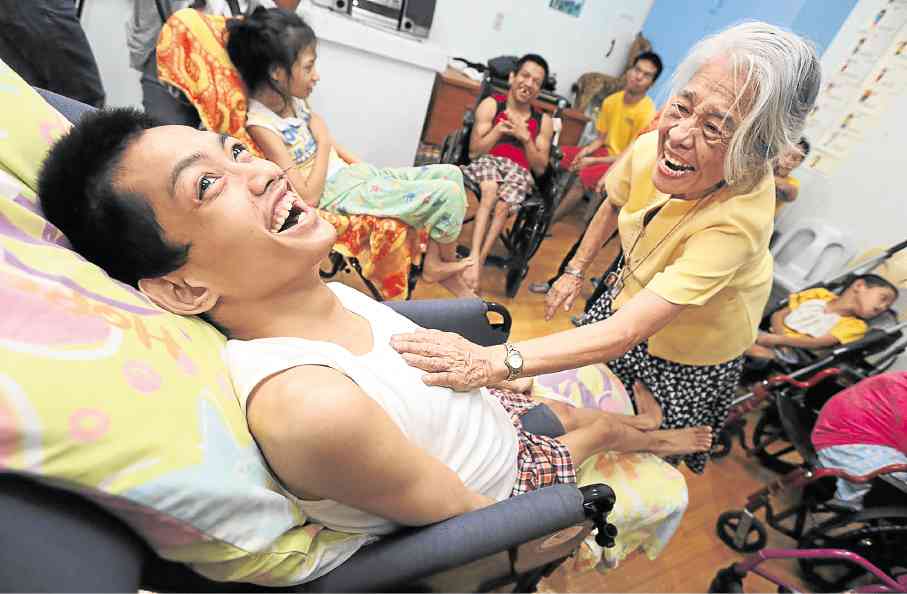 FUN TIME AtHandicap Center Lourdes inside Caritas Pandacan, Celeste Sanchez uses music to interactwith PWDs, teaching them to breathe properly through the diaphragm (above), or forming an impromptu orchestra using small instruments that she herself brings (below).

Whistling in the dark, hitting the right notes

Who doesn’t like music? “I’ve never encountered anyone who didn’t like music,” said Celeste Sanchez, 82, a pioneer of music therapy in the Philippines and founder of the Divine Mercy Mobile Center of Music and Arts Therapy for Special Children and Adults. Even in the womb, Sanchez said, the fetus already hears music—the rhythm and beat of the mother’s heart. “I found that music is therapeutic. In music, there’s no need to talk. The heart dictates [the words].”

And follow her heart, Sanchez did, finding her calling in providing music therapy for the differently abled:  People with autism and cerebral palsy, the blind, stroke survivors, cancer patients and the elderly.

It’s a calling that must have been stoked by life experiences starting when she was 4.  Sanchez recalled trying to befriend a hairy child who slunk away, and being puzzled at how indifferent people were to the little girl. Another time, when she was teaching piano to three siblings, she saw a little boy peering from the shadows. She asked if he wants to learn to play the piano too, but the boy was shooed away and dismissed as feeble-minded.

She vowed from then on that she would not discriminate against anyone who wants to learn music, be they handicapped or even too poor to pay for the lessons.

Sanchez, who took up Piano and Voice and has a Music degree from St. Scholastica’s College, was teaching at Esteban Abada High School when her class entered a choir competition. With no experience handling a choir or conducting one, she was surprised when the group won first place at the competition held at Rizal Park.

When she was asked to make a choir out of 40 blind beggars off the streets, music teacher Celeste Sanchez, 82, was petrified. But when their concert proved successful, she knew she had found her life mission: to share music with the differently abled.

When Sanchez became president of the archdiocesan choir, training parish choirs became routine for her. She recalled how Cardinal Sin once requested the choir to sing The Seven Last Words at the canonization of Blessed Lorenzo Ruiz.

Despite a full plate teaching piano and voice as well as handling choirs in churches, offices and schools, Sanchez felt something was lacking.  “I was a happy mother of eight children, with a loving and hardworking husband and an on-and-off job as a part-time piano, voice teacher and choir director,” she said, but despite all these, “kulang pa (life felt inadequate).”

Sanchez’s life work began when she was invited to teach choir music to 40 blind men in 1977. The group of beggars was rounded up by social workers on Manila’s streets and placed in a special home. “I wanted to back out,” she recalled. “How can I teach them mouth formation or ask them to follow my hand movement when they can’t see me? I prayed and was enlightened.  Praying led me to my own basic teaching philosophy—teach people who like to learn music without discriminating against anyone,” she added.  The philosophy animates her book, “What Music Therapy did to George: Experiences of a Music Therapist with Special People,” where she documented cases she had handled. The book was published in 2004.

It took months of individual coaching, but music came easy for these blind men who were soon ready for a major concert. The concert was a huge success, though not without some moments of frustration and fear. There was in-fighting, with the blind men using their canes as weapons. Eventually cooler heads prevailed and each one apologized for his terrible behavior.

A greater challenge was when Sanchez was asked to organize for a choir competition 12 blind people from Ephpheta Foundation, a charity organization that provides training, livelihood opportunities, moral and finanical support for the blind and their families.  The competition also had as contenders people who were not visually impaired, so Sanchez confessed to being anxious. “Nobody taught me how to teach the blind. I had to hold their arms one by one for the right gesture while singing.” 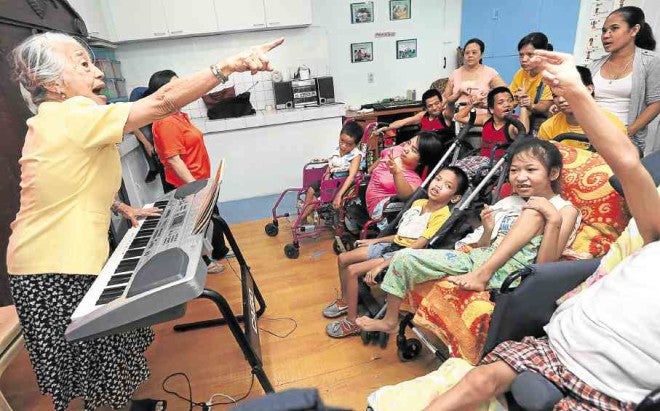 Since then, Sanchez found herself gravitating toward persons with disabilities (PWDs).  In 1977, she founded The Divine Mercy Mobile Center of Music and Arts Therapy for Special Children and Adults, so named after her intercession for Divine Mercy for the success of her husband’s brain tumor surgery was answered.  It was a mobile center because Sanchez would go to various institutions, among them the Golden Acres Home for the Aged, with an assortment of small musical instruments, such as tambourines, bells and a portable keyboard.

Without consciously pursuing it, Sanchez became a pioneer in music therapy which she simply called “sharing [her] music.”  She’d rather focus on her method: “I used different approaches in music per disability. For those with speech defects, I would teach vocalization; if [they’re] hyper[active], I would play calming music on the piano.”

Sanchez calls her recitals by the differently abled, “A Recital by the Enabled,” a fitting title for PWDs who have found enough confidence to perform publicly onstage.  Thanks to word of mouth, the recitals soon attracted music professionals and even medical experts, and soon this music advocate was talking about her work in international conferences on music therapy, and on wholistic and alternative medicine.

In a recent music therapy workshop sponsored by Unilab for Agewell members 50 years and above, Sanchez told the elderly, “I am proud of my age. We should be leaders because we are the wisest people due to our experience even if [we’re] not schooled.”   She then encouraged the participants to walk straight for balance and coordination before asking them to march vigorously for exercise to the tune and pace of her music. Then she asked couples to dance, with one singing to the other “with feeling.”  One husband gushed, “I have been married for 37 years. It’s only now that I realize how much I love my wife.”

To end the session, Sanchez brought out her tambourines, the bells and other small instruments and formed an impromptu orchestra—to the delight of the volunteers and the audience. 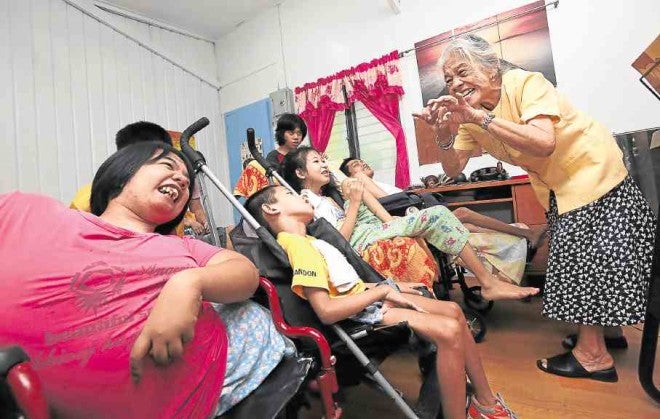