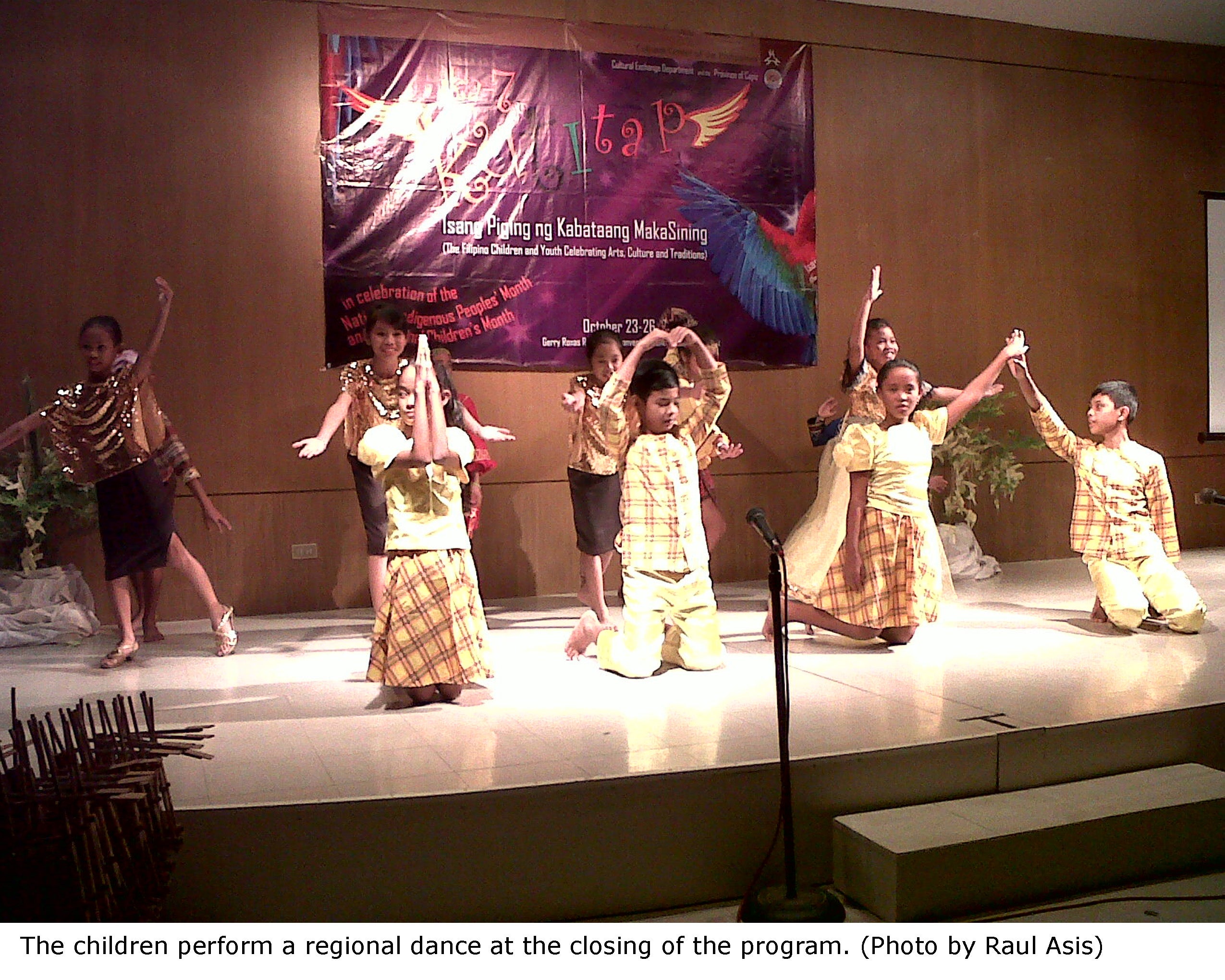 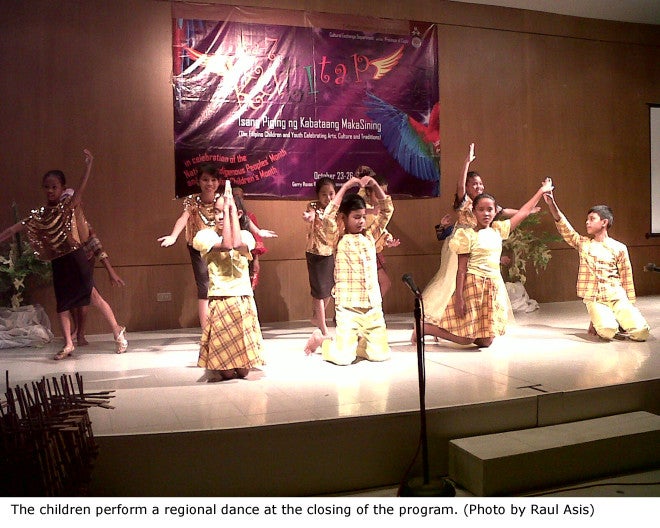 To gather a bunch of sixty plus children aged 7-13 years who not only speak different dialects but also come from far-flung regions with diverse cultures, teach them to perform a song and dance number, participate in storytelling and craftsmaking activities, and encourage them to get along with each other in just three days is a herculean task indeed.

While taking care of all the artistic and logistic needs of the children, including their adult guides, accommodating them in one locality may already be a challenge, but moving the venue to another place outside of Manila is another obstacle.

Despite all the hardships, however, the smile on each kid’s face and the countless gratitude spoken by every boy or girl for the love and care they receive is both heartwarming and priceless. These are some of many scenes that had made the “Kutitap” event different from among other child-oriented projects.

Now on its 7th year, “Kutitap” is a project of the Cultural Center of the Philippines’ Cultural Exchange Department under the leadership of Carmencita “Chinggay” Bernardo. It is aimed at instilling among the Filipino children and youth a deep sense of understanding, appreciation and pride for Philippine arts, indigenous culture, as well as to promote creativity and positive social values. Since the first gathering in 2009, “Kutitap” has already reached more than 2,611 children from 85 local communities nationwide.  In 2011, the project was redesigned for the benefit of the children in Northern Luzon (Hagonoy, Calumpit, Macabebe-Pampanga, & Jaen-Nueva Ecija) which was badly affected by typhoons Pedring and Quiel.

For the first time in 2015, Kutitap was brought out of the CCP and was hosted by the City of Batangas.  It was also the first time that the program was filmed and presented as part of the Children of Asia research project under the Asian Culture Institute (ACI) in Gwangju, South Korea.  The film made by Kevin K. Park was shown during the opening of the Asia Culture Center (ACC) in Korea.

“The CCP thru its outreach programs has long been initiating programs to open the minds of the Filipino children to be happy, creative, intelligent, and show love for our country, culture, tradition and not be ashamed of our race,” Chinggay says of the project. From Luzon, Kutitap expanded its reach to the Visayas particularly in Capiz, a first class province in the Western Visayas region whose capital is Roxas City and located at the northeastern portion of Panay island, bordering Aklan and Antique to the west, and Iloilo to the south.

Capiz faces the Sibuyan Sea to the north, andis known for the Placuna placenta oyster shell that has the same name locally which is used for decoration and making lampshades, trays, and window doors. Likewise, the province is known as the country’s Seafood Capital. 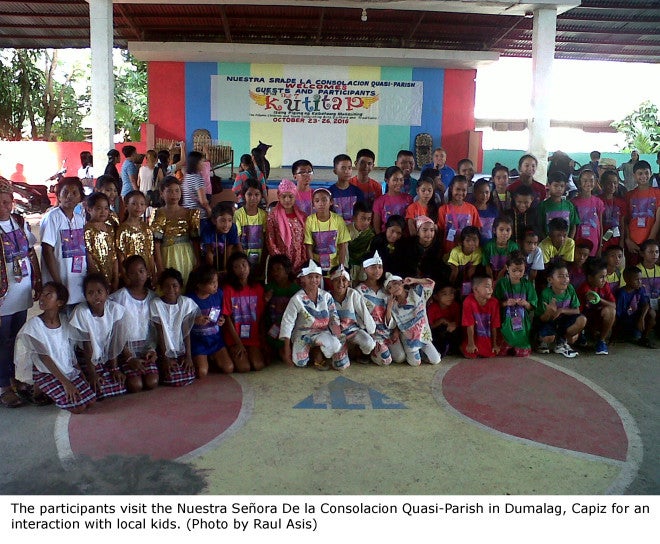 In partnership with the Province of Capiz, CCP’s latest undertaking entitled “7th Kutitap: Isang Piging ng Kabataang Makasining” took place on October 23-26, 2016 at the Gerry Roxas Foundation Resource Center in Roxas City. The event was presented in celebration of the National Indigenous Peoples’ Month and the National Children’s Month.

The sixty participating children, together with their adult guides representing various cultural communities all over the country were chosen for the three-day celebration of arts, culture and traditions.

The experience of being in company with such a diverse and awe-inspiring composition of young artistic minds for a brief period of time did not pass without any tinge of drama though. Ara, a young dusky girl from the Ati group in Malay-Aklan, got the biggest surprise of her life one morning when she was gifted with a dainty and colorful birthday cake while being greeted by young and adult friends.

Having just turned thirteen, she cried unabashedly and said “Maraming salamat!” (Thank you!) for the gesture. Her group leader explained later while comforting the child that the incident was actually a fulfillment of two of Ara’s fondest wishes since she never had a birthday cake to celebrate the occasion in her entire life. Another wish she had was to step inside a shopping mall.

Kenchi Sean dela Concepcion, the youngest boy from the Kapampangan (Angeles, Pampanga) group known for performing with unique instruments made of bamboo, was a quiet type most of the time but loved to sing. His group leader said that although the kid has dyslexia (a learning disorder characterized by difficulty in reading or interpreting words, letters, and other symbols, but that do not affect general intelligence), Kenchi managed to memorize and even lead in singing the Tagalog songs they were practicing for the closing program, thanks to the encouragement of a female adult guide. 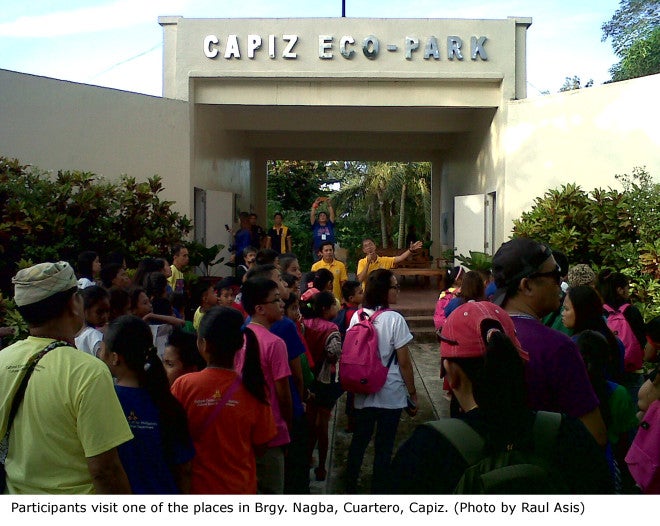 They were surprised by the turnout since they had difficulty getting the child to sing in “Bale-Balayan” (museum /art art center in Angeles City. Another poignant story from the same group was about their tardiness in arriving for their departure to Capiz. Their reason behind the late arrival, which was understandable, pointed to the responsibility shouldered by two of its young members – Arvin Lenon had to finish selling his basket of balut (fertilized duck egg) for the day, and Reynold Pagador had to carry out scavenging.

As the young participants share their thoughts and talent through art in Kutitap, one cannot help but realize the importance of child rearing and parenting. And in the society they live in today, the children have actually very simple wishes.   To quote some of the lines from an inspirational song entitled SANA by Ana Nobleza which the kids sang and performed for its closing program: 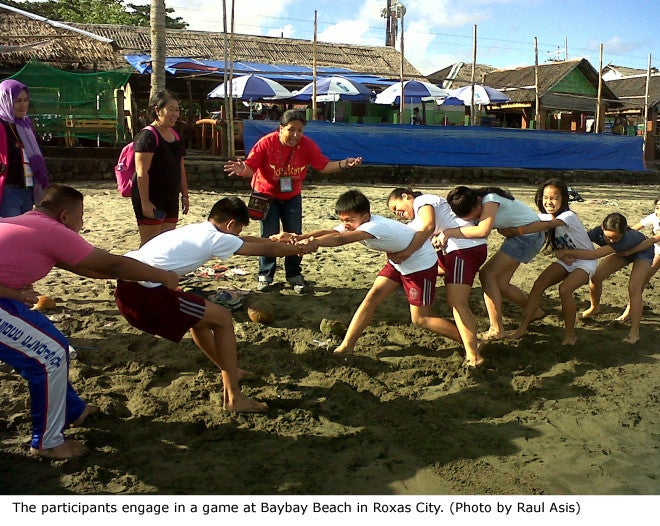