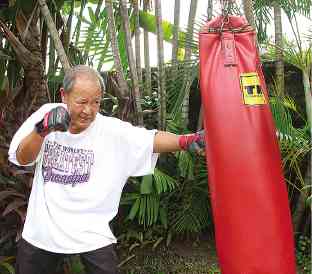 At a recent checkup, the doctor told the septuagenarian that he had the fitness level of a man in his late 20s.

De Ocampo doesn’t have the usual concerns of people of a certain age—no high blood pressure or triglycerides to create heart problems, no uric acid that leads to gout.  Eschewing bad carbohydrates, he substitutes quinoa for bread and pasta and honey and stevia for sugar.

“The only thing is that my joints ache a little more than they used to,” he says. “But it’s nothing I cannot tolerate. I continue to be active.”

As a Cabinet official from 1992 to 1998, De Ocampo was frequently featured for his classical guitar music and taekwondo skills, on top of his economic achievements.

The Department of Finance introduced landmark legislation. The comprehensive tax reform bill lowered corporate taxes and simplified the filing and tax recording system. It introduced the value-added-tax to improve revenue. He also paved the way to improve the recording system in Customs to facilitate the quick release of goods more efficiently.

As finance secretary and chairperson of privatization, he drafted the infrastructure plan which led to major developments, such as the transformation of Fort Bonifacio into a satellite city.

“There was a lot of impetus for investor attraction. We were on the rise until the Asian Crisis in 1997. Still, we were least affected,” says De Ocampo.

He is the first Asian to be on the board of the Global Reporting Initiative in the Netherlands, an organization which looks at all aspects of a business, and the  only Filipino who sits on the board of a top-level think tank, the Trilateral Commission, with headquarters in Washington.

When Queen Elizabeth II marked her Diamond Jubilee in 2012, De Ocampo was bestowed the Order of the British Empire (OBE) for strengthening ties with Britain, establishing cultural foundations that involve the youth of both countries, and bringing in the British all-boy singing choir Libera. He was also given the National Legion of Honor, the highest order given by the French government.

Asked if he should be addressed as “Sir Roberto de Ocampo, OBE,” he replies, “I joke people about it. I’m too humble for that. ‘Your Highness’ will be fine.”

His energy is attributed to his active lifestyle and diet.  A taekwondo blackbelter, De Ocampo uses the warm-up exercises to stay in shape. For cardio fitness, he runs half a mile around the park,  hits the punching bag, plays speedball, skips rope and pumps iron in his bahay-na-bato-inspired home.

“I’m not trying to be Arnold Schwarzenneger. You need a good degree of muscle cardio fitness, muscle tone and flexibility,” he says.

In his 20s, De Ocampo was a golfer with a single-digit handicap.  The sport came in handy when he was finance minister, because Ramos liked to mix work and play in the golf course. Ramos would jog, hit the ball and go off to the next shot.

“Not everybody was fit in the Cabinet. I was fit. He liked to utilize golf as a means to informally discuss issues. He would call the Cabinet to play with him and show them newspaper clippings,” recalls De Ocampo.

De Ocampo joined Ramos in his golf with such VIPs as Hasannal Bolkiah, the Sultan of Brunei, and US Vice President Dan Quayle.

He favors Japanese clubs made by Honma, Yamaha and Beres. “They are better constructed. Their grip is more attuned to the size of Asian hands,” he says.

Although he had a lower handicap in his 20s , he received more golf trophies in midlife.

“I began to play smarter. When you’re young, you want to hit the ball till kingdom come, regardless of where it goes. I wasn’t attuned to course management. After 40, you mature. You may not be hitting as far, so you become more consistent.”

Golf was also how he met  his future son-in-law Marc Casperino, a professional tennis coach. Before Casperino could date his daughter, Monica, De Ocampo challenged him to a round of golf.   Fortunately, Casperino had a low handicap.

Monica has passed on her family’s passion for sports to her children Rocco, 10; Rocky, 7; and Giada, 2.  The boys are waiting for the children’s size golf clubs before they hit greens. Meanwhile, Rocco plays basketball with De Ocampo.