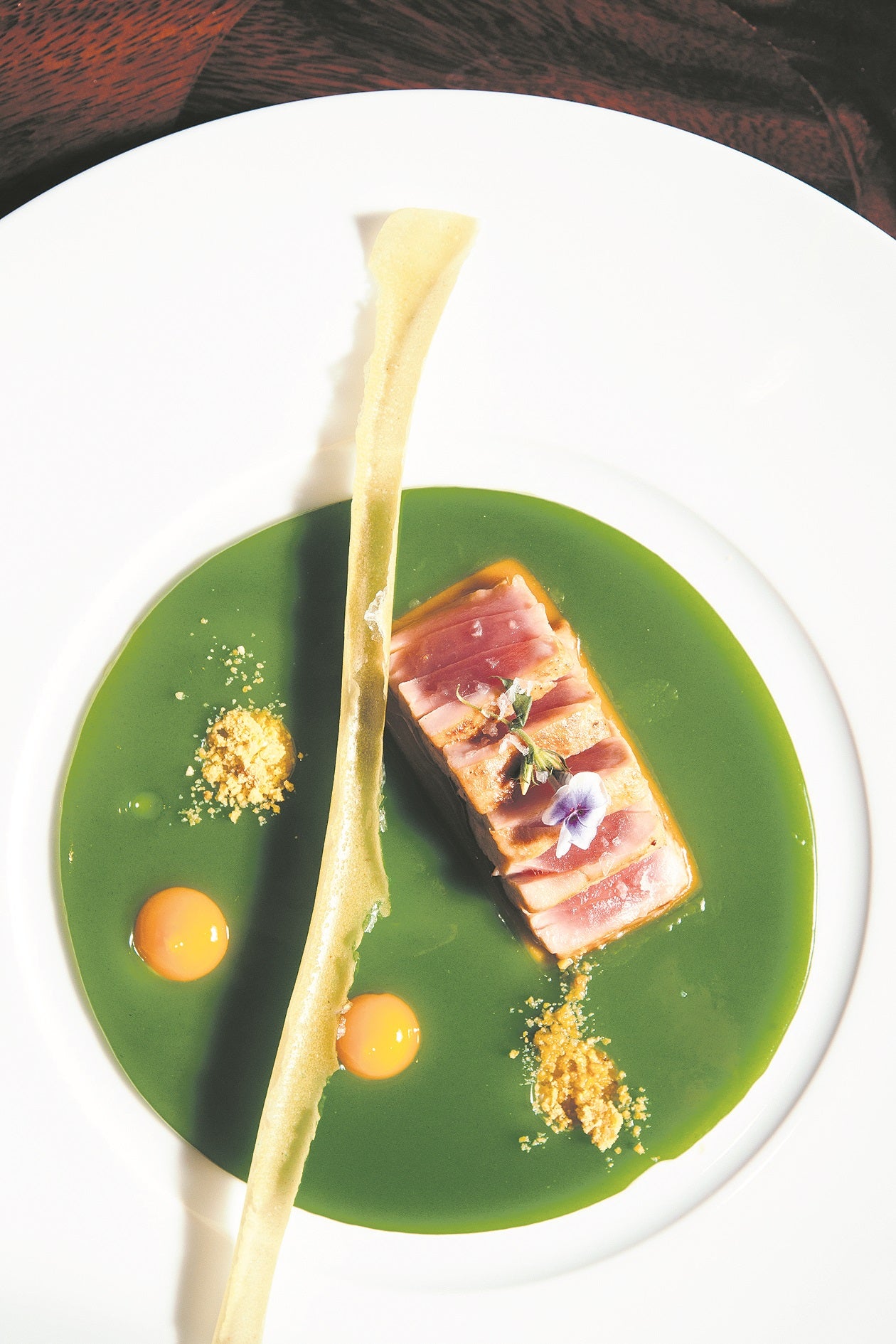 Beduya, a demi-chef at Brasserie on 3, Conrad Manila’s all-day dining restaurant, will represent the hotel in the regional culinary tilt in Indonesia. If he wins, he then goes to Sri Lanka to battle it out for the 2016-2017 Hilton India-Southeast Asia (ISEA) F&B Masters.

Conrad Manila, owned by SM Hotels and Conventions Corporation, is being managed by Hilton Worldwide.

Skilled staff members from Hilton Worldwide hotels throughout Southeast Asia and India are given the chance to compete against each other across five different disciplines—Bar Challenge, Culinary Challenge, Dessert Challenge, Barista Challenge and Sommelier Challenge.

Beduya, who’s been in the culinary industry for nine years, made the panel of judges led by Conrad Manila’s executive chef Thomas Jakobi swoon over his starter dish—Tuna in Chorizo Oil, Chlorophyll Jelly, Elderflower and Wasabi Crisp.

It was quite a complex rendition to dress up tuna slices with chlorophyll jelly. “I took out all the edible leaves from basil, parsley and spinach, and blanched them just to get the natural flavor of the leaves,” said Beduya, who’s a big fan of molecular gastronomy.

After adding lemon juice to the leafy mixture, he put in the gelatin to set everything beautifully. To balance the sweetness, Beduya poached the tuna in chorizo oil and added wasabi crisps that heightened the flavor.

Beduya then leveled up for the main course—Brasserie’s Surf and Turf, an indulgent mix of lamb and lobster. The deboned rack of lamb was cooked sous vide, seared, encrusted with pistachio nuts and served with smoke of rosemary essence. The lobster, combined with celeriac and shiitake mushrooms, was made into a ball and prepared sous vide.

“We were all impressed with the kind of dishes the participants came up with,” said Jakobi. “We gave them a free hand to cook whatever they like, whether Chinese, Filipino or Western cuisine.”

Beduya beat five other hopefuls from Conrad Manila’s food outlets—China Blue by Jereme Leung, Brasserie on 3 and the Banquet.

They were judged based on the recipe composition— preparation, technique, hygiene, culinary skills and creativity.

“The challenge underscores the importance of creativity and eye for detail in the way we work, and the dedication of our team members as the unique differentiator among contenders,” said Feurstein.

Jacobi added: “Competing is a good way to get in contact with fellow chefs from other properties, learn from each other’s experiences and improve their skills.”

For tuna: Poach tuna in chorizo oil for at least 2 minutes each side.
For chlorophyll jelly: Blanch all greens for at least 10 seconds then plunge in ice bath. Blend greens in thermomix and add lemon juice. Strain and set aside. Boil juice then add the jelly for it to set.
For elderflower: Saute veggies in butter. Add orange juice and elderflower. Reduce stock. Add saffron, salt and lime juice. Strain stock using a fine mesh, sieve and set aside.
For wasabi crisp: Overcook the rice. Add wasabi. Add in thermomix. Blend until totally mashed. Strain and lay in silpat. Dehydrate wasabi mixture until it crisps up.