What to look for in good sushi or sashimi | Inquirer Lifestyle ❮ ❯ 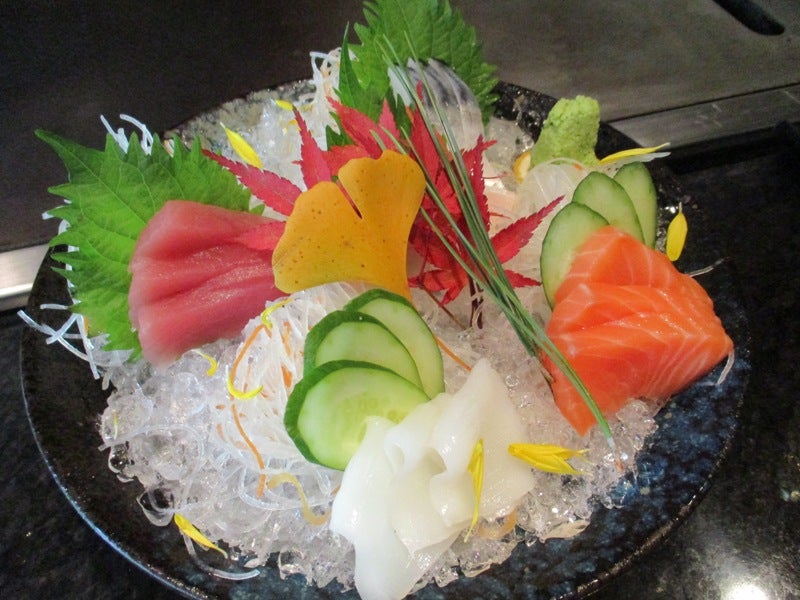 What to look for in good sushi or sashimi

A papaya boat stuffed with oysters? Perhaps only executive chef Wataru Hikawa of Inagiku in Makati Shangri-La can pull off such an unusual dish, and make it taste so exquisite.

But, after all, Hikawa was hailed as the Best Japanese Chef in Asia outside of Japan a few years ago. He has had 28 years of experience in renowned restaurants in Japan and Singapore, and has been with Inagiku for the past 18 years. As such, he has continued the tradition of serving fine Japanese food in a restaurant that traces its origin to 1866 in Asakusa, Japan.

For the media lunch held a few weeks ago, Hikawa created other amazing dishes as well. With the autumn season for inspiration, the meal was all about what is seasonal and fresh in Japan. It started with assorted appetizers that included gingko nuts, a piece of curled shrimp and salmon roe. The five kinds of sashimi that followed included raw salmon and tuna artfully arranged on crushed ice.

The platter of Aburi Goten, on the other hand, had sushi resting on dainty mounds of rice, topped with a light spreading of wasabi, mayonnaise and fish roe. Because it has been lightly torched, the salmon had an appealing, slightly smoked flavor.

Another course was the ebi tempura, fresh, hefty prawns coated in a light, crisp batter. However, it was quite unconventional because it didn’t come with the traditional tempura sauce of grated radish and tentsuyu sauce. Instead it was served with a small saucer of salt infused with green tea.

As for the oysters in papaya, it’s Hikawa’s own invention, and its recipe is a tightly guarded secret. However unusual it may be, when it came to our table, it seemed like a natural progression of the meal.

The oysters—flown in from Japan—were fat and substantial and were immersed in a creamy sauce that reminded me of sauce Mornay, complementing the oysters without masking their flavor. With its topping over the papaya lightly browned and caramelized, it looked initially like crème brûlée.

As marvelous as these dishes were, how to find something approximating them outside of Inagiku?

Here, some tips on what to look for in a good sushi/sashimi:
You must be able to feel and see the freshness. The chefs in Inagiku, said Ishikawa, can tell freshness from years of experience.
The fish should not have a strong “fishy” odor. The colors should be bright, not grayish.

The texture of the fish must be firm (it should not be soggy).

Much depends on the skill of the chef. The chef must know how to handle the fish, especially fatty fish like tuna.

Check the way the sushi is sliced. The slices should be neat and even.