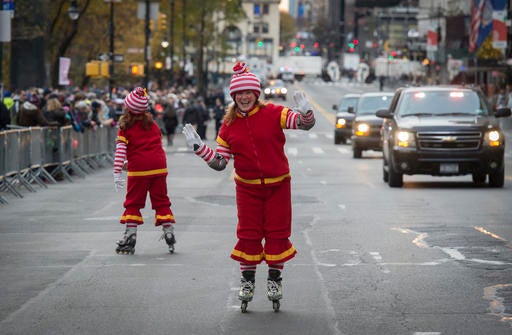 Thanksgiving parade kicks off in NYC amid tight security

NEW YORK — Thousands of people were surrounded by tight security Thursday as they lined the streets for the annual Macy’s Thanksgiving Day Parade.

Charlie Brown led the signature large inflatable balloons as the parade kicked off with the spraying of confetti and a ceremonial ribbon-cutting. Costumed characters mingled with revelers and crowds cheered as clowns on bicycles rode by carrying bundles of balloons.

Spectators, some 10 deep, lined the parade route, which starts on Manhattan’s Upper West Side and makes its way down to Macy’s flagship store on 34th Street.

The Charlie Brown balloon was one of three new giant character inflatables in this year’s parade and joined returning favorites including Thomas the Tank Engine, Hello Kitty and SpongeBob SquarePants.

But attendees also saw some somber sights, like the more than 80 sanitation trucks filled with sand placed at intersections and other places as barriers against any kind of attack. While the trucks have been used like this before — most recently to protect Trump Tower — the New York Police Department said they would play a bigger role at this year’s parade in the wake of the cargo truck attack in Nice, France, that killed more than 80 people and a recent posting in an English-language Islamic State group magazine that called the parade “an excellent target.”

There was a heavy police presence at the parade, including bomb-sniffing dogs and officers in uniform with assault weapons and portable radiation detectors. Officers in plainclothes were among the crowds of people.

Authorities said there was no confirmation of any credible threat and urged spectators to come out for the parade.

One prominent person who wasn’t in New York City is President-elect Donald Trump, who is spending the holiday at his home in Palm Beach, Florida. TVJ