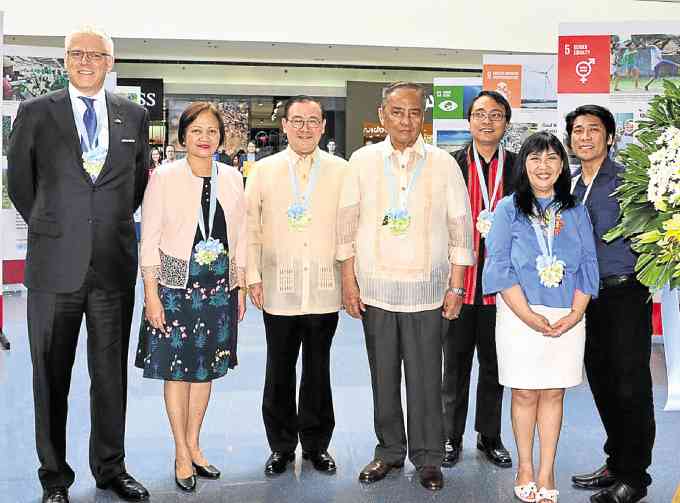 The United Nations exhibit, “71/17,” referring to the anniversary of the world body as well as its 17 Sustainable Development Goals (SDG), was mounted at SM Mall of Asia, naturellement. Done in collaboration with the Department of Foreign Affairs (DFA), the happening, dahlings, charted the progress of the United Nations in the past 71 years.

Raging Bull Chophouse & Bar like its name packs a punch with its selection of grain-and-grass-fed dry-age beef from sustainable farms in Australia. It opened in an evening filled with bites, booze, beautiful people and blues-themed music. Some of the guests included newlyweds Solenn Heussaff and Nico Bolzico, Colin McKay, Marco Lobregat, fashion plate Linda Ley, Julie and Gabriele Boschi, and gallery and boutique owners Joanna and Raul Francisco.

The retro-classic interiors of Raging Bull, designed by acclaimed New York-based firm AvroKO, gives you the nostalgic feel of a 1960s uptown Manhattan residence. It celebrates the art of wood and metal crafts.

Set apart from the main dining area, the eye-catching bar has a vibrant design aesthetic, dahlings. It shows a gritty yet chic feel at the same time.

The service was too good to be true. Waiters and waitresses even provided detailed explanation of the knives use for the kind of steak your ordered. Wow!

Complementing the prime meats is an extensive well-curated list of classic American cocktails, whiskey, bourbon aged in barrels and a strong wine list that truly give guests a unique kind of taste adventure.

Another new dining destination at Shangri-La at The Fort is Samba.

The bold and colorful flavors of Peru came alive. We were treated to a fiesta of live ceviche, anticucheria (freshly grilled skewers), arroz con mariscos and fresh seafood. All of the food was superbly prepared.

Vicky Zubiri was so impressed with the food that she later brought her entire famille along later, including her grandchildren.

Beaming with pride with his hotel’s success story is general manager John Rice as well as communications director Lesley Tan.

Rita Dy is now the president of Zonta Club of Makati and the club recently launched its campaign, “Zonta Says No to Violence Against Women (VAW) Campaign.”

The dining festival will be until Dec. 10.

“Diners should check the special No to VAW Orange dish, drink or dessert,” Dy said. Proceeds from the special sale of dishes and desserts will go to Cameleon Association, a French nongovernmental organization  devoted to rehabilitating sexually abused girls age 5-17 in Western Visayas, she explained.