Dinner with the Rockefellers amid splendor of Old Manila | Lifestyle.INQ ❮ ❯ 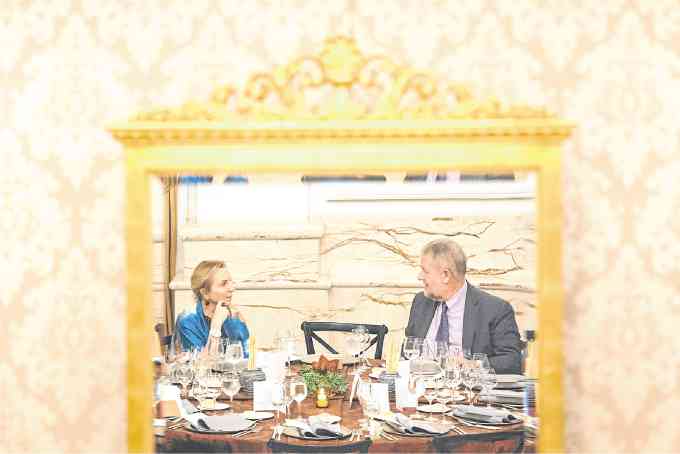 Dinner with the Rockefellers amid splendor of Old Manila

Imagine fine dining with the country’s best emerging artists in a palatial jewel box right at the heart of Old Manila.

Organizers of the Asian Cultural Council Philippine Foundation, Inc.’s (ACCPF) 15th anniversary celebration scored high when they chose Ayuntamiento de Manila as venue for the introduction of David Rockefeller Jr. and Wendy O’Neill, scions of one of America’s most prominent families, to Filipino artist scholars of the organization on Nov, 17.

The historic building, a stone’s throw from the Manila Cathedral, now houses the Bureau of Treasury.

It served as the country’s premier seat of legislation during the Spanish times. It also housed the Bureau of Justice and later, the Supreme Court before suffering great damage during World War II.

A series of restorations followed and was eventually completed in 2013.

Now tucked inside its neoclassical facade is a red-carpeted staircase that leads to an impressive function room with a black-and-white checkered marble floor, pristine white walls and high ceiling with majestic crystal chandeliers.

In this perfect setting for a fairytale wedding or a debutante’s ball, ACCPF’s guests who included business tycoons, philanthropists and at least one National Artist were feted to an evening of music.

Rockefeller, a one-time chorister of the Cantata Singers in Boston, watched in admiration as the Philippine Madrigal Singers serenaded guests with a medley of songs rearranged to highlight the expert blending of the artists’ voices.

Carissa Adea, ACC grantee for dance in 2014, performed a breathtaking ballet/modern dance number set to an arrangement by fellow ACC scholar for music Teresa Barrozo. Adea’s barely there costume was fashioned by ACC grantee for visual arts Leeroy New “from found materials at Harrison Plaza” just hours before the dinner.

ACCPF chair Ernest Escaler said ACC and the Rockefellers have been giving grants to deserving Filipino artists since 1965. “To date, we have given close to 190 grants through the years. From 1965 to 2000, ACC gave roughly 80 grants and since ACCPF was established, we have given 111 grants in the last 15 years,” he said.