Love among the ruins in ‘The Tempest Reimagined’ | Inquirer Lifestyle ❮ ❯ 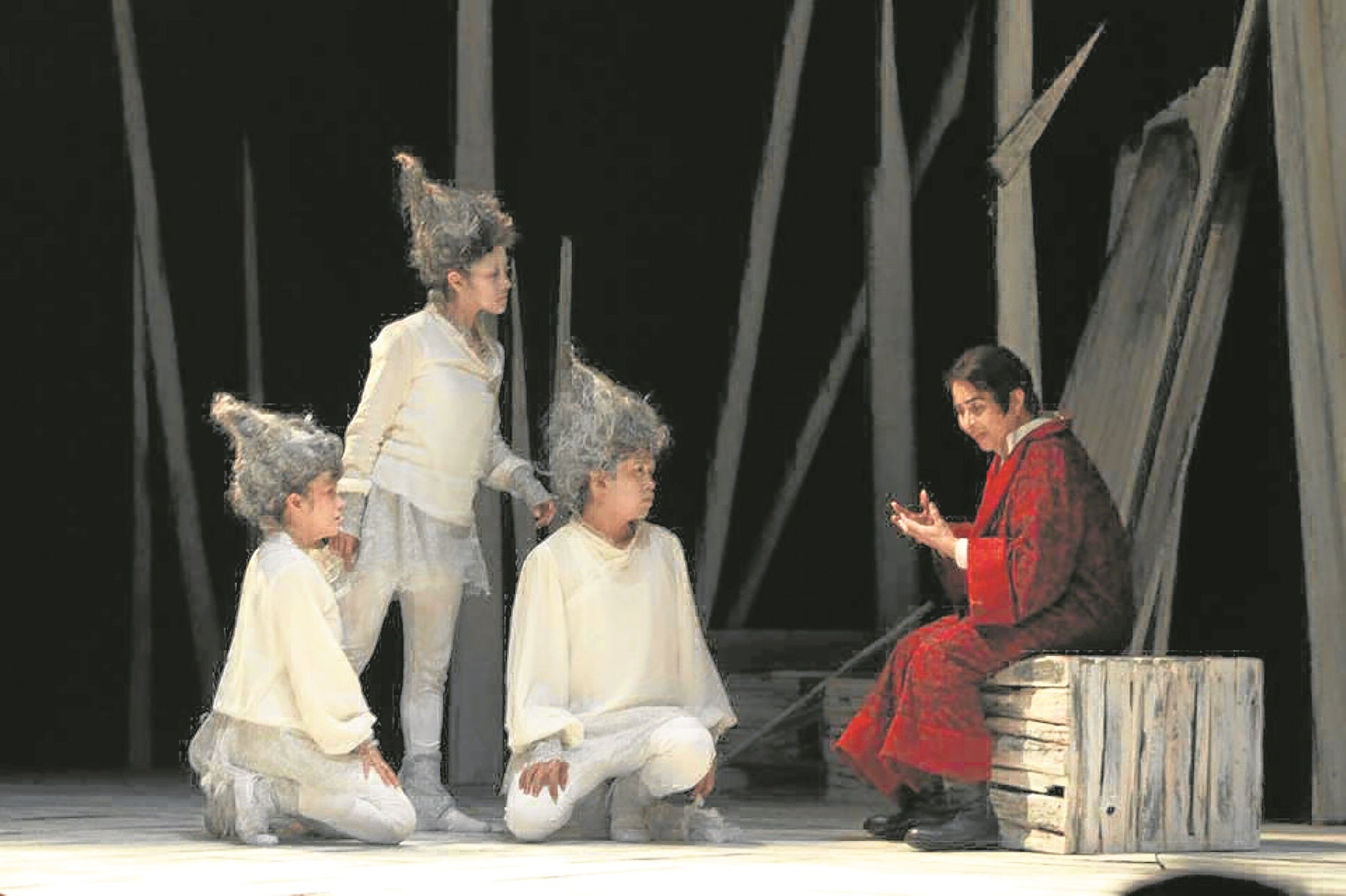 C.B. Garrucho (right) as Prospero in a scene from Peta’s “The Tempest Reimagined,” directed by Nona Shepphard—PHOTO FROM PETA

Love among the ruins in ‘The Tempest Reimagined’

Making Shakespeare more relevant or relatable to a younger audience is always a challenge for theater companies.

In its reimagining of “The Tempest,” the Philippine Educational Theater Association (Peta) takes the bull by the horns by shortening the performance time to a breezy 90 minutes. It interweaves the Bard’s magical tale of love and revenge with one of the most devastating disasters to have struck the Philippines, Supertyphoon “Yolanda.”

The original English text alternates with translations done by Liza Magtoto. And in case anybody gets lost in the tide of events, a fisherman-narrator who can swim into both worlds steers them back into the plot.

Mastery of the occult

“The Tempest’s” storyline has the fallen aristocrat Prospero (C.B. Garrucho) bringing the people responsible for his reversal of fortune into his isolated island for his long-planned revenge. This shipwrecked crew includes the queen who ousted him (Jenny Jamora) and his own treacherous brother Antonio (Renante Bustamante).

Prospero’s control of the island, its elements and creatures, stems from his mastery of the occult, learned during his years of exile.

The second storyline shows the inhabitants of another island who had refused to leave it despite warnings of a monster storm. Afterwards, they pick up what remains of their lives, rebuilding homes from nothing and burying their loved ones while enduring the abuses of opportunistic officials.

Directed by the United Kingdom’s Nona Shepphard, the result is an engaging, if occasionally flawed, production that does seem to win its student crowd over. Peta’s keen understanding of Philippine society, its use of street-smart tropes and language and other homegrown theatrical devices, can strike a chord in the Filipino heart—and, in this case, keep the play going.

The desperation of the typhoon survivors, in particular, hits the gut of anyone who had personally experienced the calamity, or even merely seen it on the news. Yet a few scenes later, an awkward teenage romance draws laughter and cheers from the audience.

In this seething environment, strip away the veneer of civilization and the characters’ true nature is exposed—from the queen’s nobles looking for chances to kill her, to Prospero himself enslaving the island’s original inhabitants to make it his home, effectively doing to the natives what his disloyal friends had done to him.

The backdrop is a bleak stage  festooned with huge strips of white canvas, meant to underline how nature can turn from friend to foe in a heartbeat.

Shakespeare resolves the story through a change of heart by Prospero, who is moved by the romance between his innocent daughter Miranda (Yeyin de la Cruz) and the queen’s dashing son Ferdinand (Brian Sy). Some Shakespeare scholars have described this romantic subplot as equally if not more poignant and tender than that of the more famous Romeo and Juliet.

The power of love rising from the ruins is thus presented as the answer to all the chaos. The second storyline echoes this, with the survivors finding someone or something worth loving again—another person perhaps, or even their native land.

The happy ending, however, can feel too neatly tied up. The Miranda-Ferdinand romance is unconvincing as the key that changes Prospero’s heart; Garrucho’s ice king projects vindictive majesty, but his soul-searching appears scant and shallow.

And while the ensemble hits all the right notes, the merging of both worlds to show that love overcomes hatred and fear eventually comes off as rather forced and rushed. The issues in both storylines deserve dissection, but the power of the text and the translation needs space and time to effectively work.  —CONTRIBUTED