How I finally went to hear Mass again–in, of all places, Japan | Lifestyle.INQ ❮ ❯ 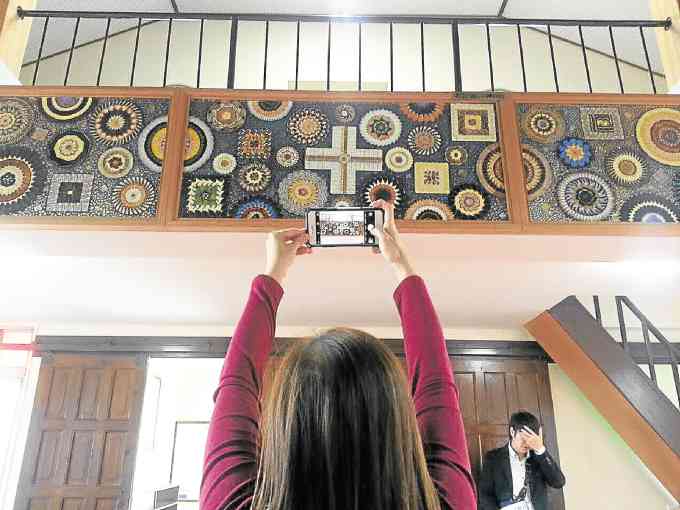 Mosaic of butterflies adorn the interiors of Yamada Catholic Church. Butterflies are symbols of resurrection in the Catholic faith.

How I finally went to hear Mass again–in, of all places, Japan

I stopped going to church last year for no profound reason but sheer sloth. But, breaking the habit, I finally went to hear Mass again in, of all places, Japan.

The Mass was in Japanese, at 6 a.m., in a quaint chapel on a mountaintop in Hirado, Nagasaki. It was an autumn morning, the wind was chilly, but the first rays of the sun were passing through the stained glass windows on the altar.

After the service, the priest welcomed the Filipino pilgrims, and wished us a safe journey. The parishioners even invited us to have coffee and cookies.

The warm welcome was probably in order. Hirado is a city of 32,000 and home to very few Christians.

The city was the complete opposite of the crowded streets of Tokyo. Hirado itself was a perfect retreat from the daily grind of work.

We saw more cars than people in Hirado, and when we finally saw schoolchildren with their randoseru (Japanese backpacks), we were so glad to take pictures.

Hirado was a trading port between Japan and Portugal in the 16th century.

Our guide, Sanryo (pronounced like the Japanese brand Sanrio), said that Hirado is the counterpart of Cebu in the Philippines.

Hirado’s feudal lord welcomed the Catholic faith in hopes of strengthening trade relations with other countries, especially Europe. Missionaries went to spread the word of God and built churches.

But when the Matsura clan took over Hirado in the late 16th century, the daimyo (chief) issued an edict banning Kirishitan (Christians). Christianity, he believed, was the antithesis to Buddhism, which was then Hirado’s dominant religion.

The persecution intensified in the 17th century. Christians were body-binded and dropped on boiling springs; children and women were burned alive; still others were hung in a pit of muck.

And yet the Japanese Christians did not waver in their faith. For 250 years, Christians practiced it in secret, pretending to be Buddhists, but praying the novena once they got home.

Some hidden Christians in Hirado sought refuge in Kasuga Village. Today, the valley, which is cultivated for agriculture, resembles the Banaue Rice Terraces.

Mt. Maruo, a short hike from the valley, offers a 360-degree view of the old Christian refuge. On the summit is a marker of ancient graves where the hidden Christians are buried.

We trekked the mountain, just like when ancient Christians climbed hilltops to be closer to the heavens.

It was only in 1873 that the ban on Christianity was lifted, and the 20th-century churches in Hirado are proof of the resurgence of the Roman Catholic religion. The old churches have become shrines of martyrs.

Among the shrines in Hirado is the Sacred Place of Gaspar, the resting place of the martyr Gaspar Nishi. It is marked with an elevated cross, also overlooking the sea.

Behind the large cross, a couple of steps from the marker is a traditional tomb covered in rocks, the grave of Nishi.

Today, despite the dwindling number of Christians in Hirado, churches have become tourist attractions for Catholics and non-Catholics.

According to tour operator Japan Discovery’s Irene Ladignon, the ecclesiastical structures are architectural marvels in Japan—striking contrasts to the traditional Japanese houses and centuries-old Shinto shrines.

St. Francis Xavier Memorial Church, a Gothic-inspired structure dedicated to the Jesuit missionary, is a popular wedding venue in Hirado. Although known for its grandeur—it is among the highest buildings in the city, towering over the surrounding 17th-century Buddhist temples—it caters to a small community of some 2,000 local Catholics.

The Japanese churches in Hirado may be Western in architecture, adorned with stained glass from Italy, but Japanese Catholics observe tradition by taking off their shoes before entering.

The late 19th-century architect Tetsukawa Yosuke designed many of the churches in Hirado, including Tabira Church and Yamada Catholic Church. Although both Romanesque structures, they have distinct styles not just on their facades, but also the interiors.

Tabira Catholic Church, constructed shortly after the ban on Christianity was lifted, was completed through local contributions. The church currently hosts only 200 parishioners.

The church sits on a hill overlooking the sea. The altar is decorated with stained glass images that honor Santo Tomas Nishi and the Philippines’ San Lorenzo Ruiz.

Yamada Catholic Church is smaller in size, but the interiors are no less remarkable. Mosaics made of thousands of butterfly wings by priests more than 110 years ago are displayed inside the church.

If butterflies symbolize resurrection, these creatures symbolize the Catholic faith restored in Japan.