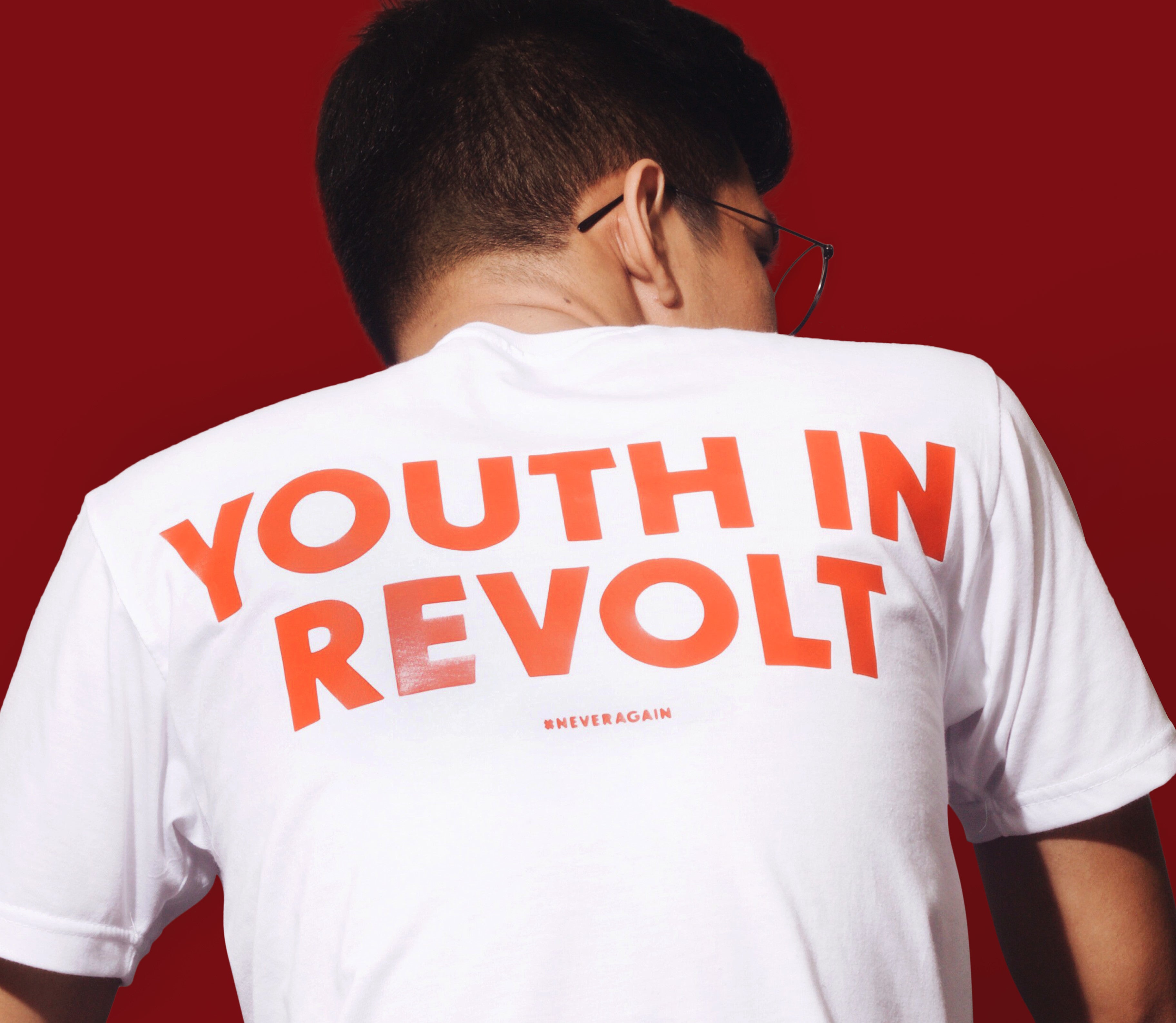 “I’m glad that I’ve managed to find a medium of protest that utilizes the values they’ve taught me,” says Monica Magsanoc, who designed this T-shirt to benefit martial law victims.

Their ‘lola,’ Letty Magsanoc, would be proud

To use a fallacy perpetuated by internet trolls, Monica Magsanoc wasn’t yet born during the Marcos regime. She could not have experienced the atrocities of martial rule, ergo her outrage over the stealth burial of the despot on Nov. 18 at Libingan ng mga Bayani is undue and misplaced.

While the first part of that argument is true, it is, however, the many stories told by their late grandmother—a woman who fiercely fought the dictatorship—that compelled Monica, 20, and her sister Mica, 15, to make a stand and mobilize themselves in protesting the Marcos burial, and continuing to fight a battle their lola thought “was already won.”

The granddaughters of Letty Jimenez Magsanoc or LJM, People Power icon who fought the Marcos dictatorship, and longtime editor in chief of the Inquirer before her passing in December, last week designed and printed T-shirts bearing the words “Youth In Revolt #NeverAgain” on the back, and “Not A Hero” on the front.

“Being the grandchild of an anti-Marcos icon has had a significant impact on me,” says Monica, LJM’s oldest grandchild, and a visual communications major at University of the Philippines Diliman. “My sister and I felt personally responsible for continuing to combat the injustice that our lola fought so hard to defeat.”

She adds: “With her writing, she’s shown us that the simplest of actions have the potential to spark the greatest of revolutions. We’re hoping that our project will empower others the way her writing has inspired us.”

When word got out on social media about the siblings’ little project, orders came pouring in.

At press time, they have stopped taking orders for the T-shirts. They have been swamped with orders from over 1,000 individuals.

All proceeds go to the victims of martial law, coursed through the volunteer group, RockEd Philippines, and FIND (Families of Victims of Involuntary Disappearance).

Asked if she feels that her generation has adequate knowledge of martial law, Monica says: “I believe that while a certain demographic of my generation possesses adequate awareness of the martial law atrocities, a great sum of others still remain in the dark.”

But it’s not a lost cause, says this young woman. “The youth must be responsible for creating conversation, be it online or in person,” she says.

“Call out your apologist friends, engage in open debate with indifferent family members, back up your opinionated Facebook status with substantial research—anything concrete that will encourage others to truly discern the matter at hand, and cause them to reflect on their misguided beliefs. Rather than propagate hate for the uninformed, take one’s ignorance as an opportunity to change his or her mind-set toward the issue.”

Luckily, she adds, she hasn’t been at the receiving end of internet trolling following the story of her T-shirt movement.

The Magsanoc siblings grew up aware of social issues, through stories told by LJM.

As a journalist, their grandmother had a front-row seat to, and firsthand experience of, the the Marcos dictatorship. She recounted these to her children, and later her children to their own.

“Every inch of the project is dedicated to her,” Monica told L’Officiel magazine. “As part of a younger generation, one can’t help but feel impotent and unimportant in times like these. I wanted to take our feelings of disappointment and anger and turn them into a concrete plan of action and sustainable channel for support.”

She also told the magazine, “Our voice differs from those that came before us because of the hundred new channels of communication that we have. We continue to innovate the medium of protest and utilize new forms of media to empower the new generation.”

Amid Monica’s work on her thesis and Mica’s own school projects, the sisters get together at night to process orders, and “reply to hundreds of e-mails.” The elder girl handles the creative and promotional part; the younger one does the logistics.

“We’re juggling more than a thousand orders so we’ve had to put a lot of things on hold—my thesis, her school reports and work for our respective organizations. But, thankfully, one of the things our Lola Letty always taught us was how to pull everything together at the very last minute!” Monica says.

The entire family has been supportive. “In fact, I think they’re more articulate about it online than I am! I owe a lot of who I am and how I think today to them, and I’m glad that I’ve managed to find a medium of protest that utilizes the values they’ve taught me.”

She also credits her activism to her liberal education at the State University. “I’m incredibly grateful for my UP education. We stand as one of the leading universities not because we are taught what to believe in or which issues to fight for, but rather because we are encouraged to freely express our opinions, represent our differences, and learn from one another in the process.”

The Magsanoc sisters have yet to join a protest rally. They’ll have their first taste of a political assembly, as a family, on Nov. 30 at the People Power Monument—in their “Youth in Revolt” T-shirts, naturally.

LJM would be proud.