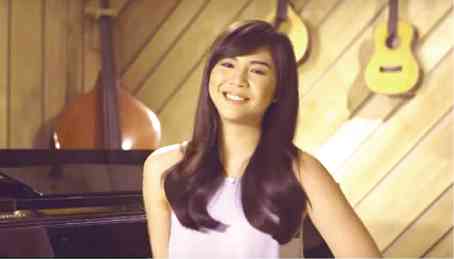 “My mom was taking a nap when someone called her mobile. The number was a foreign number that she didn’t recognize. She almost didn’t answer it, but it turned out to be Disney,” says Janella Salvador of the fateful call that would land her a coveted role.

It was a good thing her mom, “Miss Saigon” veteran Jenine Desiderio, answered the phone. Janella is Disney’s pick to sing “Moana’s” theme song “How Far I’ll Go” for the Philippine market. She is one of the five singers from Southeast Asia that were asked to create localized versions of the theme song. In other parts of Southeast Asia, like Thailand and Indonesia, the girls who were selected don’t just cover the theme song, they also become speaking voices for Moana in their native languages.

This is not Janella’s first project with Disney. The 18-year-old actress/singer represented the Philippines to sing Hong Kong Disneyland’s 10th anniversary theme song, “Happily Ever After” in 2015.

The music video just dropped last week on YouTube and after watching it, we couldn’t believe that Janella only had that same day to learn the music and lyrics before filming her performance. “I recorded it on the spot; everything was very confidential. I love the song’s message, it had so much heart. I’m very proud of this project.”

For Janella, the song wasn’t just powerful because of its soaring chorus and inspiring lyrics, she also felt a kinship with Moana. “I think everyone will be able to relate to Moana. The movie’s lesson is basically to follow your heart. There are a lot of people around us telling us, ‘This is who you should be.’ Everyone’s gonna judge you and your life but what you’re going to become will actually depend on you. You will choose who you’ll become talaga.” —TATIN YANG