After 20 years, it was a grand exit for Louie Mamengo | Inquirer Lifestyle ❮ ❯ 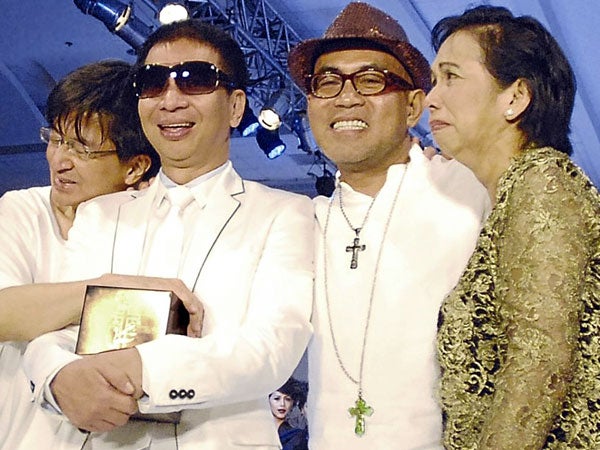 After 20 years, it was a grand exit for Louie Mamengo

HIS ASHES took a bow at the finale,” remarked Pepito Albert at the fashion show of fallen comrade Louie Mamengo.

His ashes were in a golden box with Chinese symbols, as brothers Joey and Audie Espino, with Louie’s sister Rosalinda Perry, tearfully closed Philippine Fashion Week with a homecoming collection for Mamengo, who was diagnosed with lung cancer in December of last year, and who died on March 7.

Mamengo and the Espino brothers were childhood friends and neighbors on Donato Street, where many fashion designers lived in the ’80s. It is said that Mamengo would secretly steal Gary Flores’ choreography notes during Hyatt rehearsals for luncheon shows and give it to Joey, who, at 22, finally directed Mamengo’s gala show at the Philippine Plaza Hotel, the de rigueur fashion show venue in the ’70s.

This writer remembers bonding with a soft-spoken yet very daring, funny and original Mamengo and Pepito Albert in Los Angeles in 1987, when Albert was awarded Rising Star Designer by the LA Press Association.

I remember going out to clubs with Louie and Pepito; the big news then was the purchase of the Beverly Hills Hotel by the Sultan of Brunei for $48 million. Whenever we would go to clubs, Louie would telephone beforehand that the party of the Sultan and entourage would arrive at the Detour, Stock Exchange and Flaming Colossus, the top snob night clubs in the ’80s.

Then we would put on turbans and gilded sarongs and jackets, and the velvet ropes always parted when we arrived.

I spoke to Louie’s sister Rosalinda just before the show, and she said Louie was so excited about this particular show, as it was to be his triumphant return to the local fashion scene he left two decades ago.

He finished the 35-piece collection of mainly black couture numbers from his deathbed at the hospital.

The Espino brothers were friends to the end, taking note of every detail Louie wished for, from hair elegantly swept up, to the sexy attitude in choreography, even the music to be used.

Audie Espino told me right before the show to reserve the seat beside me for Louie, and save it I did. This was his final couture collection.

Mamengo knew he had an uphill battle to fight. Like a warrior, he triumphed over all odds. It was a spectacular last hurrah. What an entrance back

in Manila. And what an exit.