Komikon has uncannily grown to twice its size and twice its duration; it is now held at the Bayanihan Center in Mandaluyong City. While in the past, Komikon tables have been filled with back issues (foreign comics) and new issues (local comics), this year’s tables were full of merchandise: magnets, sketches, postcards and lots—lots—of T-shirts (the coolest of the cool being Art Initiative’s “The Mythology Class” shirts and Evil Genius’ “Trese” Kambal shirts). Look at all these well-dressed people.

Now, it seemed apparent that Pinoy fans were not just willing to read or watch, they were now ready to wear and proudly show off their fandom.

Komikon organizer Sherry Lee Baet-Zamar says this year’s edition boasted 70 tables and that they “try to focus still on comics, and we have a lot of artists coming in. They have invested in the market,” adding this was a positive development. While in the past year, Komikon grew in terms of numbers, this year, it grows in terms of diversity.

Of course, comic books remain the currency of the day, and for the many aspiring Filipino creators, ambition remains high. A good example would be Peejay Catacutan’s “Buster,” an action-packed sci-fi dystopia series set in a future Philippines; Komikon saw the series’ second issue make a landing. “It talks about things that would happen if we as Filipinos don’t change our ways,” Catacutan explains. “As a nation, we’re prone to destroying ourselves.”

The titular Buster is an huge armored vehicle that stands as the only safe haven in the burnt-out wasteland that used to be the Philippines. Plus the crew has recruited a doctor from the past named Pepe (he is exactly who you think he is) to help the cause. Catacutan hopes to produce nine issues of “Buster.”

An alternate history of the Philippine lies at the heart of the Komikon’s buzz book “BGMBYN” No. 1, from Redge GDN Tolentino and Jap Mikel. Tolentino explains the book’s AR 1896 setting thus: “We start off with our heroes, being everyday people who care about themselves, as thieves because they see the rules don’t work for them. So how does someone start out as a thief then end up stealing back the country’s freedom? Or an imposter and suddenly caring about people who cannot benefit them, and why?” This book is just Act 1 of the first book of a trilogy. 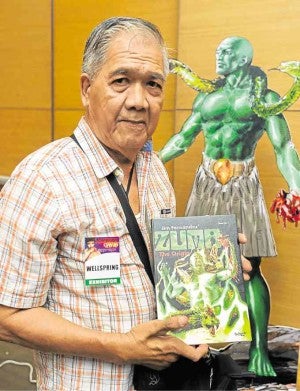 It’s only of the many quirky offerings making their first appearance at Komikon.  Check out all these new titles: “Sandali” from Man Curtis Comics, “The Jesus Rocket” from Marguerite Alcazaren de Leon, “P*cha E Di Komiks” from Toto Madayag, “Fill In Feelings” by Loser Mangaka, “Callous: Braving Life One Cup at a Time” by Carlos Jose San Juan, MD. That’s just a taste.

There is also “Uberman,” the superhero-themed novel by Zeno Antonio Denolo (aka, Zero AD) which received the special jury prize at the Cirilo F. Bautista Prize for the Novel. “Uberman” arrived at Komikon in an illustrated edition from Anvil Publishing Inc.  Adarna House’s Anino Comics imprint released two titles: Trizha Ko’s “Dolly & Lavinia Explore the Interverse” and B. Redila’s “Melag.”

There are other Komikon traditions, such as standing in line to get your book signed by Manix Abrera. The indefatigable Abrera remains Komikon’s biggest draw, as he winds up signing books pretty much from the start to the end of Komikon. This year, he is signing copies of his newest book, “Kikomachine Komix Blg. 12: Mandirigma ng Tadhana,” the 12th collection of his “Kikomachine” comic strip, which appears in  Inquirer and is collected by Visprint Inc.

This one comes with two variant covers. As usual, the line for Abrera’s autograph is impressive. At the very end of the line, a guy named Mark explains why he’s lining up: “This line is not long. I’m from University of the Philippines, so this is nothing. Also, this is Manix, c’mon, you can’t go wrong. He’s one of those artists who, even at volume 12, still doesn’t get old.”

Also from Visprint is the great title, the graphic novel “After Lambana” from writer Eliza Victoria and artist Mervin Malonzo. “It’s different from my other work because the setting in my work such as ‘Tabi Po’ is usually set in the Spanish era, amid bahay-kubo and fields,” Malonzo says. “This book is set in the present time, a modern but magical Philippines. You can immediately see it’s different. Since Eliza Victoria wrote it, her voice and style is evident, and it’s very different from work just by me. I enjoy collaborating.”

Victoria agrees about the book’s setting: “It’s an urban setting but it has characters which are connected to the rural setting, like the sirena and the diwata. I put them in an urban setting, and just watch how they interact. And there’s the timeframe also, because it occurs in one night. This volume, if you buy it, it’s not bitin. The story is finished.”

Perhaps the most extraordinary find at Komikon 2016 is the new origin story of the iconic snake-themed character Zuma: “Jim Fernandez’ Zuma The Origin” No. 1, from Wellsprings Publishing. Co. It tells how Zuma was born to the Uztak Empire 7,000 years ago. It’s a fearsome tale for people who only know Zuma as the villain played in the movies by the late actor Max Laurel. Here, Zuma is both bloodthirsty and powerful, and his story is told in English.

It’s written and drawn by the same team who drew Zuma for GASI Publication back in 1977: writer/creator Jim Fernandez and artist Hal Santiago. While Fernandez is now based in Canada, veteran komiks standout Santiago was telling his story at Komikon.

“We worked on it just earlier this year. People need to know the real origin of Zuma, so they don’t forget him,” Santiago explains. “The way it’s been done now is very pretty.” Wellsprings Publishing intends to publish an entirely new Zuma series for contemporary readers. The book’s ending does promise: “Zuma the Origin concludes, but more Zuma adventures are coming!” There is something remarkable about how old-school Santiago’s detailed art is, but the tale being told is both edgy and very modern. 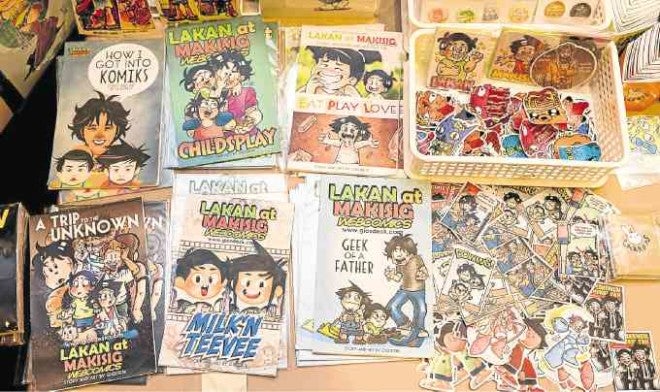 The farther out you walk, the more you find at Komikon. More aspiring talent waits patiently to be discovered at the indie komiks tiangge. In an adjacent room, you can view reinterpretations of classic Mars Ravelo characters such as Darna, Lastikman and Captain Barbell by artists such as Lan Medina, Ian Sta. Maria, Arnold Arre and CJ de Silva. There were even cosplayers dressed as Ravelo’s characters. In the room next to that, one can watch the animated work of iconic creator Arre. Everywhere you go, people are renewing acquaintances, talking shop and talking fandom.

In some ways, Komikon is a big geek reunion. There are familiar faces, such as the Komikero himself, Gerry Alanguilan, “Pugad Baboy” creator Pol Medina Jr., or Carlo Vergara, whose much-awaited next Zsazsa Zaturnnah volume will be out next summer. This year, Komikon did, indeed, miss a few friends: founding member Ariel Atienza was home recovering from surgery to fix a fracture and “Trese” writer Budjette Tan was in Billund, Denmark, working for Lego. But for the rest, it was a great time to share in the united worship of things fantastic, futuristic and Filipino.

Look at all these well-versed people. Perhaps then the perfect distillation of Komikon’s diversity and its ambition is the glossy magazine start-up Mawmag: Your Guide to Pinoy Geek Culture, which debuted its first issue at Komikon.

Managing editor Chris Dela Riva says they hope to offer up Mawmag quarterly. It’s a labor of love that they’ve pooled their money and effort into. “It focuses on a Pinoy-centric view of the geek community,” he says. “You get all the aspects of geekdom—comic books, movies, TV, gaming—and some things—Pinoy wrestling—that you can’t find anywhere else.”

In that sense, Mawmag really does reflect the new age of geekdom that Pinoy fans celebrate at Komikon.

“We embrace all kinds of Pinoy geekery,” he concludes. “Everyone’s a geek.”