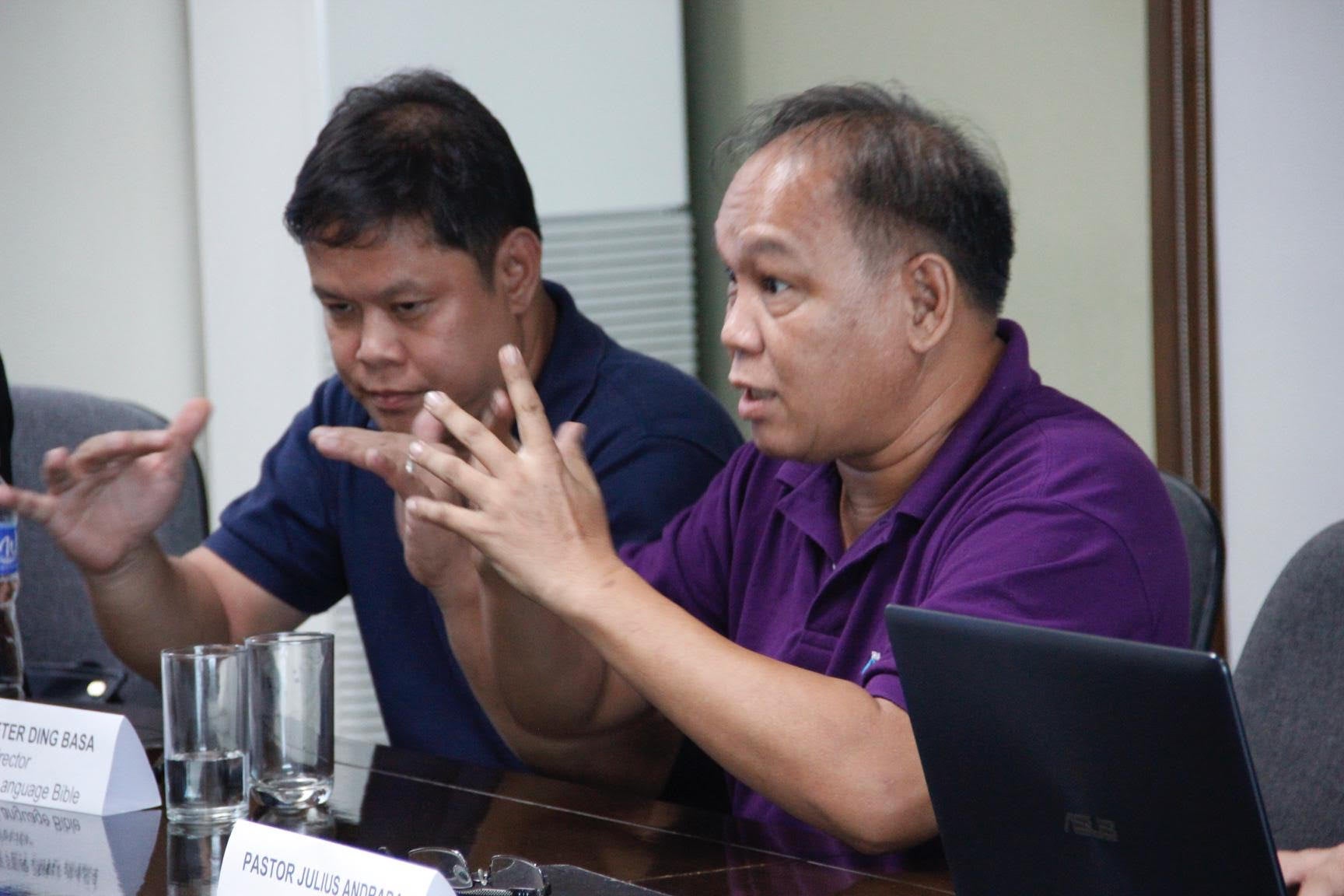 Group launches Bible for the deaf, asks help for funds

These are things deaf pastors Julius Andrada and Peter Ding Basa—one of the 50 deaf pastors in the Philippines who were never heard preaching, who never answered a phone call nor called a person by name—exactly know how.

In their world of only signs and actions, and most of the time, silence—devoid of hearing, of beautiful music and kind words—they still can actually bless people, encourage and love.

And even with incapacities, they teach their fellow deaf as if they were the most capable and limitless—with God.

UBS is a global alliance of around 150 international Bible societies and operates in 200 countries, including the Philippines. The Philippine Bible Society is headed by Retired Chief Justice ReynatoPuno.

The Bible for the Deaf would be a digital translation featuring a lone interpreter per story in the Filipino sign language. Each story would be around 3 to 5 minutes. The video does not have a subtitle.

The fundraising has started last Friday during Philippine Bible Society’s 117th anniversary held at the Christ Commission Fellowship, wherein aside from thanksgiving and worship service, the group also cast out its vision and needs for the Bible translation project.

Born deaf, Andrada and Basa teach about the Bible only through sign language.

As most of their attendees are unable or having a hard time reading, the pastors would not require them to bring or read a Bible, but would tell the Deaf Bible stories through hand gestures and facial expressions like a real story teller.

Every week, both of them have their own cell group or bible study group where they counsel to the deaf, talking about God’s love and plans for them.

Andrada is part of the deaf ministry of the Capitol City Baptist Church in Quezon City, Christ Commission Fellowship (CCF) in Pasig, and Philippine iYewon Church in Bian, Laguna. Basa, meanwhile, is part of the Dasmarinas First Assembly of God in Cavite.

“Everything is relayed. It’s really hard to preach without a Bible, because they cannot study the Bible themselves. They cannot reflect and meditate on their own,” Andrada told the Inquirer through an interpreter.

There were times some believers backslid because they do not understand the Bible or were confused, Basa added.

“With the Bible for the Deaf, relaying God’s message would be easier. We can rest,” Andrada said. Both pastors raised and shook their hands on air smiling, in response as if agreeing to several benefits the Deaf Bible would make for their community.

“Before, I got envious of my siblings because I was left at home to dothe chores while they were sent outside to study and play,” Andrada said.

Things, however, changed when he got to know God through his Sign Language teacher in the Maranatha Church when he was 14. Now at 50, Andrada has been a devoted pastor for more than 20 years. He was not interested in becoming a pastor until he received God’s word from Acts to go and preach to the world.

Andrada’s wife May is one of the featured interpreter for the Bible project. His son Jules Vincent Andrada is also an active interpreter. Jules and his mother both hear and speak but are one with Andrada in his vision of spreading God’s word.

“Before I became a Christian, I used to question God. Why did he make me Deaf? Why am I not normal? I was so depressed. I wanted to die,” Andrada recalled asking God before.

He, however, received a word through the story of Moses who refused to preach because of his speech problem.

And these same questions, he said, are the exact questions believers would also ask him at first encounter.

Most of the Deaf have problems with insecurity, are doubtful, confused, sensitive and thus the need to hear God more, he added.

When discouraged, I share Philippians 4:2 to my Deaf church members:“I can do all things through God who strengthens me.” “This was my saving grace,” Andrada said.

So far, there are over 400 sign languages used by 70 million Deaf people worldwide (but) only around two percent of those have heard or received God’s word, Dale said.

There is no complete sign language Bible yet and only the New Testament is available in the American Sign Language, he added.

In the Philippines, there are an estimated 1 million deaf people and most of them have not yet heard of the Gospel. “Think of the Bible verses and Bible verses which encouraged you when life is difficult…This is the experience of most Deaf in the world; God has not been revealed; His message is still out of reach,” Dale said.

Billy Dorsey, a Grammy-award winning singer and songwriter also performed for the charity event at the CCF last Friday. He is part of the UBS and has travelled various countries to spread the mission. The Company and the Capitol City Baptist Church Deaf Choir also performed at the Friday’s fundraising event.

Gunnar Magi, marketing and brand manager of the UBS, said the visual translation of the Bible for the Deaf is very difficult since it needed good researchers and translators. Magi said in their study, some of the Bible’s messages have been lost in translation because of the lack of Bible. Some insights were not exactly accurate or Bible-based, he added, thus some Misconceptions. The revelations, he said, would be captured and become more personal with Bible for the Deaf at hand.

So far, only nine of the 110 stories in the Bible have been translated and revised and would need more translators, experts to finish the 5-year project. The translation fund would cost at least $52,000 a year, Dorsey said.