‘Anyare’?: Why millennials are out on the streets–suddenly | Inquirer Lifestyle ❮ ❯ 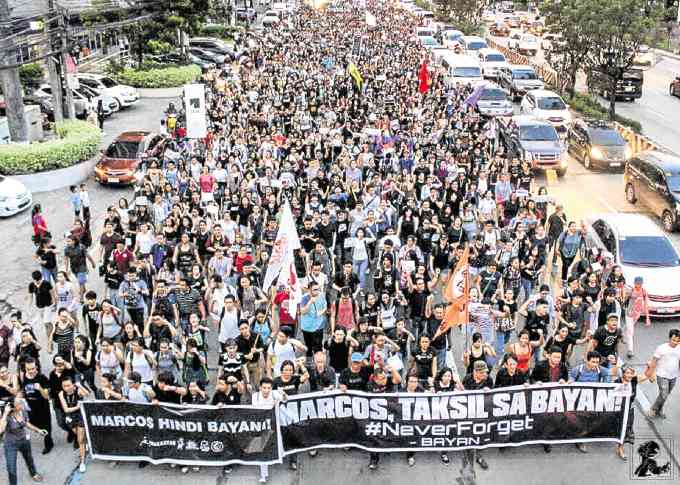 ‘Anyare’?: Why millennials are out on the streets–suddenly

The message came around midnight Nov. 19 on Facebook: “People are tired. We need food and water.”

The sender was referring to the “lightning rally” or the hastily organized mass action at the People Power Monument (PPM) at the corner of Edsa and White Plains Ave., Quezon City.

The crowd was composed mostly of students from the University of the Philippines  Diliman, Miriam College and Ateneo de Manila University who were protesting the sneaky burial of the late dictator Ferdinand Marcos at Libingan ng mga Bayani (LNMB).

The rally started 5 p.m. of Nov. 18, five hours after the nation woke up to a startled media whose reporters were scrambling to add to the scant details about the burial—which had sparked widespread anger at a controversial Supreme Court decision on Nov. 8 that dismissed the  petitions to stop it.

In the office, just about to finish putting the paper to bed, Raoul and I looked at each other and decided to bring food and water to the rally, which apparently was still in progress.

It was cold and raining when we arrived at PPM. We approached the crowd huddled under umbrellas on the elevated platform. “Wow, puro mga bata ah… Mukhang mga sosyal na Atenista,” I told Raoul half-kiddingly about his alma mater.

The protesters, indeed, looked like millennials you would normally see at Starbucks fiddling with their gadgets, but not  standing in the rain and holding a placard that says, “Make busina for hustisya”—which they did that late night.

It was a scene that millennials themselves could capture in their own youthspeak to refer to   something weird and unexpected: “Anyare?”

Call of the times

As it turned out, there were students from other schools at the rally. And like their peers from UP, Miriam and Ateneo, they were promptly responding to the call of the times.

Even if, for instance, the Ateneo community in Loyola Heights was advised by its president, Fr. Jose Villarin, SJ, that “there are now more important things to learn outside the classroom,” many of those who marched to PPM were presumably well aware of current events.

Asked if he considered, even for a moment, the risk of getting hurt should things get out of hand given a phalanx of anti-riot police in front of them, James told Lifestyle via e-mail: “The greater risk was the danger of being remembered in history as one of those who bowed their heads and let such ridicule be committed against our people.

“I think that was the only consideration most of the young individuals had at that time. Marching on the streets to Edsa, for that particular purpose, allowed me to connect with my heroes, Ka Pepe Diokno, Ka Jovi Salonga, Sen. Lorenzo Tañada and others who struggled during the Marcos dictatorship.

“That brief moment we had on Edsa, denouncing the burial of the late dictator, the rhetoric, the grief, the disbelief and the conviction in our unity and cause, was but borrowed magic from those great Filipinos who fought for our democracy.”

As to the perception that, before Nov. 18, millennials were not politically conscious, James said: “I think that’s right, partly because the youth felt that the country was still plagued by corruption, which repelled them presumably due to their idealistic outlook.

“But that did not bar the youth from claiming their stake in our political processes. I think the demonstration on Nov. 18 was a clear expression that this time they are willing to commit whatever it takes to regain their place in influencing decisions that eventually affect them.”

Is he willing to keep marching in the streets to support a cause?

“The willingness is there,” he said, “but the real challenge is to innovate. We must contemplate the lessons of the past, particularly how government in Marcos’ time used the ‘radical’ demonstrations as one of the excuses for declaring martial law. If our elders fail to reflect on our history and blindly allow Marcos to be buried in the LNMB, then we must not return the favor by forgetting this valuable lesson. We must be the voice of sobriety… If the streets once again call upon the youth, then so be it, we shall answer.”

Such lucid thoughts are awe-inspiring. There’s reason to believe that the rest of the millennials in the Nov. 18 rally understand what James is saying.

Four days later, Cecilia Ejercito, a 26-year-old digital account manager, wrote about her experience in an article, “On Edsa on a Friday night,” in Inquirer. She quoted an acquaintance who told her: “‘Today we divide who among us has stood on the right side of history.’ That drove me to Edsa.”

It’s been a long way from the student protest movements that shook the world—from Paris to Ohio in the late ’60s, to the Diliman Commune and First Quarter Storm in Manila in the early ’70s, and, to a certain extent, Edsa 1 in ’86 and Edsa 2 in 2001.

Driving each of these events was youthful passion and energy.

That’s a track record in history that we must heed.