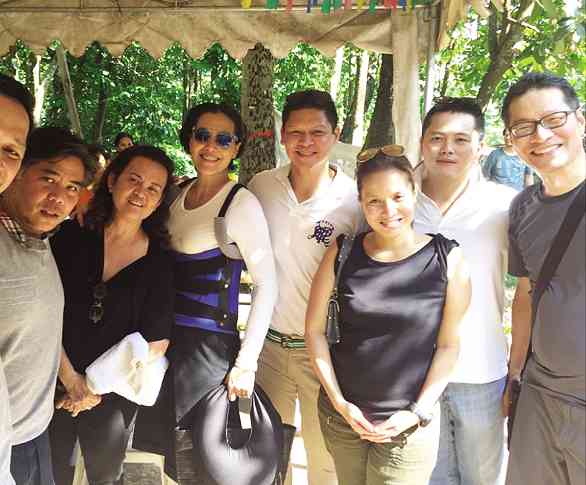 On a muggy Sunday on July 5, 2015, villagers of Cuenca, Batangas, noticed a helicopter plummeting to the ground. Suddenly they heard a crash in nearby Mt. Maculot.

The helicopter pilot, Felicisimo Taborlupa Jr., died instantly. The billionaire, philanthropist and owner of the chopper,  Archimedes “Archie” King, was left nearly unconscious, strapped onto his seat next to the pilot. His pelvis had been crushed by a heavy piece of metal.

Philippine Tatler editor in chief Anton San Diego got out of  the chopper to help the other passengers. King’s wife, Angeles “Lingling” King, was in a panic over her husband. Bag designer Celestina “Tina” Ocampo helped her husband, Ricardo “Ricco” Ocampo, out of his seat.

Anton and Tina walked down the mountain to seek help while Ricco stayed behind with the other injured passengers, businessman Christopher Chilip and his wife, Patricia.

It took Anton and Tina 45 minutes negotiating the rough mountain trail before they reached  town.

Meanwhile, villagers reached the crash site in 15 minutes. An injured Ricco was assisted by one of the villagers, Tito Vidal.

“What struck me was their willingness to help and to risk their own lives for us,” recalls Anton in a recent interview with Inquirer Lifestyle. “We heard people shouting after the crash. To get to the site, one had to go through thick vegetation, which was about a 40-minute trek uphill.”

On their way down, Tina and Anton met a fragile woman, who must have been in her 70s. She was Arcadia “Manang Cading” Palma, who, with her son, Roderick, helped Tina and Anton limp down the mountain.

The townspeople looked for vehicles to bring the victims to the Martin Marasigan Memorial Hospital.

In the emergency room,  Tina had an X-ray. That was when she and the other passengers discovered that the  hospital lacked equipment. For instance, Archie was brought down on a wood plank instead of a stretcher. He later died from internal bleeding.

The other survivors were brought to St. Luke’s Medical Center in Bonifacio Global City. Their good friend, Menchu Katigbak, rang up trauma doctors and other specialists to look after them.

While the rest were confined for medical examinations, surgery and recovery, Lingling, wearing an arm brace, went to her husband’s wake at Santuario de San Antonio, Makati.

Among the survivors, only Anton came out unscathed, although he was traumatized.

Tina would have nightmares, haunted by the pained voice of Lingling calling out to her husband.

“This was a double whammy for Lingling. She sustained fractures and lost her loved one. She had been through a lot with Archie. In Germany, some time back, he had a massive heart attack, then sepsis and was in a coma. She stayed with him there for months,” says Tina.

Tina’s recurring nightmare brought back the whirring sounds of the helicopter’s engine and the terror of plummeting to the mountain. She would scream and, still in her sleep, would hit her husband. Then Ricco would wake her up.

Three weeks after the crash, barely recovered, the group returned to Cuenca to thank the townspeople  for their kindness and generosity.

“Our group included Wyden and his wife Antonia,” says Anton. “They were instrumental in contacting the mayor and town officials who gathered the names of the rescuers and the other people who helped out. Wyden, luckily as it were, had business dealings in Cuenca and knew the town officials. We organized a lunch and distributed goods, cash, books and clothes to everyone who helped. It was very moving as we went up the crash site and said our prayers on top of the mountain,”

To Lingling,  revisiting the site would be too painful to bear.

Last July, Wyden sponsored a Mass and a meal to mark the first anniversary of the crash. The survivors now prefer to commemorate the fateful day as their new birth day.

Anton asked friends to donate, in cash or in kind, to the townsfolk. Some gave more equipment to Martin Marsaigan Memorial Hospital.

“We survivors have decided to return every year to commemorate this life-altering event. This Christmas, we are planning to host a lunch for them and distribute gifts,” says Anton.

Anton is getting more and more into charity work. “The Philippine Tatler has made philanthropic pursuits its top priority,” he says. “The annual Tatler Ball raises millions for different charities. This year, all proceeds were given to advanced-stage cancer patients.

“On a personal note, it is enriching and inspiring to hear how people help others out in  big and small ways. You realize that by giving back, you not only help others, but help yourself as well. Being a giver is one of the ways to reach fulfillment in life.”

After the accident, Tina   asked Roderick, who didn’t have a job, to work as gardener in the Ocampo home. Although she offered to help his mother, Manang Cading preferred to stay in Batangas.

“The incident was an opportunity to teach my children the true meaning of thanksgiving,” says Tina. “My children were faced with the possibility of losing their parents.

“The experience taught them to love each other more. It taught them to be kind, helpful and respectful to people they encounter daily and even to strangers.

“The people of Cuenca, who were total strangers to us, are the better people. They were the first to give of themselves and showed courage in the face of adversity.”

Tina adds that giving back is a natural instinct of reciprocating the spontaneous kindness of the people of Cuenca.

Patricia is touched by the villagers’ pure intentions. “The help came really quick. What’s more, they never asked for anything in return. They were our angels of grace. Because of their kindness, we couldn’t help but give back. They were an example to us of how to help—fast, no expectations, and then they disappeared. I believe that charity is about being immediate, quiet and discreet. The world doesn’t need to know.” —CONTRIBUTED