Our ancestral house in Maragondon–where, in the ‘sala de visita,’ Bonifacio was put on trial | Lifestyle.INQ ❮ ❯ 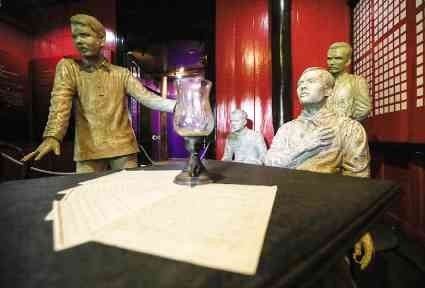 Our ancestral house in Maragondon–where, in the ‘sala de visita,’ Bonifacio was put on trial

Unlike many families who lost their ancestral homes through the vicissitudes of war, family disputes and time’s ravages, the descendants of Roderico Reyes and Juana Viray of Maragondon, Cavite, have had the good fortune of having theirs preserved as a building of historical significance.

It is not clear to this very day why Don Roderico lent his house for this event, and no family records have survived, which may have given the reasons for this, except that he was a Caviteño and thereby sympathetic to Gen. Emilio Aguinaldo and the cause of the Revolution.

Don Roderico, however, vacated the house for his mountain retreat and was, therefore, absent in the trial which took place in his abode.

Maragondon was a crucible in the Revolution, with the Riego de Dios family providing two family members (Emiliano and Mariano) as generals and one colonel (Vicente) in Aguinaldo’s army, schoolteachers like Sulpicio Antony joining other educated elites in active support, and finally members of the principalia establishing a robust branch of the Iglesia Independiente Filipina within the town itself.

Having played its minor although important role in the Revolution, Maragondon eventually went back to its usual slumber, sidestepped by the urbanization that swept the towns closest to Manila like Imus and Dasmariñas.

It became a town lost in time, with a splendid parish church established by the Jesuits in the 17th century, a plaza surrounded by the houses of once great families such as the Somozas, and, scattered throughout the town, bahay-na- bato or manses whose families were active in the Revolution such as the Riego de Dioses, Rillos and the Pobletes.

Other names associated with Maragondon testify to the fact that it must have been a boom town once, due to the enterprise of mestizo sangleys such as the Gancaycos, Cuajungcos and the Angeleses.

When I was growing up, our branch of the Reyes family had already moved, first to Nasugbu and Tuy, Batangas, and then finally to Manila. The house was familiar to us only as a place of visitation during summer vacations.

By then, it was a house owned by the Reyes Villafranca branch, which had inherited it.  But we were also received with the highest courtesy by the three remaining siblings of that branch, who included Lola Choleng and Tio Rey.

The house still had an air of regal splendor since the family furniture was still there, including the butterfly chair (mariposa) where Bonifacio was alleged to have sat as he was being tried; various Thonet pieces and chinoiserie, some family portraits and proper four-poster beds in the two chambers which adjoined the main living room.

I later learned that there had been vitrinas with exquisite ivory-headed saints as well as an Asuncion painting of the Blessed Virgin.

There had also been a magnificent carroza stored in the granary on the ground floor. I surmise these pieces were slowly sold off to meet the family’s economic needs as time went on.

Behind the house was an azotea, with dark stains that were rumored to have been splashes of blood from Bonifacio himself, whose neck had been slashed in Naic before he was brought with Procopio to Maragondon for the trial.

There was also an outhouse with a bridge stretching from the kitchen of the main house.  Again, it was rumored that it was where Bonifacio had, cruelly, been kept prisoner.

A Filipino-French artist who visited the house stated she had felt chills upon entering it, and that its dark past made itself instantly felt for those with psychic leanings.

For us children, it represented no more than a family vacation to the house where our father had partly grown up.

An interesting detail was the door where our father had reportedly run into as a child while playing, causing the tiny scar in the middle of his forehead.

Although we did not know it then, the Maragondon house played a role in both our private and national histories. For me, it may have been the inspiration and the beginning of a lifelong fascination with old buildings and ancestral homes, and the conviction that we need historical preservation in our country.

In 1994, on a visit organized by Jaime Laya, Ramon Villegas wrote in this paper that “the Reyes family has decided to sell the property, but would prefer that its new owners preserve the house and turn it into a museum.”

That exactly was what fortunately happened with the Reyes ancestral home. It was eventually purchased by an enlightened member of the town, Jose Angeles, who generously signed an agreement with the National Historical Institute to turn it into a museum open to the public.

In time for the centennial, then President Joseph Estrada gave a grant for the house to be repaired and refurbished as part of our national history. In the former living room is a tableau of the Bonifacio trial with 3D figures representing the members of this tragic event.

Events are held in the former granary; indeed, I once met former Prime Minister Cesar Virata (a lateral descendant of President Aguinaldo) in a conference organized by the Cavite Historical Society held in the Maragondon house.

The mariposa chair now reposes in the Forbes Park home of one of my cousins; it was once lent to Manila City Hall for a Bonifacio exhibit. I am the owner of a rosewood four-poster trundle bed which we believe is the childhood bed of my grandfather, Tomas Reyes.

And the Asuncion painting of the Blessed Virgin is the proud possession of an aunt who is also an antiques dealer. Sic transit gloria.

The historical plaque by the front door of our ancestral home, issued by the then National Historical Institute in 1948, states: “Where Bonifacio was Court-Martialled. In this house, erected in 1889, by its owner Teodorico Reyes, Bonifacio, founder of the Katipunan, was tried with his brother Procopio, May 1897, by a court martial headed by Brigadier General Mariano Noriel. He was shot, May 10, 1897 at Mount Buntis.”

The plaque errs only in the name of the owner, who was Roderico Reyes, married to Juana Viray.

The trial took place not in a courtroom with the townsmen as witnesses, but privately in the sala de visita. Family history relates that Bonifacio sat in a Vienna-style love chair as he faced his judges, who included General Mariano Noriel as president of the Council of War.

The issue was whether or not Bonifacio, through his words and actions, had committed treason against the government, at that time represented by Gen. Emilio Aguinaldo who had just been elected president in Tejeros.

The trial ran from May 4 to 6. The shortness of the trial, the paucity of witnesses and the haste with which judgment was rendered were all remarkable.

Despite their desperate situation, the two Bonifacios were still able to provide measured testimony in their own defense.  The Supremo’s wounds in the neck and larynx apparently did not hinder his speech.

Gregoria de Jesus’ deposition must surely count as one of the most admirable made by the wife of a doomed husband. Included in the testimony of Andres Bonifacio was a complaint about the attempt by the arresting officer, Agapito Bonzon, to “stain the honor” of his wife.

Details of this dastardly act are recorded in various accounts. They allegedly bound her to a tree to coerce her into saying where the Katipunan funds were kept. Upon her denial of any such trove, they deprived her of her revolver, twelve pesos that she had on her and an inexpensive engagement ring of low-karat gold. Colonel Bonzon then took her to an unoccupied house, where she was sexually abused.

Despite this terrible ordeal, her focus was still on her wounded husband and the desperate attempt to defend him in what was, in effect, a kangaroo court. The two brothers were adjudged guilty of “attempting  to overthrow the government and kill the President” as well as “resisting the government armed forces.”

It is interesting to note that General Riego de Dios and Crisostomo Riel, both natives of Maragondon, refused to sign the final court judgment.

On May 8, the trial results with a recommendation for the death penalty were forwarded to President Aguinaldo, who was thick in the defense of Maragondon, which was now, too, under siege.

The sentence was commuted to banishment by Aguinaldo. He was, however, persuaded by Generals Mariano Noriel and Pio del Pilar to order the original sentence to be carried out.

On the early morning of May 10, Andres and Procopio Bonifacio were led away to Mount Buntis to be executed by a troop led by Major Lazaro Makapagal.

Maragondon fell soon after to the Spanish. General Aguinaldo was obliged to transfer his troops to Biak-na-Bato, where a truce with the Spanish was brokered by Pedro Paterno, leading to temporary exile in Hong Kong. The Revolution was to lose its momentum and, some say, its integrity at this stage.

Interest in issues of the first Philippine Revolution has been resurrected in such movies as “Heneral Luna.” The events of Naic, Maragondon and Mount Buntis may have foreshadowed that later phase of the Revolution, unveiling a dark side which now emerges from such venues as the Bonifacio Trial House in my ancestors’ hometown.

The relatively modest house in Maragondon continues to cast a long shadow in our troubled history. —CONTRIBUTED

The author is the great-great grandson of Roderico Reyes and Juana Viray.