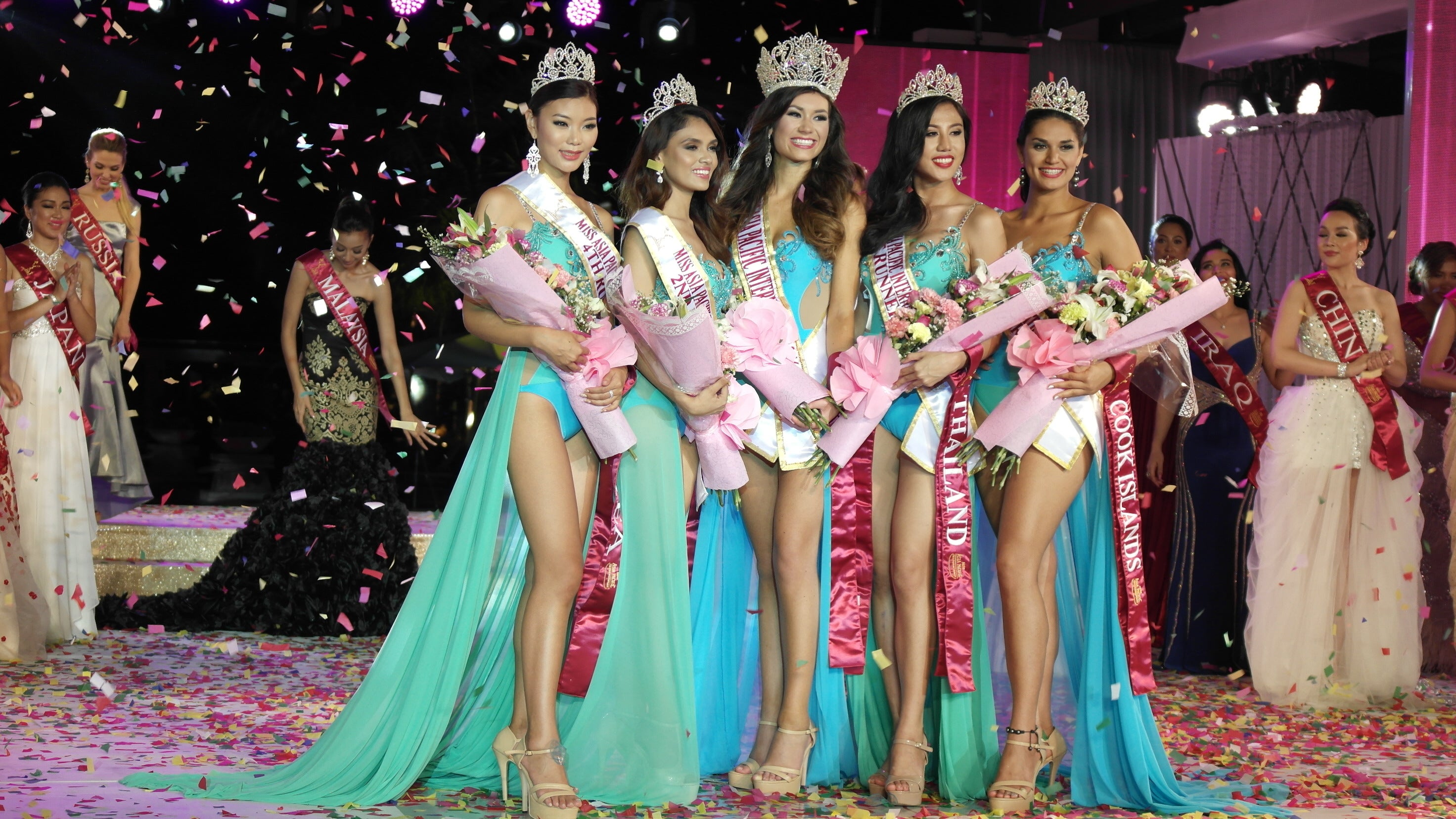 PUERTO PRINCESA CITY—There is no exact science to the perfect formula that makes for an ideal beauty queen. But having outstanding physical attributes, impeccable communication skills and a charming personality are a good start.

It also helps to have unusual skills, like being a trampoline gymnast and a communication adviser, as was the case with Tessa Helena Le Conge of the Netherlands who clinched the Miss Asia Pacific International crown in this city on Wednesday night.

Taking on the trampoline for two hours three times a week has molded her physique, Le Conge said, while her day job has honed her presentation skills.  Being Indonesian-Dutch also exposed her to two different cultures  that helped her develop a unique approach to interpersonal affairs.

Despite such an edge, she “really did not expect (to win),” said Le Conge,  who bested 39 other aspirants at the pageant finals staged at the Sheridan Beach Resort and Spa, located just 15 minutes from the Puerto Princesa Underground River, one of the seven new “natural wonders of the world.”

Le Conge, 22, had earlier won the Miss Bikini of the Netherlands pageant, and Miss Cinex, a festival contest.

Unlike the recent Miss Earth pageant, also staged in the Philippines where the winner reaped some harsh words from the host delegate, the new beauty queen earned only plaudits from the other contestants who voted her Miss Friendship.

“They’re so nice. I’m so happy they think I’m friendly,” said Le Conge, whose views on the contest’s advocacy—“beauty in diversity”—attested to her fine character.

Asked by Miss Malaysia during the Top 10 question round whether she thought of herself as outstanding, Le Conge replied:  “I think all these girls are pretty in their own way, because we’re all different … And I respect (that) totally. So I think every girl in this pageant stands out in her own way.”

Miss Asia Pacific International President Jacqueline Tan-Sainz expressed excitement at the successful restaging of the oldest international pageant based in Asia. The global tilt was last held in China in 2005.  Tan-Sainz’s  family acquired the competition in 2011, along with the Mutya ng Pilipinas search.

Along with the opportunity to travel around the Philippines and different parts of the globe, Le Conge also earned $10,000 with her new title.

In the meantime, she would have to put her trampoline aside.  As part of the Dutch national trampoline team, Le Conge missed a recent competition because of the beauty pageant.  She would also have to skip the next contest in December because of her responsibilities as a new beauty queen.

“The next (trampoline) competition will be in May or June next year,” Le Conge said, adding that she’d also go back to her job at Jive Communication.  “The work is very diverse, because sometimes we advise the government. We also do websites and marketing for companies.”

Host delegate Ganiel Akrisha Krishnan, Mutya ng Pilipinas, finished third in the competition.  Asked which famous person she would like to meet, the 22-year-old Far Eastern University student and sportscaster for ABS-CBN’s S+A channel, replied: “I would badly want to meet the newly elected president of the United States, Donald Trump. I think he is one of the most powerful persons right now. Being able to talk to him would make me be of more influence to others because I would be able to tell him what my advocacy is.”

First runner-up was Chawanya Thanomwong of Thailand, who was also named Best in Swimsuit. Miss Photogenic and Best in Talent Felicia George of Cook Islands was third runner-up. Rounding up the Top 5 was fourth runner-up Soyeon Kim of Korea, who was also proclaimed Miss Sheridan Beach Resort and Spa.

The pageant, which had as its media partner the Philippine Daily Inquirer, will have a delayed telecast on cable channel Star World on Dec. 4.