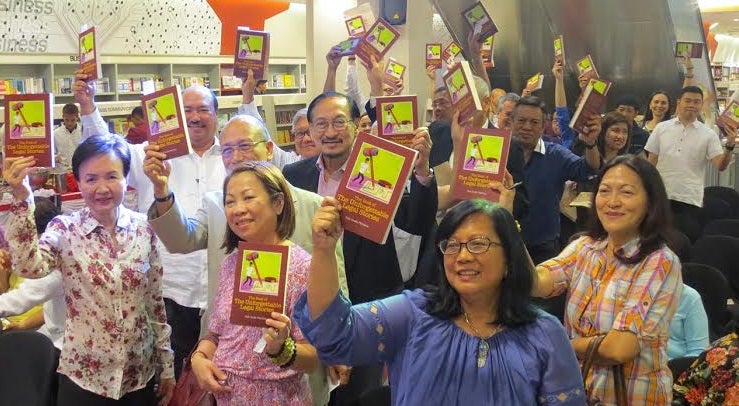 Aida Sevilla-Mendoza (left) with well wishers at her book launch

This long-running series was first published in book form in 1975, followed by two volumes in 1978 and 1980s. More than a 100 stories have been written. Now author Aida Sevilla-Mendoza has compiled five classic and five new legal stories into this volume, “The Best of the Unforgettable Legal Stories,” which has a foreword by former Supreme Court Justice Adolfo Azcuna and published by Anvil Publishing.

The author’s style is straightforward, without embellishments, and concise. She just lets the facts speak for themselves and the reader is immediately hooked, in the way good or great short story writers (Chekhov comes to mind) manage to do.

The dialogue may be described as “creative nonfiction,” and the 10 stories were selected in consultation with friends and experts.

“The Woman Who Has Two Husbands” is about Benita (all the names, except those of the judges and lawyers, have been changed) who falls for the charming rake Diego. They marry, have a child, Teddy, and live happily for a time.

Then Mateo disappears; it turns out he has run afoul of the law. Benita leaves for a job in Manila, meets Philip, a kindhearted Chinese owner of a biscuit factory and becomes his common-law wife. She is unaware that he has a family in Hong Kong. And Mateo, who had been in jail for armed robbery, reappears, demands custody of Teddy, and sues Benita for adultery. That is how the case lands in court.

“The Antero Inheritance Case” involves a situation not uncommon among the well-off: a legal battle over money, over what the antagonists feel is due them. Don Filemon, a wealthy and elderly widower, marries a younger woman beneath his station, Lita, a mere high school graduate who does not belong among las buenas familias. This raises a red flag among Filemon’s grown children. The father begets more children, virile despite his age, and this makes the children from his first wife even more concerned.

Rumors of infidelity on the part of the second wife float, and the children succeed in having her stepmother disinherited. Upon her husband’s death, Lita learns this and she prepares for battle. “It’s complicated,” observed the lawyer handling the case, then Sen. Ambrosio Padilla.

“The Case of the Battered Child” is still among the well-to-do of an earlier era. A daughter, an heiress-to-be abandoned by her mother and brought up by a cruel grandmother, takes it out on a daughter who reminds her of her husband who divorced her.

What is noteworthy about these classic legal stories is that the dramatis personae were socially prominent and wealthy, often defended by celebrity lawyers like then Sen. Salvador Laurel.

Many of the stories were written many years ago at a time when there was no Facebook, cell phones or e-mail. But they remain absorbing reading because the situations and emotions depicted are timeless, and reflect the human condition. —CONTRIBUTED