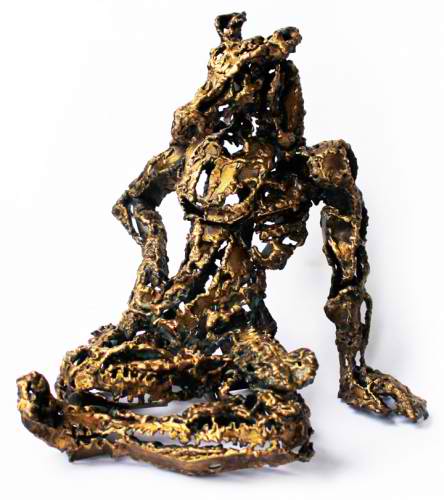 For its Kingly Treasures December auction, León Gallery has rounded up a sizeable collection of contemporary works by the foremost young artists of today.

An important piece is Rodel Tapaya’s 2007 acrylic-on-burlap “Adyos,” which displays a heavily detailed brooding subject and dissonant colors. It has a starting bid of P300,000.

Undoubtedly one of the preeminent artists of his generation, Buen Calubayan has two paintings on sale. His oil-on-canvas “Fressie Capulong”—a portrait of a woman who appears to be on the verge of a breakdown—is being auctioned off starting at P600,000.

Poklong Anading’s 2007 cement-on-board “Drawing Straight Circle” No.4, defined by a whirlpool of saturated gray, has a starting bid of P100,000.

Another sought-after piece is Andres Barrioquinto’s 2016 oil-on-canvas “Silent Air,” which features a pale woman with a head full of butterflies. Bidding starts at P1.4 million.

Also a significant piece is Ronald Ventura’s untitled oil-on-canvas painting, which shows a human head with the image of a horse on top of it. Initial bidding is P600,000.

Leon Gallery has been recently named by the prestigious listing Blouin Art as one of the top 250 auction houses in the world.

“Our aim to get the very best results for our partners and clients has been fully credited   especially having sold the highest for a single lot at auction in the Philippines,” Ponce de León said. “I take this recognition in behalf of Team León, and we send our sincere thanks to our clients and consignors for their full confidence with us.” —CONTRIBUTED