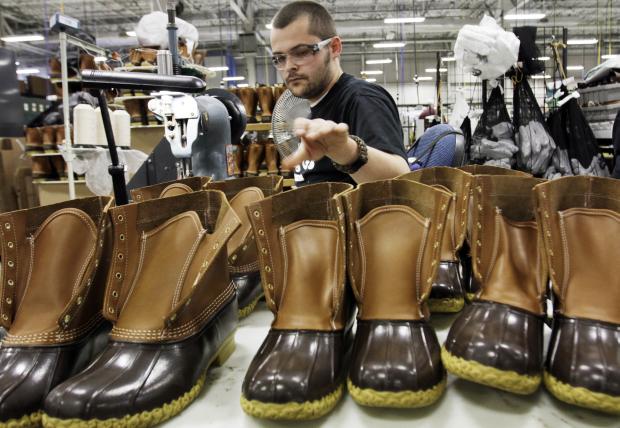 In this Dec. 14, 2011, file photo, Eric Rego stitches boots in the facility where LL Bean boots are assembled in Brunswick, Maine. L.L. Bean is kicking it up a notch as demand continues to surge for its iconic boot. The Maine-based outdoors retailer has leased a 110,000-square-foot building and plans to install a third injection-molding machine. The company is boosting production to meet demand that’s expected to reach one million pairs in 2018. –PAT WELLENBACH/AP

LEWISTON, Maine — L.L. Bean is kicking it up a notch as demand continues to surge for its iconic boot.

The Maine-based outdoors retailer has leased a larger, 110,000-square-foot building and plans to install a third injection-molding machine to manufacture the rubber soles. It’s also hiring 100 more workers in the new year to make the boots.

A combination of form, function and nostalgia is behind the demand, said Willie Lambert, Bean’s merchandising manager for footwear.

“It’d kind of like everything old is new again,” Lambert said. “They’re gravitating to the past and anchoring themselves into it.”

The original leather-and-rubber “hunting shoe” was designed by Leon Leonwood Bean 104 years ago. The formula hasn’t changed — they’re still handmade in Maine — but Bean might roll over in his grave over some of the colors offered these days.

There have been red, blue, white — even purple — versions in recent years. And the new manufacturing capacity that will come online in the new year will provide greater flexibility to provide funky colors, said Donna Berube, production facility manager.

The success is rolled up in a retro trend that strikes a chord both with baby boomers and younger consumers who missed out on phonographs and tape recorders.

The Urban Outfitters store in Manhattan currently has record players, old-school vinyl albums and tape decks in the front window this holiday season, Lambert noted. Doc Martens, Levi’s jeans and Stanley thermoses are all items that have benefited from the trend.

Currently, some of the hottest-selling shoes are Adidas Stan Smith and Superstar sneakers, designs that saw their heyday 40 years ago, said Dan Hess, CEO of Merchant Forecast, an independent research company.

But retailers like L.L. Bean should take a measured approach to growth, because it’s likely double-digit sales growth cannot be sustained over the long haul.

“There can be times when true classics become trendy,” Hess said from New York. “Teenage girls in Malibu are not always going to be wearing L.L. Bean boots, but they are right now.”

When it comes to footwear, other brands have enjoyed a meteoric rise only to fade, including recent examples like Vibram’s FiveFingers and Crocs.

The “Made in the USA” label affixed to the boots is rare in footwear. Well-known Maine brands like G.H. Bass, Cole Haan, Sebago and Dexter are now made abroad.

Bean is committed to making the boots in Maine at production plants in Lewiston and Brunswick. The new building will double the size of the operation in Lewiston; the new molding machine — the third — will be installed this summer at a cost of $1 million.

Lambert joked that the company needs to be careful what it wishes for with expanded production.

He said that past shortages and backlogs have only added to the hype surrounding the boots. “People always want what they can’t have,” Lambert said. –David Sharp/AP