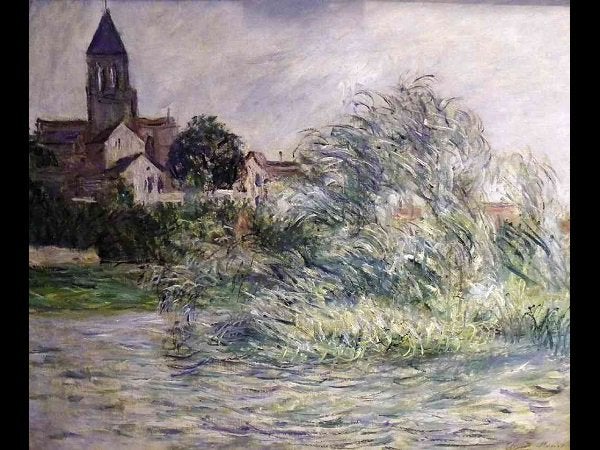 STOLEN, SOLD Claude Monet’s “L’ Eglise de Vetheuil,” shown here in a photo supplied by the Manhattan District Attorney’s Office in New York, was sold for $32 million by former Imelda Marcos’ social secretary, Vilma Bautista. The buyer said he bought the stolen artwork “in good faith” and has agreed to a $10-million settlement with the counsel of martial law victims. Photo taken from PCGG website, pccg.gov.ph

Who deserves millions in art seized from Marcoses?

NEW YORK—A multimillion-dollar trove of seized Impressionist art believed to have been owned by the regime of Philippine dictator Ferdinand Marcos has sat for five years in a climate-controlled Brooklyn warehouse, the subject of a bitter legal fight.

At issue is whether the 50 artworks—which include an 1881 painting by Claude Monet—should go to thousands of victims of the late dictator, to the current Philippine government or to the personal secretary of Imelda Marcos, who contends she was rightfully given some of the art as gifts.

“It’s a question of who is the owner and who is entitled,” said Robert Swift, a human rights attorney representing nearly 10,000 victims of the Marcos regime who in 2011 won a judgment against the late dictator, his estate and his wife, Imelda.

Of particular interest in the long-running, multijurisdictional case is an 1899 Monet from the “Water Lilies” series called “Le Bassin aux Nymphéas,” that Imelda Marcos’ secretary, Vilma Bautista, sold in 2010 for $32 million.

The Presidential Commission on Good Government (PCGG), a state agency established following the 1986 Edsa People Power Revolution to recover billions of dollars in assets believed to have been amassed during Marcos’ 14-year regime, has argued that the artworks belong to the Philippine government.

Swift, on the other hand, has insisted that the Marcos victims are entitled to the paintings.

“My client has nothing against the human rights victims,” said Casey Murphy, the American lawyer representing the PCGG.

“Our point is, if these were paintings accumulated through misappropriated funds, they should go to all Filipinos and not just one class of people and their lawyers,” Murphy added.

And then there’s Bautista, who kept $28 million when she sold the water lily painting to a Panamanian corporation controlled by a London-based art gallery.

That gallery then sold the painting to a British hedge fund manager in Switzerland for $43 million, according to court papers.

The hedge fund manager has paid $10 million to Swift’s clients. Even so, the Philippine government has sought to recover the painting.

New York City prosecutors had charged Bautista with failing to disclose the sale in her 2010 tax returns, and she was convicted after a five-week trial in 2013 of conspiracy, tax fraud and other charges. About $15 million of her funds were frozen by the courts.

A lawyer for Bautista, who is now 78 and free while appealing her conviction, hasn’t returned a message seeking comment.

At the time, Bautista’s lawyers argued their client had the right to sell the Monet painting, which was owned by Imelda Marcos. The other paintings were given to her as gifts or obtained on her own, her lawyers have argued.

Up to Manhattan judge

Ultimately, it will be up to a Manhattan federal judge to sort it all out.

In the meantime, the PCGG has established a website to solicit tips as to the location of hundreds of paintings and jewelry that Imelda Marcos, now 87 and a congresswoman in the Philippines, and her family allegedly obtained with state funds.

Representatives for Imelda Marcos said the congresswoman had no comment on the art.

Murphy said he hoped the judge would agree with the PCGG’s position that since Imelda Marcos ultimately obtained the paintings improperly, she was never a rightful owner.

“In the main, the argument is a thief never gets good title to property,” he said. TVJ