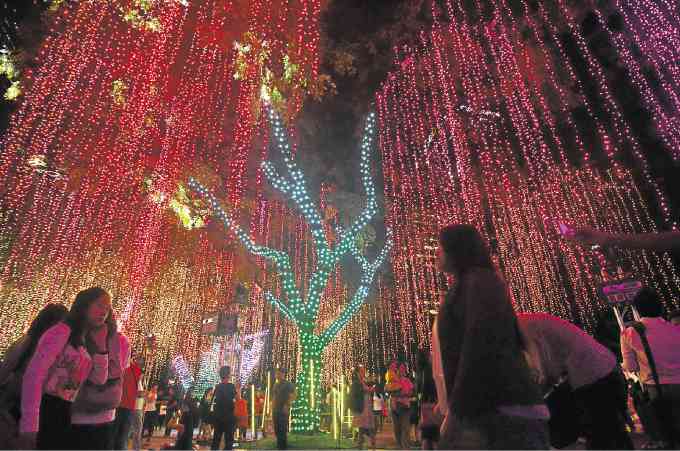 The most anticipated Festival of Lights at Ayala Triangle Gardens in Makati, which kicked off Nov. 15, marks the beginning of Christmas cheer in the bustling city. It’s now on its eighth year.

With a million lights illuminating the façade of Ayala Triangle Gardens at night, nothing comes closer to capturing the magical holiday spirit. The spectacle even made it to Conde Naste Traveller’s Seven Most Spectacular Light Shows in the World, on par with Paris’ Champs-Élysées, Copenhagen’s Tivoli Gardens and Japan’s Kobe Luminarie.

“It’s very hard to top the show year after year. It drains your creative juices, that’s why last year I sought out a partner to help me design the lights,” said award-winning director Voltaire de Jesus, who has been directing the lights show since it started in 2009.

Last year, Luther Gumia joined him in conceptualizing and executing the light design. The musical score is once again arranged by musician-composers Jazz Nicolas and Mikey Amistoso of Watusi Manila.

Like in previous years, there will be three medleys, each showcasing dancing lights to the theme’s different tunes: Christmas Fiesta, inspired by the sounds of Rio de Janeiro; Period Films, a musical feat that ends with a crescendo worthy of a Hollywood flick; and Disney, a magical show with laser lights mimicking the famous Northern Lights in Scandinavia.

“We have lights here made specifically for the show. This year we have field lights for the first time. If you stand at the center of the entire setup, you will be transported into this surreal, magical land,” De Jesus said.

There will also be Thanksgiving Masses from Dec. 15-23 at the fountain area of the Ayala Triangle Gardens.

This year, Ayala lights and sounds will also be lighting up Nuvali, Bonifacio Global City, Centrio in Cagayan de Oro and Ayala Center Cebu. The tallest Christmas tree, a 56-ft-tall installation, will be constructed at Circuit Makati.

“We’ve prepared yet another magnificent show that will definitely lighten everyone’s hearts, bringing families, friends and the whole community together and reminding them of the joys of Christmas,” said Shiella Aguilar, project development manager for Makati.