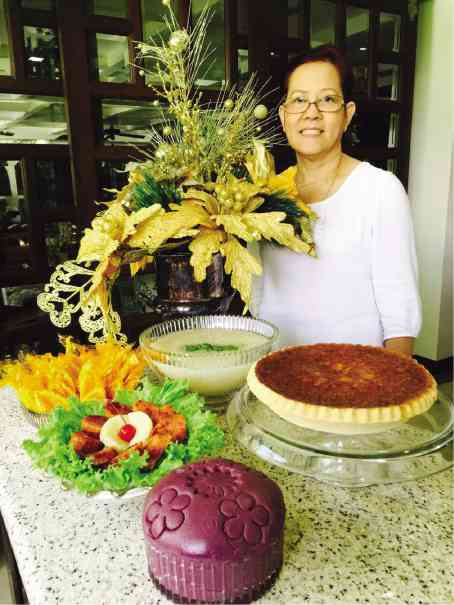 Precelina Liwag Herrera’s culinary repertoire consists of timeless dishes prepared the way mothers and grandmothers did in the olden days.

Growing up, she was always by her mother Flora’s side.

Flora was the cook and seamstress of Natalia Dumlao, the wife of Patricio Sr., then governor of Nueva Vizcaya.

From Flora, Precelina learned the fundamentals of cooking. At age 10, Precelina already had a specialty, mongo.

She also ventured into the food business early on. Giggling, she recounted how she would make yema and pass it around to her classmates who bought it for P2 a piece or P5 for three pieces.

She considers her ability to recreate a dish, just from tasting it, as her greatest gift.

She is guided by her collection of cookbooks and magazines. She does not follow the recipes, but instead takes inspiration from them, rendering the dishes by feel, so to speak.

In 1988, she started her kakanin business.

Lonely after her husband, Marlu, went to work in the Middle East, she wanted to turn a new page and to express herself through food.

Slowly she expanded her products to include packed lunches and snacks she delivered to banks and other offices.

As her reputation of being a good cook grew, her catering business prospered.

A good entrepreneur, she also went into selling jewelry and clothes.

She, however, quickly let go of her other ventures upon realizing that food was her best business interest. She was able to open a bakeshop, a lugawan and panciteria, one after the other.

Since she wanted to do everything herself, her health suffered. This hindered her from pursuing the businesses she established.

Her husband’s prodding to rethink plans for the family; the need to send their children through college led her to work in Saudi Arabia as an English teacher. This didn’t last beyond two years because the kitchen beckoned.

As she did in the Philippines, she made her specialties for the kababayan abroad who craved for and found comfort in good home-cooked meals.

Her life as an overseas worker lasted 18 years. Last June, she came home for good and has gone into farming.

The abundance of wild chilies on her farm inspired her to make her own chili sauce.

Precelina’s Chili Sauce was labeled Kitchen Classics, the brand of her food products.

There seems to be no keeping “Tita Pre,” as she is known to friends and kin, away from the kitchen. Not only did she resume making kakanin, cured breakfast meats, baked bangus and cakes, she was also convinced by a friend, Elda Soteco Corado, to share her culinary knowledge.

At Tita Pre’s age, Elda said she could already teach what she knew.

By doing so, she hopes she can help preserve the Philippines’ rich culinary traditions.

I was fortunate to host her in my kitchen where she made ube—which took four hours of nonstop slow stirring to get the halaya of her desired consistency—and macapuno.

Though simple fare, a well-done ube halaya, I believe, is an exalted food find.

Hers is by far the best I have ever tasted. It is chewy, smooth and silky and tastes like a cross between yema and pastillas. How decadent is that!

The macapuno is equally the best! To think I am not fond of it. Tita Pre’s macapuno is so soft and melts in the mouth.

Her egg pie is old-fashioned as can be; biting into it takes me back to afternoons spent in my lola Luz’s house.

Tita Pre also brought for me what her clients call Poor Man’s Ham—three pieces for P200. It is delicious.

It tastes like a fine hamonado longganisa that is as big as an embutido. It has bits of pineapple, reminiscent of ham. It has chunks of cheese that give it richness while cutting through the sweetness.

It is so delightfully easy to eat, the taste so comforting with rice or hot pan de sal.

Its simple flavors and taste, and the comfort it brings remind me of why I started to cook in the first place—because I saw how food made people happy.

Thank you, Ana Ong, for the ube she gifted me with and for introducing me to Tita Pre.