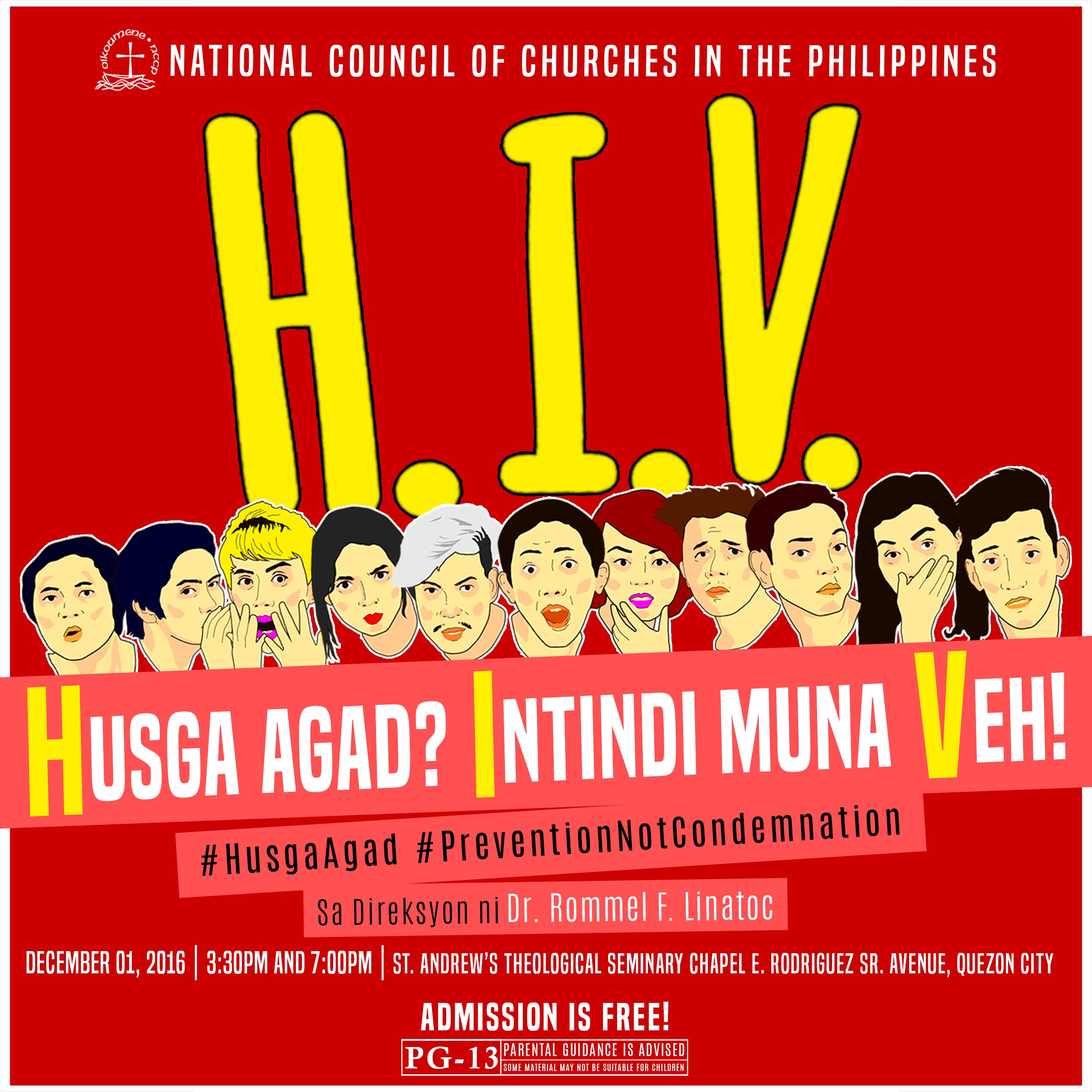 "HIV," which opens today to coincide with World AIDS Day, is offered by the National Council of Churches in the Philippines.

“HIV” is a straightforward title for a play that happens today, World AIDS Day.

The title, short for “#HusgaAgad? Intindi muna Veh!” alludes to the Human Immunodeficiency Virus, which can cause Acquired Immune Deficiency Syndrome.

The play is offered by the National Council of Churches in the Philippines (NCCP), the country’s largest fellowship of Protestant and non-Roman Catholic churches. Directing is Rommel Linatoc of the NCCP’s resident theater company, Teatro Ekyumenikal (TE).

Onstage will be students and young people coming from TE, the HIV Awareness Campaign Group and Philippine Women’s University-Communication Arts.

“Our theatrical commemoration this year explores the unmentionable subjects of sexual practice and embedded cultural practices that lead to new infections,” said Linatoc. It will also touch on the dire state of health care and the negative impact of Church dogma and conservatism.

The play wants to be as true to the experience of people living with HIV (PLHIV) as possible. The seven scenes making up the play are inspired by the stories of PLHIV, written by the cast members themselves following the style of TE.

The cast members “were moved to write theater pieces and to challenge themselves more to animate the issues. They have engaged themselves in a different kind of theater devising that evokes, educates and provokes,” said Linatoc.

“The ensemble also attended a series of seminars and they themselves experienced the testing process,” he added.

As the title suggests, the NCCP production will also discuss the plight of the LGBTI community, among the affected sectors of the rising prevalence of HIV in the country.

It will question the negative attitude toward LGBTI individuals and use the Bible as a weapon to this end, said Linatoc.

The venue is a message on its own. “You will see scenes never before seen inside the sanctuary or inside the church,” Linatoc said. “It is a life itself that questions the existence of life and celebrates love, passion, lust and compassion.”

The HIV/AIDS and Art Registry of the Philippines said 3,112 new HIV cases were diagnosed in July-October, 333 already the AIDS stage. Some 885 were within the 15-25 age range; 11 cases were below the age of 15.

There were 89 recorded deaths in the same period, the report added.

The Department of Health gave a projection that more than 55,000 Filipinos will get infected with HIV this year. There is an average of 26 new reported cases daily.

Even then, the NCCP says PLHIV must be cared for, not condemned, by the churches. To address the increase in cases, it champions HIV education and the normalization of HIV testing in the Philippines.

The play “hopes to lead the audience in challenging the systematic factors that lead to spirals of poverty and abuse. In short, it challenges human beings to be humane,” Linatoc noted.