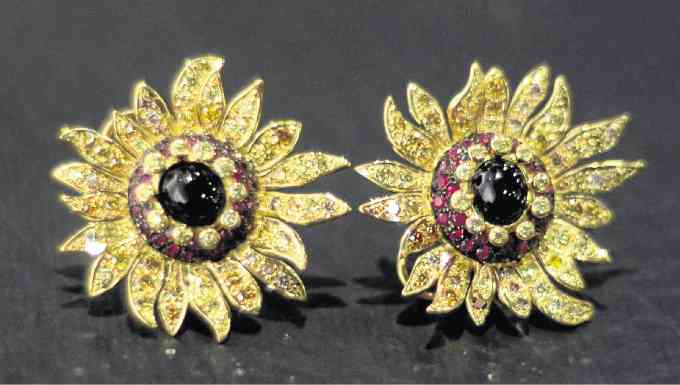 Jeweler Hans Brumann balances the “most beautiful” delicate yellow sapphire on top of his two fingers, envisioning how it would look once set between two smaller diamonds in a gold ring.

“This is more than 18 carats, an emerald cut so well done there is no ‘hole’ in the middle. Usually, there is a ‘hole’ that looks like an eye. This one doesn’t. I have to turn it into a ring because if it becomes a pendant, it would disappear (on a woman’s chest) but as a ring…” he explains, trailing off as he cradled the gem.

Brumann—who is also a sculptor— has been creating one-of-a-kind, take-your-breath-away jewelry for the past 50 years. Long before younger jewelry designers began presenting so-called statement pieces, Brumann had already made rings and hairpins fashioned out of spoons and forks and brooches inspired by sea creatures.

He has also dared make fine jewelry from found objects like kamagong  and crushed seashells, and is among, if not the first, to embrace the beauty of colored stones.

Inspiration can come two ways. Brumann can buy a stone and play around with ideas on how to best showcase its brilliance in a setting of precious metal.

Other times, he picks a random theme and checks out his treasure trove for the right stones to go with it.

Unlike Masters 1, the Masters 2 collection has a lighter and more exuberant aesthetic. Van Gogh’s “Starry, Starry Night” is ambitiously rendered in a pendant using tsavorites and an array of colored diamonds.  (At press time, the piece was still being set in Brumann’s workshop.)

The melting clocks in Dali’s “The Persistence of Time” are translated in matte finish white gold and diamonds.  “The Eye,” also by Dali, is interpreted twice—first as a brooch pendant with a blue sapphire iris and marquise diamond eyelashes, and then as a teary eyed pendant with a blue topaz encasing black onyx as its pupil.

What Brumann does is filter specific details of an artist’s work and turn it into something “interesting and doable.”

He takes a detail from the gown of the female in Klimt’s “The Kiss” and fashions it into a square ring of ivory, kamagong and white diamonds. The curlicues in Klimt’s “The Tree of Life” are turned into a pair of earrings in yellow gold and diamonds.

The hieroglyphs in Klee’s “Triumph of a Degenerate” are white diamonds set in white gold, while Chagall’s bizarre beasts are pendants laden with rubies, blue sapphires, marquise white diamonds and tsavorites.

Brumann sheepishly admits that he did not ask for BenCab’s permission before setting “Sabel” in gold.  “But I sent an invitation. Three months ago I told him I was going to do this (collection). The same with Arturo Luz, we are good friends,” he clarifies.

Brumann says Luz once made copper plate patterns that inspired him to reinterpret as a bracelet.

The pieces inspired by Navarro, however, are the ones most difficult to make. A brooch and a pair of earrings that seem like eyes of storms are rendered in coral, lapis lazuli, malachite and onyx.

“I would love to have one of Navarro’s paintings but they cost millions,” Brumann says.

He maintains a workshop in Makati City where he personally oversees the creation of all his pieces. Most jewelry available in the market now is sourced from China, he reveals.

From Geneva to Manila

This was not the case when Brumann, then a 27-year-old goldsmith and jeweler from Geneva, arrived in Manila in the 1960s. He joined the century-old La Estrella del Norte before its Jewish owners sold the company and left the country.

Brumann was poised to try his luck in Hong Kong, but realized he could continue doing business in Manila since he already enjoyed a loyal clientele.

Besides, Filipino clients admire the workmanship and effort that go into  a piece instead of merely assessing it for the amount of precious metal and stones used, as others are wont to do.

Brumann says the Philippines is not lacking in skilled plateros whose talent and expertise are passed from one generation to the next. However, government does not provide adequate support, and jewelry associations have a tendency to create breakaway factions.

This means Philippine jewelers do not adhere to a definite standard of craftsmanship and appraisal, a reason for foreign markets to hesitate in engaging in more extensive trade in the country.

Also, the country has no formal institute to educate jewelers. “Schools are important if traders are to observe a certain level of quality of workmanship and design,” says Brumann. “Europe has trade schools for masons, chefs and goldsmiths.  This does not apply in the US and they copied that here.”

Still, Brumann, a Filipino citizen since the ’70s, insists he is fairly settled in the country. “I love it here. The clients are nice and the people are nice to work with.”

Does he get attached to his works? “When I sell a piece, I almost cry,” he jokes.

“I have favorites,” he admits. “If it goes to the right person, I am happy because sometimes people buy jewelry only for investment.  No! You choose jewelry out of love.”