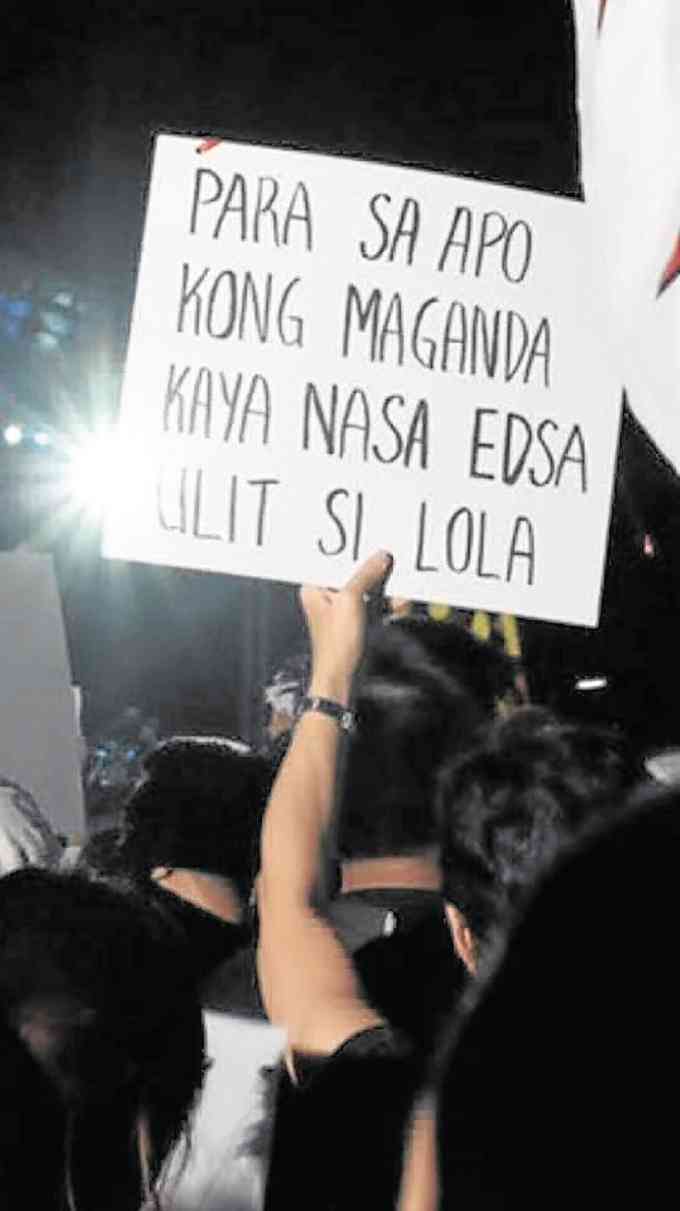 Climbing down the stairs from the MRT Santolan station, we felt good to be “home” at Edsa—30 years after People Power 1.

It was 9 p.m., and I was late for the rally, the third in a series of protests against the sneaky burial of the late dictator Ferdinand Marcos at Libingan ng mga Bayani. Walking briskly past the walls and gates of Camp Aguinaldo gave me a tingling sense of euphoria—almost like the “high” of Feb. 25, 1986.

Although the protest action on Nov. 30 at People Power Monument (PPM) was unlike the original Edsa—different circumstance yet the same adversary—I wasn’t quite prepared for the sights and sounds unfolding a few hundred meters toward White Plains Avenue.

Parked by the sidewalk of Camp Aguinaldo was a long line of cars, whose owners were presumably at the rally. At the end of the line, I saw the biggest factor fueling the energy of this gathering: college kids holding placards and egging motorists to honk their horns in support of their cause.

The motorists indeed agreed to “make busina for hustisya”—as what one placard asked at the first rally on Nov. 18 at the same place—passengers opening their car windows to raise their fists as a gesture of solidarity, a few vehicles having their own rally signs taped on their windshields.

In the rally, students took turns onstage to speak out their minds, demonstrating their grasp of such issues as martial law, dictatorship, historical revisionism and human rights.

But as they denounced with impassioned voices the sins of the Marcos family as well as Mr. Duterte’s, I couldn’t help but notice the peculiar words written on the placards that the kids were waving above their heads.

Aside from the by-now-familiar “Marcos no hero” and the boldly scribbled “Duterte tuta ni Marcos,” many placards displayed the wit, humor and creative imagination of today’s demonstrators.

One of the placards captured the essence of the protest: “Thesis ang ni-rerevise, hindi history.”

As if to dispel their elders’ unflattering perception of today’s youth, the kids who marched from different points in the metropolis in the afternoon of Nov. 30 to converge at PPM and spend hours listening to speeches and live musical performances till after midnight unwittingly proved a point: the spirit of Edsa is alive and kicking—but with loads of millennial flair for fun added to the festive vibe.

Anyare’?: Why millennials are out on the streets–suddenly