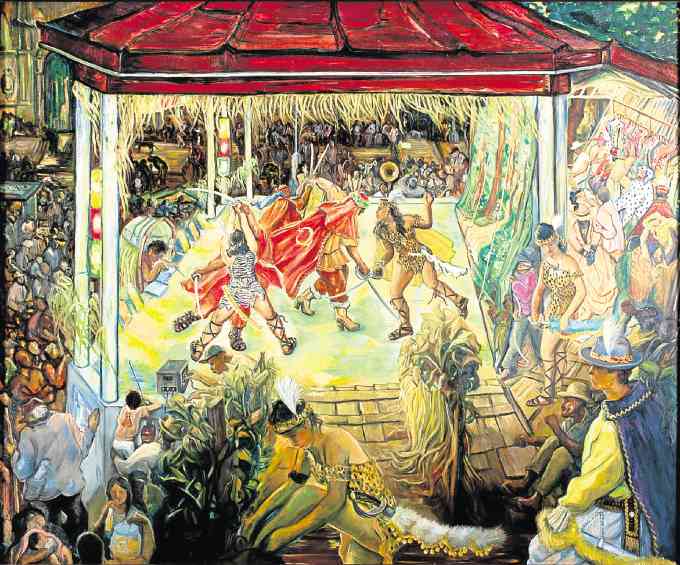 I know Danny Dalena as a realist-impressionist artist, who is finally sharing his invaluable body of works in a retrospective at the third- and fourth-floor galleries of the Cultural Center of the Philippines.

“Last Full Show” runs for three months starting Dec. 10. How the art world has waited a long, long time for this!

It is an exhibit sweeping in scope—covering more than five decades of his artistic journey from the “Jai-Alai” to the “Alibangbang” series, from the “Quiapo” to the “Pakil” series.

A self-effacing man, Dalena is a near-recluse. I see him when he comes out to occasionally head the panel of judges of the Maningning Art Awards.

It’s been a full quarter of a century and more since his last exhibit, also at the CCP, in 1990.

“My father has a great range and vast array of works that shows his exemplary mastery of visual arts,” says filmmaker and UP Film Institute director Sari Dalena Sicat.

He would later make a mark in the early ’70s with his biting editorial cartoons and literary illustrations for the magazines Philippines Free Press and Asia-Philippines Leader, where he worked with the likes of José “Pete” Lacaba, Greg Brillantes and National Artist Nick Joaquin.

One of Dalena’s closest friends, the poet and novelist Erwin E. Castillo, recalls that period: “During the first month of martial law, Danny Boy, Jolico Cuadra and myself were savagely mauled by government agents.”

Of Dalena’s art, Castillo says: “His sensitivity and compassion are crowned by audacious humor, often self-deprecatory.”

Dalena’s series of highly realistic toilet drawings and graffiti were done at that time of turmoil in 1972.

Declares Castillo: “His long, fruitful association with the best writers of our time, Nick Joaquin principally, has given his work a unique and dazzling narrative breadth.”

During the bleakest years of martial law, from 1974 to ’79, when the smallest hint of dissent endangered an artist’s life, Dalena did his “Jai-Alai” series.

Says one of Dalena’s bosom friends, respected Inquirer sports columnist Recah Trinidad: “The great turnaround for Danny came when he won First Prize in the Art Association of the Philippines (AAP/PNB) art contest in 1974 for his painting “Tres-Seis Dejado,” a surreal canvas of lost, lonely bettors in the old Jai Alai fronton on Taft Avenue.”

Trinidad and Dalena go back a long way. They have been allies since college, when Dalena was the resident artist of the Varsitarian, UST’s official student organ.

In 1979, Dalena won another AAP award, Fourth Prize for “Alibangbang.” His series of the same title depicts the popular Cubao beerhouse with the same name, with its night habitués and a-go-go dancers. Dalena caught the place’s sleaze in a humanizing manner.

In 1980, Dalena won the Mobil Art Awards Grand Prize for his “Jai-Alai as Metaphor.” The distinct prize was given for his bevy of works. He bested Ang Kiukok, Jose Joya and Onib Olmedo—who now all belong to the pantheon of Philippine art.

Dalena was doing the “Alibangbang” series when his colleague Lacaba, multi-awarded poet, writer and screenwriter, was released from martial law prison.

Lacaba recalls: “Nasasama ako sa panonood at inuman; but it was only once when I saw him (Dalena) doing the sketches which he later painted.”

Of his art, poet Marra Lanot says: “Danny doesn’t paint according to critical standard or to sell. He paints what he wants to paint. Art talaga.”

Marra and husband Pete are beneficiaries of Dalena’s generosity, too. He gave the couple their portraits which he painted.

Marra’s portrait in oil was done in one sitting, Pete’s was done in several. The two are portrayed in the distinct Dalena way: brutally honest, compassionate, haunting.

Dalena has also done book covers for the couple.

Another friend of Dalena is eminent writer and artist Gilda Cordero-Fernando. She swears by the affectionate Danny. “Magaling magmahal, magaling na magaling magmahal… He is a very passionate person and that’s what made him what he is. He is a person with conviction, right or wrong; and he will stick by them, right or wrong!”

An oil painting of the late Marcelo Fernando, Gilda’s husband, has a pride of place in the home of their daughter Wendy F. Regalado.

The razzle-dazzle of the city gave birth to Dalena’s “Quiapo” series. In it, he shows masses of humanity reaching out to the Black Nazarene. He would go back to his bucolic hometown in his “Pakil” series, in which he shows the famed Virgin of Turumba, the komedya and Pakil customs.

His 1984 painting in the “Pakil” series, “Asong Simbahan,” shows a dog at the center aisle of a church, rolled on its back, its legs splayed open, while church devotees raise their hands in supplication.

“The painting reflected my father’s folk religious piety combined with humor and irreverence, which gave me deep impressions that would carry over to my filmmaking,” Sari says, adding, “I would later make my first short film of the same title, 10 years later.”

Wit, humor, irreverence and depiction of the ordinary are hallmarks of Dalena’s art.

“The Fall of Bataan” is a satirical take on the aging process.

“It is a recent work, reminiscent of his early ones, which shows defeated, slumped figures with spongy lumps and folds of skin,” Sari says.

Her sister Aba, a visual artist herself, concurs: “Dad continues to paint and draw. His ‘Exercise’ series is the most recent, dwelling on the life and struggles of senior citizens, but not without humor.”

Indeed, the upcoming retrospective reveals the magnitude and scope of Danny Dalena’s artistic journey from historical milieu to personal narratives. All because he expresses himself from the heart.

Trinidad’s words are apt: “Dalena paints with the wounded colors of life—blood, earth and rust.” —CONTRIBUTED