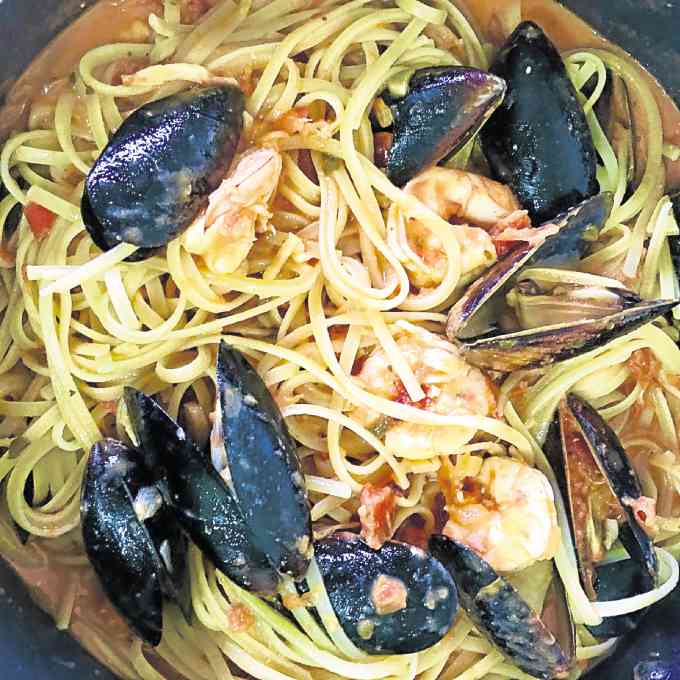 Coat the pasta in the sauce.

When you’re a home cook, the challenge was easy enough: Do a grocery run, and make something “creative” using products from Contadina, the line of Mediterranean cooking essentials, being endorsed by domestic goddess Nigella Lawson.

Then came the caveat: Post what you make on Instagram, with the recipe, where Nigella can see and judge them. Hands-on-eyes emoji here!

So off we went to Robinsons Selection at Venice Piazza in McKinley one early morning, with a large group consisting mostly of bloggers. First stop was the shelf with all the Contadina products.

Contadina, which is Italian for “woman of the fields,” sources its ingredients from only the finest growers all over the world, according to group product manager Justine Ferrer: hojiblanca olives from Andalucia, Spain, for the olive oils; a variety of firm, red tomatoes called Roma from California for the canned tomatoes; durum wheat from Canada for the pastas; and authentic cheese and herbs from Italy, where one family makes the brand’s pasta sauces.

Contadina was started by three Italian immigrant families in the United States in 1914, and is  available in local supermarkets through Del Monte Philippines. TV chef Lawson is its brand ambassador in the Philippines. She visited the country in September when the brand was launched here.

Ferrer sings praises of Lawson, whom they found to be genuinely warm and down-to-earth.

“She asked for authentic Filipino home cooking—nothing fancy—and that’s what we gave her,” the executive says. “We took her to a friend’s home, where the host made for her a couple of versions of adobo, as well as some local desserts. Nigella even went to the Salcedo weekend market.”

We learned she was mad about the local citrus, calamansi.

And that’s what gave this home cook an idea what to make for the challenge: a classic that’s familiar to Nigella, but with something also distinctly Pinoy—calamansi: a seafood pasta with vodka-citrus cream sauce.

In my head, because I’ve never made it before, it’s quick and easy, and would be a real crowd pleaser. Scrummy, as the Brits say.

However, we don’t keep vodka in the house, but I found a 750-ml bottle of calamansi liqueur in the pantry. Problem solved. Then Fiery Seafood Linguine with Calamansi “Vodka” Cream Sauce it is.

I brought the pasta to the office, and guess what? Nobody died. Try it at home.

1 tsp red pepper flakes (add or subtract to taste; I like my sauce fiery)

For the pasta, boil a large pot of water and season generously with salt.

Meanwhile, heat the oil in a big sauce pot over low-medium heat. Sauté the onions until soft. Add the garlic and red pepper flakes and cook for 1 minute.

Add the calamansi liqueur and cook until reduced by half. Add the crushed tomatoes, lemon zest and heavy cream. Season to taste, and simmer up to 5 minutes. Add the seafood and remove from heat after 3 minutes.

Cook the pasta in the boiling water according to package directions. Return the sauce to medium heat and mix the pasta until the noodles are properly coated with the sauce, about a minute. Remove from heat.

(I like to undercook the pasta for at least minute, and finish its cooking time when mixed with the sauce. This keeps it al dente.)

Add the chopped basil. Drizzle with extra-virgin olive oil before serving. Then make yummy sounds and smack your lips like Nigella!

(By the way, if you plan to make stock using the shrimp heads, separate the section where the shrimps’ “walking legs” are attached. Rinse, and then dry them on paper towels. Dredge in 1 tbsp of flour seasoned with salt and pepper—easiest if you put everything in a brown paper bag and shake.

Tap excess flour and deep-fry until golden. It only takes a minute. It’s popcorn on steroids! This is inspired by our favorite dish at the Japanese restaurant in Bonifacio Global City called Chotto Matte.)