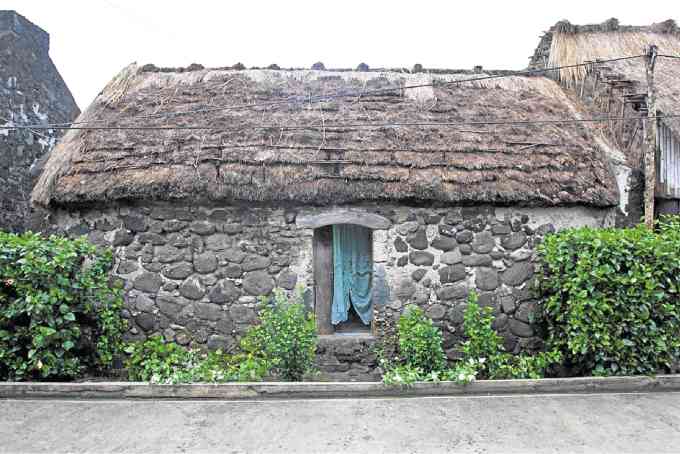 Traditional Ivatan house on Sabtang Island is built and designed to withstand supertyphoons.

This is not a food book,” writes coauthor Marian Pastor Roces in her own separate introduction to “A Delicate Balance: Batanes Food, Ecology and Community,” out this month from Muskkat (Museo ng Kaalamang Katutubo), available online and through Muskkat itself.

She is being playful, of course;’ “A Delicate Balance” is every bit a food book, as the opening notes make clear, although, as it says, it is “a new kind of food book.”

This is at least partially true. Those expecting glamour shots of food and ingredients and recipes easily accessible to the home cook will be disappointed. But the book is a serious and coherent work of food anthropology in the tradition of Jack Goody and Mary Douglas, and is the culmination of two years’ fieldwork in Batanes, tapping all the tools of the trade: oral history, early maps and, as my Ph.D supervisor described it, “structured hanging out.”

The book is structured in a quirky way: as 20 chapters that correspond to 20 everyday words of the Ivatan language that relate to food. Each one explores a theme thoroughly, and sometimes unexpectedly.

The episodic nature of the book’s structure might make it frustrating for a scholar who is hunting for a specific fact; but what is sacrifices in searchability, it more than makes up for in readability. The text hovers somewhere between anthropology and poetry; as well as a knowledge of Batanes foodways, it imparts a deep love for the culture of these islands.

The chapters, divided among Cora Alvina (with whom I shared the stage as a ramp model during a Bench fashion show; despite this dubious addition to her credentials, her knowledge of Philippine culture is unparalleled) and Marian Pastor Roces, are surprisingly accessible, and to the armchair traveler it bathes you in the culture and language and food world of Batanes.

To the itinerant it makes you want to book a flight to Basco immediately before this beautiful, remote, wind-hewn world is sucked into the mundanity of modern life.

But this book will be most interesting to those who know a bit about Batanes, because it will make sense of what you see, of apparently random practices and objects.

Tying everything together are Neal Oshima’s photographs, without which the chapters might languish as an erudite but obscure tome. Batanes and Ivatan culture beg to be photographed, and the camera alternates between sweeping panoramas of the landscape to the minutiae of the material culture and foodways in eye-popping detail.

It would be remiss not to mention that there is an attempt to bring the spirit of the food into the contemporary urban kitchen, with recipes developed by Michael Yap—though you are unlikely to find arayu (flying fish) at your local supermarket.

It might be an unusual recommendation for a stocking-stuffer, but this is an eminently important and pleasurable book that deserves better than to be confined to museums and libraries.