Ricky Gutierrez wants to serve food you don’t have to think about | Lifestyle.INQ ❮ ❯ 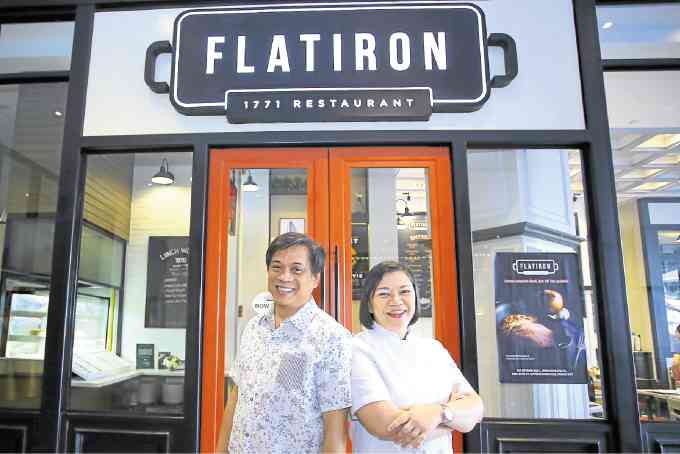 Ricky Gutierrez, CEO of 1771 Group of Restaurants, is a scion of the old Malate families. He built a name for himself as a restaurateur; his flagship establishment, Chateau 1771, is a byword in the upscale dining scene.

His food business started in Malate during the late ’80s in bohemian Manila—then inhabited by a heady mixture of visual artists, theater people, writers, poets, the intelligentsia and other colorful figures. It was in this fertile world of mavericks and game-changers that Chateau 1771 took hold, along with five other restaurants that Gutierrez opened.

Nearly three decades later, they’re still up, and with more branches in Ortigas, Makati and other places in the metro.

“We go where the action is,”  says Gutierrez. “Our restaurants go with the flow and change of the times. We innovate, we evolve and we reinvent our concepts. That’s why we’re still in the business after 28 years.”

He recently added another restaurant to his portfolio with the opening of Flatiron at Uptown Place Mall, Bonifacio Global City (BGC). A brainchild of Gutierrez and his longtime friend and collaborator, chef Vicky Pacheco who has been with the 1771 Group since the ’80s, Flatiron is all about comfort food.

The restaurant’s design is industrial chic, with visual cues taken from New York diners. The restaurant’s name is not derived from the famous Flatiron Building in New York, but from the flatiron griddle used by many diners and restaurants in the United States.

“We wanted to use the name of a cooking tool to name the restaurant, so we decided on the flatiron griddle. It was only after that we realized the allusion to the Flatiron Building in New York,” Pacheco explains.

Each item is good for two persons. The Flatiron Brisket 6 is slow-cooked for six hours in a stew of aromatics, then seared on the flatiron griddle, and finally served with sautéed brown rice and fresh cucumber-carrot slaw.

The Spaghettini Capri is another unique dish—spaghettini tossed in lemon and then fried in butter and garlic slivers, anchovies, oven dried tomatoes  and parmesan cheese.

The Spaghettini Carbonara has whole eggs, cream and a ton of parmesan cheese—comfort food, indeed.

For dessert, there’s the excellent Coffee Pie, a signature item at Chateau 1771. The chocolate-cashew crust with coffee filling is slathered with heavy cream and toffee sauce, then vanilla ice cream is sandwiched between the two pies.

Chateau 1771 will also open at the Philippine Stock Exchange building in BGC, while Sentro 1771 will have another branch in Uptown Place Mall. —CONTRIBUTED