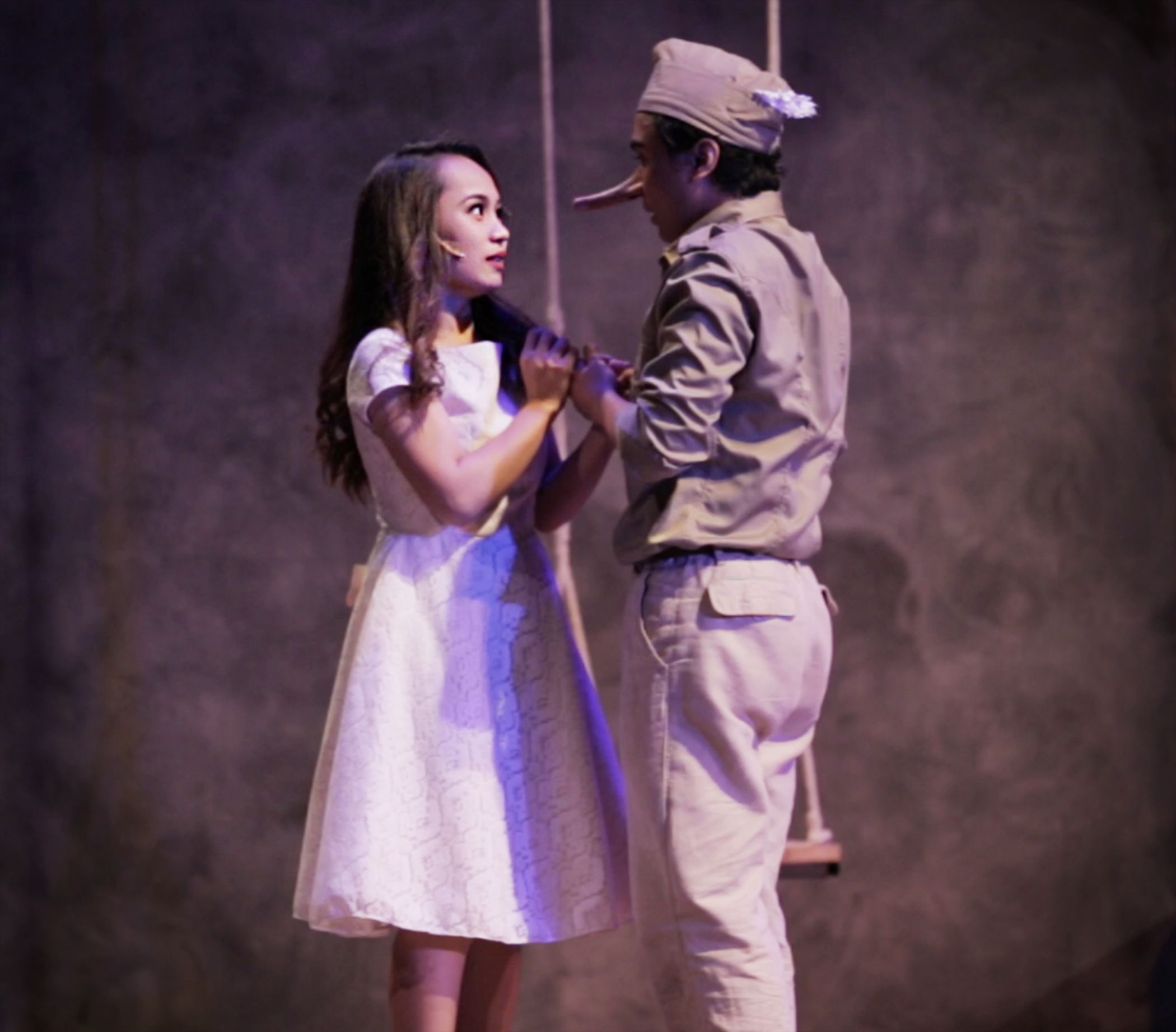 True, it’s but another tale of broken hearts and hankering lovers, but you’d be surprised at how deep this production reaches into you. In its best moments—and that means all clichés considered—it comes off as a meandering poem you simply wouldn’t mind listening to for hours.

Like the original text, Valera’s Filipino translation is also in verse. Moreover, he transposes the story’s 17th-century setting to pre-Second World War Philippines, to a time when sarsuwela and bodabil were staples of the stage.

That transposition is tenable, but the bigger achievement of this production is making its poetic structure sound plain, as if speaking in rhyme were part of natural pedestrian life. That authenticity is best captured by the first-rate turns of Nicco Manalo as Cyrano (a splendid balance of bluster and tenderness) and KL Dizon as Roxane.

But it’s also hard not to wish “Mula sa Buwan,” though cogently directed by Valera, had found a better venue.

At Ateneo’s Henry Lee Irwin Theater, you are always aware of the excess, unused space in the stage’s periphery. The lighting and sound designs both need retooling, and the set design should have committed to either a true bare-bones approach or full-scale grandiosity, and not the middle ground that makes the show look like a high school production.

At over two-and-a-half hours, this production could definitely use some trimming.

Still, “Mula sa Buwan” beats with a heart that’s truly its own, and one it never hesitates to bare in full to the audience. It’s a little show that has so much to give, one that does not shy away from vulnerability. So, before you know it, you’re already in love with it.

The irony here is that this story should be a guaranteed click with Filipino audiences: It’s Princess Sarah, for goodness’ sake! At the very least, one should be familiar with either the 1995 film “Sarah… Ang Munting Prinsesa” (starring pre-teen Camille Prats and Angelica Panganiban) or the 2007 ABS-CBN TV series.

This version, with book and lyrics by Brian Crawley and music by Andrew Lippa, changes Sarah’s background from the English Raj to an African childhood, but that’s about the only notable revision.

This African bit takes center stage as director-choreographer Dexter Santos brings his signature emphasis on movement from the Dulaang Unibersidad ng Pilipinas stage to Rep, in the process whipping up a storm of tribal masks and thrashing bodies reminiscent of “The Lion King” on an acid trip (most of the dancing occur as imagined sequences, after all).

That’s as authentic as things get.

The problem, it seems, is that this production has a dismaying lack of emotional depth, rendering the overall proceedings inauthentic. You simply don’t feel for any of the actors, no matter how well they sing, never mind the inconsistent British accents.

Worse, as you watch this headstrong girl struggle against her vile, iron-fisted orphanage matron, not for a second do you root for her, her friends, or her story.

As a play aimed for children, this “Little Princess” is dispossessed of the ingenious, entertaining qualities that can sustain a kid’s attention. Adult audiences, on the other hand, may see this show as a squandered opportunity for emotional resonance (which need not even be something heavy and heart-stabbing).

All technique and no heart, this production sadly leaves you cold and yearning for a return to Rep’s better years—“Little Women,” “Jekyll and Hyde,” “The Producers,” etc. Maybe next year? —CONTRIBUTED