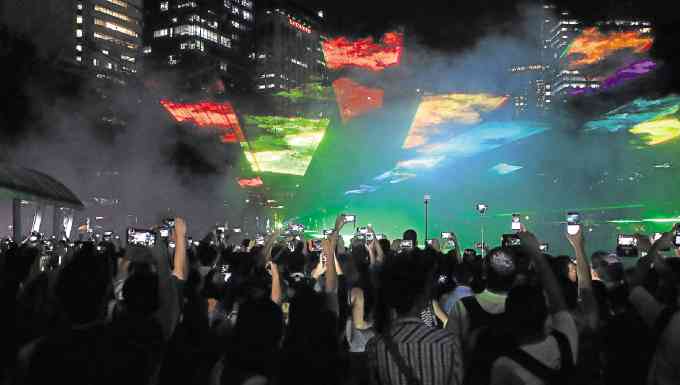 Look up and around at Ayala Triangle Gardens’ Festival of Lights 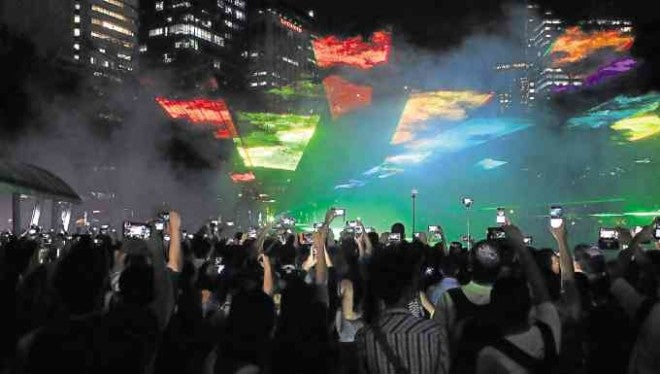 The annual lights-and-sounds show at Ayala Triangle Gardens has beguiled Filipinos since it started six years ago. Families and friends make it a point to head to Makati during the holiday season to take in the wondrous Christmas light displays.

This year, the Festival of Lights has three themes: Christmas Fiesta; Classic and Epic Christmas; and Sweet and Magical Christmas by award-winning directors Voltaire de Jesus and Luther Gumia, with musical score by Jazz Nicolas of Itchyworms and Mikey Amistoso of Watusi Manila.

As darkness falls, blazing lights transform the Ayala Triangle Gardens into a magical paradise as more than a million lights draped on trees and throughout the grounds blink on and off in time with the music. For several minutes, these lights will flash and change colors to the beat of the medleys, bringing the unmistakable Christmas spirit alive.

The music for Christmas Fiesta encapsulates the Filipino tradition with fun, bright and rapid movements inspired by Rio de Janeiro.

The second medley takes the audience to a whole new world with scores inspired by magical, heroic and period films. Viewers are treated to a vast array of sparkling colors depicting the traditional Christmas spirit.

Capping the show is the Disney-inspired Sweet and Magical Christmas. The 20,000-square meter garden will be filled with color as the lights keep time to the music, transforming the landscape into a wonderful Christmas dream.

“This year, we’ve prepared another magnificent show that will definitely spark everyone’s merry hearts, bringing families, friends and the whole community together and remind them of the joys of Christmas,” said Shiella Aguilar, project development manager for Makati.

The Festival of Lights has served as the centerpiece of Ayala Land’s Christmas spectacle for the past six years. It is the only one of its kind in the Philippines.

This year, the Festival of Lights has made it once again on Conde Nast Traveller’s annual list, “Where to See the World’s Best Christmas Lights.” It is in distinguished company such as the Tivoli Gardens in Copenhagen, Denmark; the holiday lights display at the legendary Champs-Elysées in Paris; and Japan’s Kobe Luminarie.

Across the metropolis, concrete islands have been transformed into Christmas landmarks featuring holiday themes closest to people’s hearts: the Holy Family, the Three Kings, angels, Christmas parol and gifts.

This year, these bright lights and sounds can also be enjoyed beyond Makati, as Ayala Land brings its much-awaited lights-and-sounds show to Nuvali, Bonifacio Global City, Centrio and Ayala Center Cebu.

Makati has also lined up exciting events to delight Filipinos this holiday season. Circuit Makati has put up its interactive outdoor Christmas tree installation, measuring an impressive 56 feet, which will be on display until Jan. 8.

To give meaning to the season, daily Thanksgiving Masses will be held nightly at 6 p.m.,  from Dec. 15-23 at the fountain area of the Ayala Triangle Gardens.

Christmas never fails to delight even the busiest of people, especially when they have Makati’s yearly holiday tradition to look forward to. Once again, Makati promises memorable and delightful holiday festivities for families, colleagues and friends.

The Festival of Lights 2016 is copresented by HSBC. This spectacular production is also made possible by MasterCard, Coca-Cola, Sun Life and Oishi.