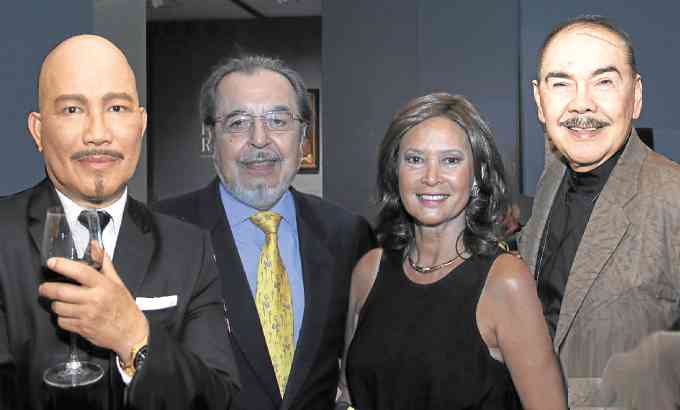 Your mantra for the week: “The I AM within me is creating miracles in my life here and now.”

The most urgent problem in Metro Manila especially during this holiday season is the traffic. And I have the spiritual solution to it.

Imagine the number of hours you could be speaking and conversing with that God-within, all throughout the hours you spend moving slowly, or not at all, in traffic.

This chat should be likened to a no-holds-barred conversation with your best friend or your confidant. You may ask any questions, make remarks no matter how irreverent, but always keeping Divine Respect in mind and heart.

An Iamist may find it easy to do this because we believe that God is within each human being through the I AM within each man. Note that in Exodus 3:14, the name of God is “I AM THAT I AM.”

Or you can get yourself mantra beads, which I often talk about, and “mantra” all your desires. You would be very surprised how that God-within-you answers when you become aware of the events, people and circumstances that follow—this is how God speaks in tongues.

If only you can stop complaining—in your mind, in your heart and, most especially, through your mouth—you would find the traffic improving.

Last week, chef-musician Carlos Lopez called to say I had invitations to a show dubbed “Your Evening with Pilita and Eric” at the Theatre at Solaire.

Among the guests were multi-awarded balladeer Basil Valdez; singer-stand-up comedian Dyords Javier, and The CompanY led by Moy Ortiz.

Rony Rogoff, Diana Jeanne Lopez and I arrived on time for cocktails. We had a tête-à-tête with former Batangas governor Dodong Mandanas and his lovely wife Gina Reyes; GMA 7 chair Henry Gozon and his charming spouse Tess. “You know that Pilita has always been one of my favorite singers,” said Henry, who celebrated his birthday recently.

The cocktail buffet table was constantly being refilled because of the queue that was getting longer by the minute. Which surprised us, but became self-explanatory when we entered the theater and realized that it could sit a thousand and eight hundred people.

When the curtain rose, we were astonished to see the AMP Big Band conducted by Mel Villena with Asia’s Queen of Song Pilita Corrales in a stunning orange satin gown singing “Kapantay ay Langit.”

The audience was visibly delighted as Pilita confidently stepped down the stage in high heels and long train, and said, “Kulang ang palakpakan please.”

She was not only the star of the night but also played co-emcee as she introduced the producer and her co-performer Eric Cruz, whom she described as “a music lover who takes voice lessons on a regular basis and owns a recording studio.”

It was our first time to see and hear Eric, who went onstage in an electric wheelchair.

The show had it all—an extravaganza of songs, dances, comedy sketches which went on for more than two hours.

Pilita showed off various gowns like she used to in her legendary show “Your Evening with Pilita.” She was in top form, hinting that she had recovered well under the supervision of her doctors who were in the audience. DJ Lopez remarked, “I didn’t know that she could be so funny.”

Pilita’s brother Rafael Corrales and I used to manage her career under our company called “Pilgeora.” We always knew that she was a natural comedienne.

Eric may not sound like a professional singer, but the show was truly inspiring because he found a medium of expression for himself, instead of sulking about his being a polio victim. He even kidded that, “My wife Shirley recently ended up on a wheelchair herself, but mine is electrical and hers is purely mechanical.”

Eric’s closing spiel was dedicated to his father and mother which was most touching. It was only at that point that we realized that he’s the son of F.F. and Angelita Cruz—and a sibling of the successful businessman Philip Cruz and the world-renowned fashion designer Josie Natori—aside from being married to Shirley Halili, who was recently awarded the Aliw Lifetime Achievement Award for her Halili Cruz School of Ballet. The school has consistently produced first-prize winners in international dance competitions.

Eric and Shirley are truly an admirable couple. Their wealth is well spent in promoting Philippine arts and culture. Eric is most praiseworthy for showing that handicaps can be overcome through living a creative and constructive life.

It was, indeed, a night of friendship—cherishing old relationships and making new ones. Kudos to Leo Rialp for a job well done.

I first met Glenda Barretto in my post-graduate years while I was an instructor at Far Eastern University and working in an advertising agency. Most of my friends lived in Quezon City and we used to visit the then famous D&E where they served the most fantastic bibingka ever. After a gap of a decade or so, martial law was declared.

A few years after my release from detention, Via Mare was born. And that was the beginning of my close relationship with a top creative Filipino culinary chef. Via Mare opened in 1975 with Glenda and husband Pancho Barretto as two of the 11 stockholders. Its 40-year history is nothing short of legendary.

From its first outlet in Greenbelt 1 where we spent many evenings on special and nonspecial occasions dining, wining and listening to a vocalist accompanied by a guitarist, both architectural students. But today, the vocalist is none other than the international celebrity Leo Valdez.

Elvira Manahan, Briccio Santos, Trining Morelos, Mario Katigbak and Rafael Panganiban would dine with Glenda often and would be treated to food tasting for new recipes that she was coming up with.

The adventures in gourmet land never ended. Via Mare catered for the Marcoses in Malacañang and reached its peak in its catering prowess when it prepared meals for 10,000 people in Batac, Ilocos Norte, when you-know-who celebrated a birthday.

Only a Glenda can pull off such a staggering feat. She has also prepared dinners in honor of US President Gerald Ford, King Juan Carlos and Queen Sophia of Spain, St. John Paul II, Prince Faisal Bin Abdullah, President Jose Maria Aznar of Spain, Pope Francis, and the latest was the Apec meeting with 21 heads of state in attendance.

The National Artist awards board does not have a category for the culinary arts. However, I am now suggesting strongly that one be added and the first recipient should be Glenda Rosales Barretto for her life achievement in the culinary arts where she has excelled, both as a chef and as an entrepreneur and is constantly raising the bar in gourmet dining.

Through her work, she has brought honor to the country, has inspired artisans and practitioners in the industry and has given Philippine cuisine recognition in the world market.

To top it all, Glenda has authored and published six books, the latest of which is “Via Mare: 40 Years of Iconic Events through Menus, Recipes and Memories,” which was launched recently at the Ayala Museum with more than a hundred guests in attendance.