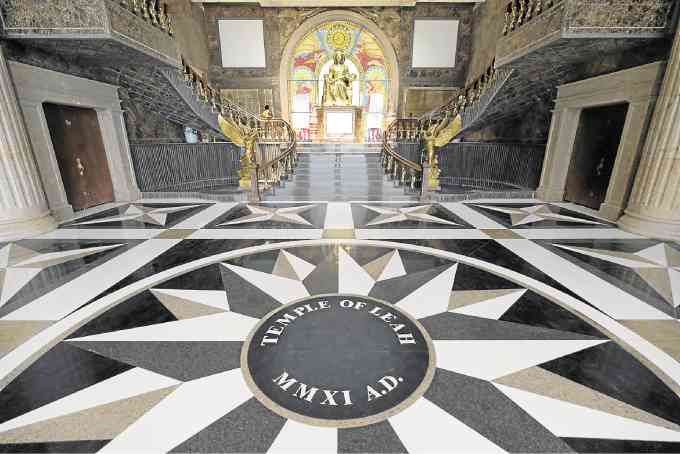 Sun pattern on the flooring and shrine leads to the formal staircase.

Call it the “Taj Mahal of Cebu.” The grandiose Temple of Leah was built by a man as a testament to his love for his late wife. Perched on the hilltop of Busay, the structure awes visitors with its resplendent sculptures and its imposing breadth. Like classical temples, the design is meant to be admired only from the outside.

The architecture makes references to Roman temples—the rectangular design, the raised podium for the shrine, a triangular pediment above the portico of Doric columns, and an altar of the cult goddess under the skylight. While classical temples built storage rooms behind the altar, the rooms for Leah’s collections were built on opposite wings.

But while classic architecture made use of clay, sand and plaster, this structure was constructed with modern materials of concrete and wood, reinforced with steel frames.

Entrepreneur Teodorico Adarna dedicated the temple to his wife of 54 years. Leah died of lung cancer in 2012 at 69. The edifice is meant to be a repository of her items gathered from her travels. 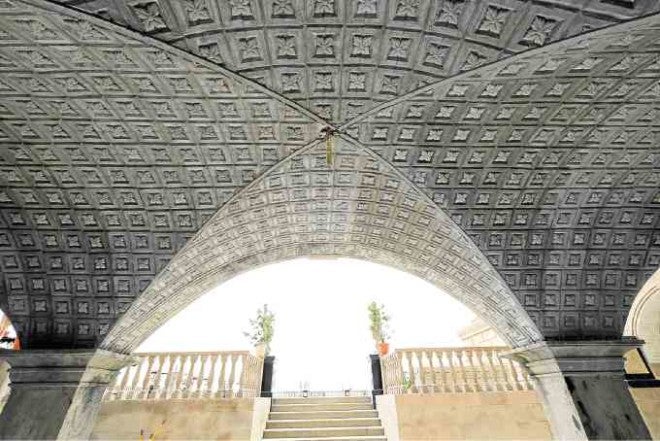 “My mother was a collector, a hoarder. She also had seven houses where she could put those objects. Before she died, she wondered where to put her collection. My father built the temple to store all her things. That was his promise before she died,” says Arlene Adarna-Mangubat.

Leah was 16 and Teodorico was 19 when they married. They had four children—Allan, 56, Arlene, 54 Arthur (deceased) and Alex, 39—plus 16 grandchildren, including actress Ellen Adarna.

An engineer by training, Teodorico worked in several companies. As a resourceful wife, Leah tried to help make ends meet by selling pigs, for instance, to pay for their children’s tuition. There were tough times, such as when the electricity was cut off because the family couldn’t pay the bills.

Teodorico finally made money through the motel chain, Queensland. Meanwhile, Leah invested in many properties, including the present lot in Busay where the temple stands. Upon her death, Arlene had to secure over a hundred land titles, the sizes of the lots ranging from 5,000 square meters to 30 hectares.

Arlene remembers her father as a workaholic. Aside from the motels, he was also involved in the construction business. As a young mother, Leah became more like an older sister to her children. It was their grandmother who became the authority figure to the Adarna siblings.

Having become successful entrepreneurs, Teodorico and Leah inspired their children to be independent and to put up their own businesses. The couple also traveled extensively; when they came home, Leah would bring home 20 boxes at a time, or buy 20 rolls of Persian carpets.

When the Adarnas built a 2,500-sq m, eight-bedroom house in the posh Ma. Luisa subdivision, they hired architect William Coscolluela and the pioneer interior design firm of Cancio Calma. However, Leah was overcome with horror vacui, or the fear of empty space. She bought a profusion of neoclassic cabinets, sculpture and pottery, such that their residence began to look like a warehouse. One of her conversation pieces was a fancy 16-seater dining table.

Today, that house serves as the ancestral home of the Adarnas.  Teodorico has since remarried and lives in Davao. Leah’s possessions are stored in chambers in the temple.

“I’m the opposite of my mother. You won’t find lots of jars in my house. There are a few picture frames and vases to hold flowers. I don’t like clutter,” says Arlene.

“Still, I learned the value of money from my mother. She knew how to save and invest. But along the way, she bought so many things. You can’t take them with you to your grave. You’ve only got memories to live with,” says Arlene. —CONTRIBUTED