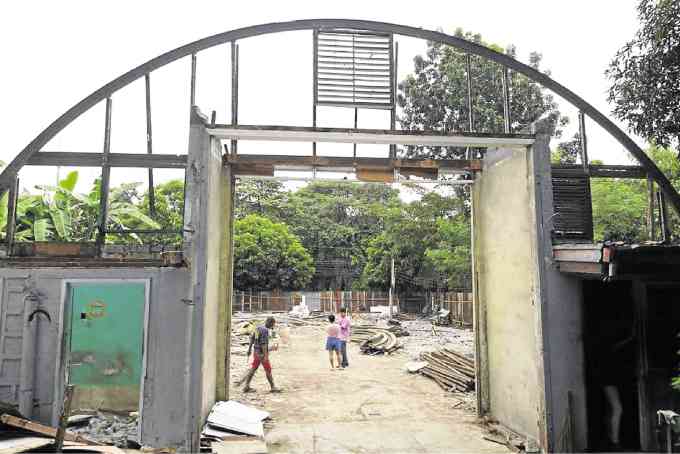 Present photo of the structure

The only remaining wartime military housing structure on the University of the Philippines Diliman (UPD) campus has been demolished to give way to a theater.

Called a quonset hut, this prefabricated steel semicircular building was invented in 1941 in Quonset Point, Rhode Island, to provide durable and easy-to-assemble structure for the use of soldiers and their equipment.

In UPD, a number of these housing facilities were left after the war. They were reused as offices and classrooms.

This particular structure, located at the corner of Magsaysay Avenue and Roces Street, became the university’s procurement office.

Gerard Lico, the university architect from 2008 to 2014, said the structure was significant since it was a remnant of the military past of UP, which was an American garrison in the 1940s.

Lico told the Inquirer the hut was demolished without anyone asking permission from the National Commission for Culture and the Arts (NCCA).

NCCA had reminded the university in a letter in February 2015 to protect the Presumed Important Cultural Properties (PICP).

In the letter to UP vice president for development Elvira Zamora, a copy of which was obtained by the Inquirer, the NCCA identified the marked structures inside the university and pointed out PICP structures that included those that were at least 50 years old.

“We would like to request your good office to cause the dissemination to UP System decision-makers and stakeholders to safeguard your declared and marked cultural properties and deemed/presumed ICPs against modification or demolition,” part of the letter read.

Lico, who suggested for the structure’s conversion into a black box theater during his term as university architect, expressed dismay over the demolition since it was the only remaining example of a quonset hut from the 1940s.

He also explained that university historians were not consulted before the structure was torn down.

“The important thing here is that [UP] did not make an effort to conserve the structure in situ,” said Lico. “It is a testimony to the site’s past as a military garrison before it became a campus.”

In an e-mail response to the Inquirer, UP System president Alfredo Pascual relayed UP Diliman chancellor Michael Tan’s statement on the matter.

In his statement, Tan said the university was aware of its historical significance and that the structure was not demolished but “dismantled” and would be relocated to the arboretum area.

The e-mail added that the quonset hut had been carefully documented before it was dismantled and the late architect Jojo Mata had been consulted about the relocation.

Mata “had neither objections to the relocation nor advice on NCCA permits,” said UP’s e-mail.

“The quonset was intended to be a temporary structure for wartime use, easy to build, dismantle and transfer depending on the military’s changing needs,” university architect Eric Tabafunda was quoted on the e-mail.

“Ours was heavily retrofitted by DBM in the ’70s with only the steel framing as the original structure.”

Lico refuted this claim and said the galvanized iron sheeting of the structure was replaceable. He added the “dismantling” was not documented.

What the university did “was to tag everything so that each structural member can go together for ease of reconstruction,” he explained.

He added UPD did not obtain a demolition permit from Quezon City Hall. —CONTRIBUTED