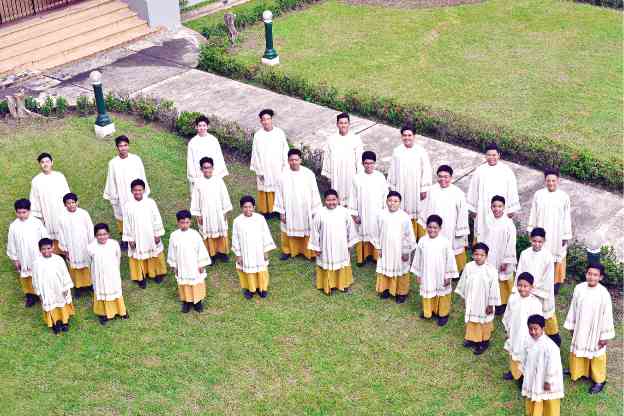 The angelic voices of the Tiples de Santo Domingo will usher in the holiday season when “Benedicere… A Christmas Jubilee Concert” is mounted at the Cultural Center of the Philippines on Dec. 13, 8 p.m.

Performing with the renowned and the oldest existing boys’ choir in the Philippines are the Dominican Student-Brothers and the Santo Domingo Male Chorale.

Fr. Roland Mactal, OP, prior of the Santo Domingo Convent, says that “Benedicere” is being staged in celebration of the Jubilee of the foundation of the Order of Preachers (OP). More popularly known as the Dominicans, the order is commemorating 800 years as one of the Catholic church’s most widespread, influential, leading orders.

“Benedicere” means “to bless” and is part of the Dominican three-fold motto of “Laudare (to praise), benedicere, praedicare (to preach).”

“Through the concert,” Fr. Mactal explains, “we hope to raise funds for members of Tiples who are in need of financial assistance and to support their holistic education. This is because we are also concerned with all aspects of the Tiples’ growth as the members are trained to become well-rounded individuals.”

According to a 16th-century reglamento or rules, which were issued by the Santo Domingo chapter, the Tiples is the oldest existing boys’ choir in the country.

Records show that when Fr. Pedro Bolaños came to the Philippines in 1587, he immediately went to Cagayan province to start his mission of propagating the Catholic faith. Upon reaching one town, he saw youngsters wandering aimlessly around while their parents worked in the rice fields. He gathered the young boys and, as was customary at that time, taught them how to sing. That, most likely, spawned the first “schola cantorum” (music school) in the country and its boys’ choir became the forerunner of the Tiples de Sto. Domingo.

Initially, the boys were trained to assist in the liturgy. They were eventually trained to sing in the celebration of the Mass and the festivities of Our Lady of the Rosary La Naval de Manila in an environment much like today’s daycare centers. Today, the Tiples de Sto. Domingo is considered one of the country’s best boys’ choirs—mesmerizing audiences with the harmonious blending of crystal-clear voices.

But how does a young boy become a member of the famed group?

Eugene de los Santos, faculty member of the University of Santo Tomas (UST) Conservatory of Music and the Tiples’ choir director, explains that announcements for auditions are periodically made. “During auditions, we look for boys who have an ear for music and, of course, a good singing voice. Then, we take them in for training.”

After a year-long coaching in the rudiments of singing, applicants who qualify for membership are then allowed to secure a scholarship.

“Anybody can apply, even a street child,” says Fr. Mactal. “We offer scholarships at Angelicum College from elementary to high school. However, they have to maintain good grades and follow the school’s standards in studies. They have to observe exemplary Christian behavior. In a way, these boys are an extension and reflection of the Dominican spirituality or charism.”

In exchange, the boys become permanent attractions during the pomp and pageantry of celebrations in connection with La Naval’s feast days.

Says Fr. Mactal, “In Santo Domingo Church, the Tiples is the official boys’ choir of Our Lady of La Naval. They sing the much-anticipated ‘Despedida ala Virgen’ during the festivities every October.”

Himself a member of the boys’ choir from 1975 to 1981, Father Mactal sees his stint with the Tiples as a valuable learning experience.

“In those days we lived here in Santo Domingo. Dinadalaw lang kami ng parents namin every Sunday. Once a month we were allowed to go home. Here, we were given particular chores to do.

Because I was away from my family, I learned discipline early in life,” he says.

Lovers of good music will certainly enjoy the repertoire of songs in “Benedicere.” The list includes “The Ceremony of Carols” by English composer Benjamin Britten.

Because it’s Christmas, De los Santos personally picked the set of songs. ” ‘The Ceremony of Carols’ is a contemporary English repertory for a boy’s choir,” he explains. “For this, the Tiples will be accompanied by a harp to be played by Lourdes Gregorio of the UST Conservatory of Music and UST Symphony Orchestra.”

Multiawarded pianist Raul Sunico will be playing a medley of Christmas music, followed by soprano Thea Perez with former Tiples members and tenor Ronan Ferrer, and then the current Tiples members will perform with the UST Symphony Orchestra.

What promises to be a stunning number is a Tiples soprano with both the present and past choir members. For the finale, the Dominican Student-Brothers will serenade the audience with traditional and well-loved Christmas carols.