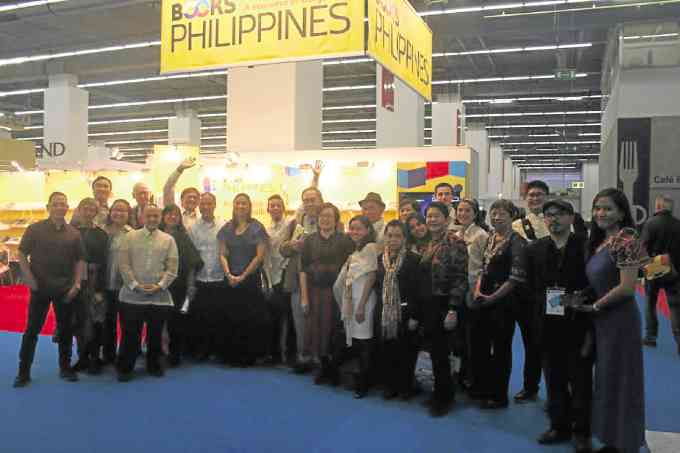 FRANKFURT—It is really easy to feel microscopic at the Frankfurt Book Fair (FBF), also known as the Frankfurter Buchmesse. This yearly gathering, held over five days in October, is the world’s most important bookfair, with publishers from all over the world converging on the ever-busy Frankfurt Trade Grounds in Frankfurt am Main to talk, do and dream up business. Between 250,000 and 300,000 visitors walked through the doors this year, and more will arrive in 2017.

In this country of beer and bread, Frankfurt turns into the city of books once a year, an affirmation of how the city has been trading in books for centuries. Now the entire world does so within its borders.

It is virtually impossible to find a particular booth on your own; there are maps and staff everywhere to make sure you get to where you’re going.

But wait a second. In Hall 4.0, at the very end of aisle C, there is a sudden burst of color. The Philippine booth stands near the exit, the bright yellow design catching the passersby’s eyes.

Designed by Studio Dialogo’s Liza Flores and Abi Goy, the booth seemed to just jump out at you. Visitors inevitably stopped dead in their tracks to look and take photos.

“What a beautiful booth,” one visitor said while taking a selfie. The booth bore the slogan “Books Philippines: A New Wave of Storytelling,” (crafted by BBDO Guerrero’s David Guerrero) while rivulets of other colors ran throughout the walls.

Front and center were the books, of course, all kinds of Philippine books: children’s books, academic treatises, coffee-table tomes, poetry collections, novels, Rizalania and so much more—a selection that paralleled the diversity found in the country’s 7,107 islands.

This booth is symbolic of the efforts and the dreams of the Philippine publishing industry. On the first official day of FBF, the Philippines held an exuberant reception at the booth, the crowd’s energy sapping the chill from the cold air. Philippine Ambassador to Germany Melita Sta. Maria Thomeczek and First Secretary Catherine Torres graced the opening reception, with Thomeczek giving some opening remarks.

National Book Development Board (NBDB) chair Neni Sta. Romana-Cruz then recalled: “As we gather here in this venue today, I think of last year’s courageous attempt to mount a booth with very limited resources. From what was a ragtag band of a dozen or so in the delegation, there are now 38 of us in Frankfurt and the books on exhibit are testimony to more publisher participation.”

A wonderful presence at the booth this year was National Artist for Literature and Komisyon ng Wikang Filipino chair Virgilio S. Almario, who launched his new book at the FBF, “On Sundays” from Adarna House.

Also launching a book at the FBF was Sir Anril Pineda Tiatco, who launched “Performing Catholicism: Faith and Theatre in a Philippine Province,” from the University of the Philippines Press.

Cruz noted the welcome presence of writer Dr. Jose Y. Dalisay Jr. and comic creator Manix Abrera who were sponsored by the National Commission for Culture and the Arts.

The largest ever Philippine delegation wads aided by funds allocated by Sen. Loren Legarda, who unfortunately could not join the delegation but sent a message read by Cruz: “Despite this, our book industry’s importation still exceeds over exportation. In fact, Philippines ranks at the bottom among countries in Asia-Pacific region in terms of book production. This only means that there is much opportunity for us in the international community only if we make ourselves visible to them; that is, if we have various means to make our written works more available and made known to a wider scope… (this participation) gives us a chance not only to stimulate the international community’s interest and attention in our domestic literature but also to generate international partners and investors for the good of our publishing industry and encourage a strengthened and inclusive participation of local publishers.”

Surely this effort would work toward that end. The prohibitive cost of the booth’s construction and rental were covered by the government subsidy as carried out by NBDB. Thus Philippine publishers were able to send representatives only having to provide for airfare and accommodations. The Philippine Daily Inquirer was one of the 18 co-exhibitors at the Books Philippines booth.

For five days, reps from the Philippines bought and sold rights to publishers and retailers in a seemingly endless series of meetings at the booth. Things had been busy even before the FBF proper got going. At “The Markets: The Global Publishing Summit,” Ateneo de Manila University director Karina Bolasco talked about the history and identity of the book publishing industry. Adarna House’s Ani Almario—also president of the Book Development Association of the Philippines—and Alvin Juban of the Game Developers Association of the Philippines spoke about their respective areas of specialization in front of a lively international audience.

On the second day, three Asean neighbors (who also had neighboring booths in Hall 3.0) held the first ever Illustrators’ Improv, a.k.a. “Draw to the Death!” where comic artists from Malaysia, Indonesia and the Philippines tried to best each other in interpreting prompts from the audience. After a raucous three rounds, Abrera emerged victorious to the delight of the mostly Filipino audience.

The Philippine delegation exchanged war stories, jokes and more as members shuttled in and out of the booth. There were collegial dinners almost every night, something new for the Filipinos attending FBF. In those conversations as well as the shoptalk at the booth, disparate members of a publishing industry burnished ties amid hopeful talk for a 2017 return to the FBF. It truly recalls what Cruz said at the end of her remarks at the opening reception: “It truly takes a village, a barangay, to stage an initiative like this.”

At the end of the week, the hundreds of thousands of visitors left the Frankfurt Airport to return to their countries and territories with contracts and advance reading copies of unpublished books in their luggage. But in the back of their minds, many of them also carried with them the new wave of storytelling championed by Books Philippines, their dreams touched by a burst of brightest yellow, nothing small at all.