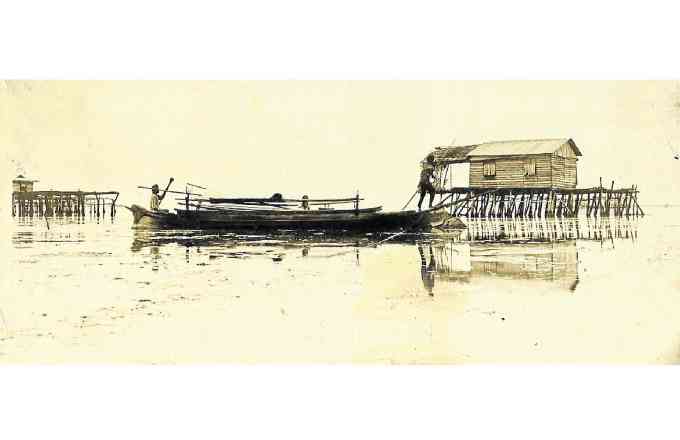 Panoramic photograph of a Badjao village taken by theNational Artist

Throughout his prodigious life, National Artist for Visual Arts Abdulmari Asia Imao (1936-2014) seemed to have had at his beck and call the sarimanok, avian harbinger of good fortune in Maranao lore.

That he is most known for renditions of the brightly hued mythical bird should underscore his mastery of Mindanao iconography. But unlike the mythical bird, his rise to artistic zenith was not without struggle.

Born on Jan. 14, 1936, Imao hailed from Tulay barrio in Jolo, Sulu. After the untimely deaths of two daughters, Jamasalli Allih and Asia Imao relinquished the care of the young Abdulmari to Capt. Abdurahim Imao, his mother’s brother. This made him an “anak kiyapangdihil,” practiced to counter bad luck such as deaths in the family.

In 1954, a floating art exposition docked in Sulu. Artist Tomas Bernardo noticed Abdulmari was keen on the exhibit. When Bernardo saw Imao’s works, he urged him to go to Manila.

With hardly any funds and just a few clothes, Abdul (he was also called “Mari” by friends) ventured to Manila and initially stayed in Balut, Tondo, with Bernardo.

His examination results fell one slot short of the scholarship openings at University of the Philippines (UP); he landed fifth when only the Top 4 were given scholarships.

Sheer gumption drove him to Malacañang to ask for President Ramon Magsaysay’s help. He walked daily to the palace to seek audience with Magsaysay because he did not have any transportation money.

Presidential appointments secretary Jose Maria Ansaldo was so moved that he gave Mari money for a meal and decided to help send him to UP.

Abdul was always strapped for cash but his physique that had been sculpted by hard labor helped him augment his measly funds; he became a model and posed in life drawing sessions in the Fine Arts school. He also joined the varsity swimming team.

Under the tutelage of Guillermo Tolentino, Anastacio Caedo and Napoleon Abueva, Imao chose sculpting. He began winning art competitions with works on Moro themes, such as “Muslim Prayer.”

Works he exhibited at the Contemporary Art Showroom after his studies and early in his career were touted as “startling creations in wood, adobe stone and plastilene” by a “gifted young sculptor.”

Next, he was a ceramics and photography scholar at the Rhode Island School of Design, He also won a film directing scholarship from the faculty of Columbia University.

At the director’s office at the Metropolitan Museum of Art in New York, his bas-relief piece “South Pacific” was on display for two years. It was the museum director who made it possible for Imao to receive a grant normally given only to American citizens—one that allowed him to travel to Europe where he gained exposure to art in Scandinavia, Belgium, England, France, Germany, Holland and Switzerland.

In an interview with Nick Joaquin in 1969, Imao said: “I think the woodcraft and smooth lines of Scandinavian design have influenced me greatly. They are among the best designers in ceramics.”

But he disclosed to Joaquin his chosen idiom: “I have been working on the sarimanok style. This is a design I am trying to improve, revitalize. That is why I have been doing research on this Muslim motif: to develop it into another design which will be distinctively Muslim. ”

Although a Tausug, Imao loved and adapted in his art the vividly colored motifs common among the Lumad of Mindanao.

He also became noted for his Islamic calligraphy; the sari-mosque or the gourd-like dome with crescent moon and cross that often appeared in his depictions of the sarimanok with the staple fish in its beak; the serpent or naga, and okir or ukkil, the undulating carvings that served as embellishments to the Mindanao architecture.

Imao was the quintessential scholar. He wrote a number of research monographs and briefs on Mindanao art and culture, such as “Documentary and Photographic Study of Sulu People” (1965, Ateneo de Manila’s Institute of Philippine Culture) and “The Study of Sulu Art.”

After studies abroad, Imao taught at University of the East (UE) and contributed to Chronicle Manila in which it was common to see his byline for both text and photos. For UE’s Research Center for Sciences, Humanities and Culture, he wrote “The Study of Sulu Tribes.”

Imao’s broad creative range may be seen all over the Philippines. Along the bay front on Roxas Boulevard is the monument of President Elpidio Quirino. In UP Diliman is his largest calligraphic sculpture that spells out “Allah.”

In the Visayas, inside Fort San Pedro, is the statue of Magellan’s chronicler, Antonio Pigafetta.

His artworks are naturally plentiful in his native Mindanao. In the Aga Khan Museum alone, there are over 300 of his 450 versions of Allah’s sacred name.

In Saudi Arabia are his three-dimensional pieces of Islamic calligraphy. He was also United Nation’s consultant for brass-casting in Sri-Lanka. In fact, he was the first Filipino metalcasting consultant for Sri-Lanka and Thailand.

“Art is a sense of order and harmony,” Imao declared, “and to be a good artist, one must have the right attitude toward his interests and associates. In his works his life is reflected, and it is necessary that an artist must be generally well-informed and be interested in other related artistic fields.”

The National Artist Award citation perfectly captures Imao’s many sided brilliance: “Abdulmari Asia Imao, sculptor, painter, photographer, ceramist, documentary filmmaker, cultural researcher, writer, and articulator of Philippine Muslim art and culture, is a versatile and prolific Muslim Filipino artist. His sculptures of diverse mediums and styles, as well as his refined and innovative rendering of indigenous art images and motifs, are testimonies of his highly developed aesthetic sensibility, ingenuity, and wide-ranging experience as an artist.”

To mark Imao’s second death anniversary on Dec. 16, the National Commission for Culture and the Arts has mounted a tribute exhibit.—CONTRIBUTED