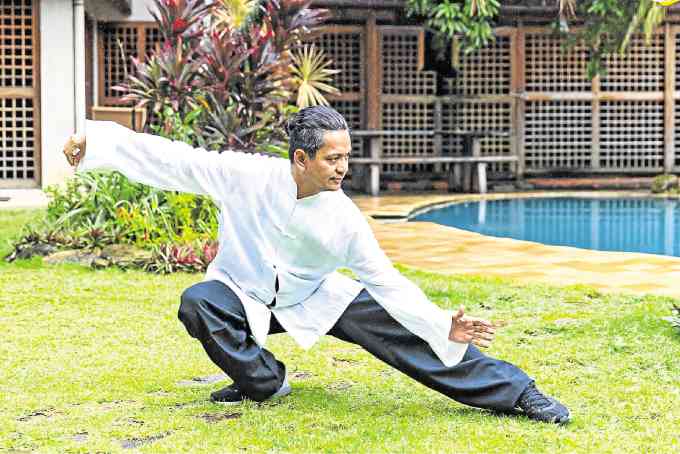 Cebuano designer Julius “Oj” Hofer found meaning in his work when he started to engage in calligraphy, tai chi, Ikebana and meditation. “My designs did away with the flourishes. They’re softer and more fluid. The sparklers are in my mind,” he says.

Hofer studied at the University of the Philippines College of Fine Arts, then went on to take up Clothing Technology. He rose to prominence when he became a finalist in a young designer’s competition in 1995.  He has been dressing up Cebu’s most glamorous women since. His style has evolved through the years, and now embraces a loose female silhouette, less traditional construction, minimal details and ethereal fabrics.

That fashion philosophy is reflected in his décor style. Hofer lives in a family compound where he is given a modest space for his creativity.  This is where the designer receives guests, paints landscapes and executes calligraphy. A converted Buddhist, Hofer creates a serene atmosphere that makes his bungalow a safe haven away from the madding Cebu traffic.

The place has an Asian-inspired look, characterized by beautiful, unfussy materials, simple but quality furnishing, elements of nature, creamy canvas drapes and most noticeably, the weathered patina of wood.

The visitor is welcomed by Buddha’s altar against a red wall with gold accents. “It invites good energy and neutralizes the negative ones,” he says. A tiny lotus pond is surrounded by rocks, while a bonsai and deities add to the quiet mood.

The flooring is lava stone, which is valued for its durability, healing effects and spiritual energy. A sliding wall mimicking the Japanese shoji screen divides Hofer’s creative space from the workshop. The rectilinear patterns of the sliding panels are repeated on the wooden ceiling treatment.

Big windows create airiness and bring in the natural light needed when he paints commissioned works. The intimacy of his space allows him to get lost in a meditative state while wielding his brush.

“When you are in the present moment, you become one with the ink or paint. It’s a contrast from making clothes, wherein you’re thinking of fitting and technique,” he says.

Unlike the typical spare and spartan Zen interiors, Hofer’s space is filled with interesting details that add personality.  He favors the strong furniture profiles of Cebuana manufacturer Luisa Robinson, particularly her chairs, vases and home scents. Natural objects, such as a petrified wooden table and stool, a snakeskin box, a homemade mini dress form made from santol wood, and a ceramic lotus on a rock bring a sense of calm. Stones on the backrest of a Dedon sofa offset its manmade weaving detail.

Yet, in keeping with the Zen look, a series of black-and-white photographs by Amanda Luym highlights the abstract details of his clothes. His décor tip? Maintain the essentials, but include whatever makes you happy. —CONTRIBUTED