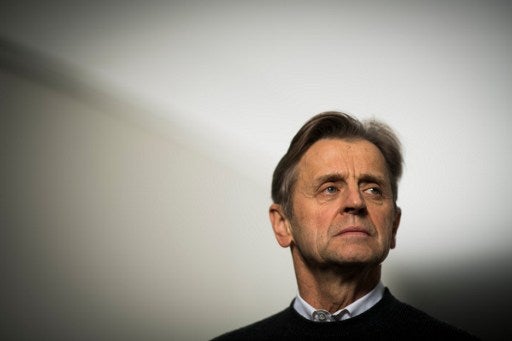 This file photo taken on December 8, 2016 shows Latvia-born, Russian and US dancer Mikhail Baryshnikov posing for portraits in Paris. Dream castings don't come much better than Mikhail Baryshnikov playing Vaslav Nijinsky -- one great ballet dancer playing another. Baryshnikov, now 68, is the star of "Letter to a Man", a one-person theatre show by the acclaimed American director Robert Wilson which follows Nijinsky's slide into insanity. AFP

Baryshnikov, now 68, is the star of “Letter to a Man”, a one-person theatre show by the acclaimed American director Robert Wilson which follows Nijinsky’s slide into insanity.

The Russian dance genius, who had revolutionized ballet with his choreography for Stravinsky’s “Rite of Spring” while he was still in his early twenties, went slowly mad after his former lover, the impresario Serge Diaghilev, cut him lose.

Diaghilev had bedded Nijinsky and made him the leading man of his legendary company the Ballets Russes after spotting the 19-year-old prodigy at the Mariinsky theatre in St Petersburg in 1908.

Now more than a century later, Wilson has dramatized Nijinsky’s searing and scandalous diaries, in which he excoriated Diaghilev.

It is, as Baryshnikov admits, a dance show in which he doesn’t actually dance.

“It’s more body language, it’s not really dance,” said the man once described by the New York Times critic Clive Barnes as “the most perfect dancer I have ever seen”.

His face whited up, and wearing top hat and tails on stage, Baryshnikov has lost none of his charisma.

The former star of Russia’s Kirov Ballet and later American Ballet Theatre, who still does his bar exercises every morning, said “Nijinsky was always important for me” — even though physically the two are very different.

Baryshnikov said Nijinsky was “a kind of universal actor. At that time, the level of male dance was not of the highest level, it was the ballerinas and divas” like Anna Pavlova that dominated.

“Then suddenly this very strange creature arrived, not very tall, not very beautiful in fact, with a kind of heavy musculature but of extraordinary strange proportions.”

Nijinsky did not have “a classical body. It was very developed and at the same time very soft, very ambivalent sexually, and he was mesmerizing to watch, every role was so different. He was a true cameleon.”

Baryshnikov, who has mostly lived in New York since defecting from the Soviet Union in 1974, said he had met Nijinsky’s wife Romola as well as his two daughters Kyra and Tamara.

“Tamara came to see this show in Los Angeles,” the dancer born in Latvia told AFP just before it opened Thursday in Paris and will run to January 21.

“She is now 96 years old, she lives in Arizona and she is remarkable — a 96-year-old young woman really.”

Diaghilev not to blame

While Baryshnikov says he was moved by playing such a great artist losing his mind, he does not blame Diaghilev for Nijinsky’s fate.

“I don’t know what would have happened if he had stayed with Diaghilev and the Ballets Russes. Probably it was genetic. His brother went to an asylum and his mother later on, and his daughter Kyra, who I knew at the end of her life,” also suffered from mental illness, he said.

But the fascination with the early 20th century’s greatest dancer who descended into madness at only 29 endures.

“He wrote the diary in six weeks, and then nothing. He retreated into darkness and silence into the end of his life,” Baryshnikov added. Nijinsky died aged 61 in London.

For his own part, Baryshnikov does not miss dancing with the world’s best ballet companies — “there’s life also beyond that” — and claims he wants “to retire one day”.

There is little sign of that yet, however. “Letter to a Man” is his second collaboration with Wilson after the acclaimed comedy “The Old Woman”, where his double act with Hollywood star Willem Dafoe was compared to such partnerships as Laurel and Hardy and Fred Astaire and Ginger Rogers.

He also runs the Baryshnikov Arts Center in New York and is performing in his one-man show “Brodsky/Baryshnikov” based on the poems of the Russian Nobel laureate Joseph Brodsky. TVJ