When farmers and chefs meet and eat together | Inquirer Lifestyle ❮ ❯ 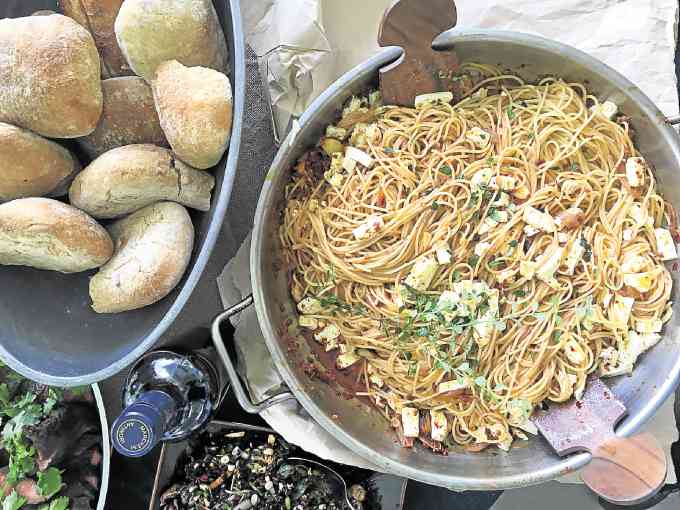 When farmers and chefs meet and eat together

The gap between farms and restaurants used to be far and wide. But when the farm-to-table social movement caught on, chefs became more conscious about getting fresh, varied food ingredients.

Recently, whatever wall dividing farms and restaurants was knocked down when 40 chefs and farmers got together to celebrate and engage in a healthy conversation.

The event was organized by chef/restaurateur Margarita Forés and Earthbeat Farm’s Enzo Pinga, who both invited colleagues to lunch at Comm’s Farm in Silang, Cavite.

At the gathering, Pinga said: “We have a lot of specialty produce we like to offer the market, and indigenous produce we like to preserve. Meeting the more innovative and progressive chefs in the industry was important, so we can show them our products and also work with them on how we can best utilize our indigenous varieties.”

JP Anglo (Sarsa) switched on the burner and rendered the oil from fatty strips of steak.

Holding a bowl, Queenie Villar (Hey Handsome) grabbed greens for a salad she collaborated in making with Nicco Santos (also of Hey Handsome), while Josh Boutwood (Bistro Group) brought out his cured lamb leg and carved thin slices for tasting.

It felt great to witness a spontaneous sense of camaraderie among chefs.

The lunch was both inspired and inspiring. But the conversation at the table was truly appetizing.
“When farmers see and taste what chefs do with our produce, it inspires us to grow more kinds,” said Gejo Jimenez of Malipayon Farm.

Huessaff added: “The best thing about it was seeing the farmers’ reaction to the chefs and cooks working on the produce, and asking them questions and seeing the potential of an ingredient… seeing the cooks curious about how the vegetables and herbs are grown, why the flavors differ, and what the farmers had in mind when they were planting them.”

More seeds of farmer-chef collaborations have been planted and everyone is earnestly waiting for even bigger, fruitful harvests. —CONTRIBUTED
The farm lunch and tour was sponsored by Casa Artusi Philippines, with support from Cibo di M Signature Caterer
and Malipayon Farm.