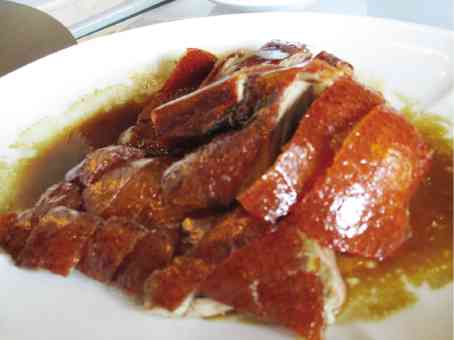 Early most mornings, chef Law Wui Wing can be found not in the kitchen, but in Chinatown. There he forages for ingredients he can use for Man Ho, Marriott Manila’s new Chinese restaurant.

Almonds for making almond cream dessert (he dislikes commercially made almond powder), exotic herbs and spices for enhancing the traditional Cantonese cuisine that Man Ho specializes in, as well as fresh vegetables, are just some of his picks.

What he doesn’t buy in Chinatown, Law imports from Hong Kong or China. The suckling pigs, for instance, come from Hunan province where pigs of good quality are raised. The pigeons, the goose, the Peking duck and the live abalone are likewise imported.

Some of the fish are sourced locally, such as the maayo fish from Palawan that was served at a recent media lunch. Since freshness is of primary importance, Law buys only live fish and keeps them in aerated tanks until they’re to be cooked.

“Only live fish can be steamed,” he points out. He also prefers to use wild fish rather than the cultivated ones which have a tougher flesh.

Despite such fastidiousness, the hotel has been very supportive. “They respect my wishes and grant my requests,” he says. Marriott general manager Bruce Winton jokes that Man Ho is now under the Law Dynasty.

Even the dim sum is prepared meticulously. The wrappers are hand-rolled and pleated by a team of experts headed by Du Wen Bo, a well-known dim sum chef in Beijing. They even use a marble tabletop for better hygiene. Whether it’s har gaw or siomai, the dim sum is cooked only upon order and brought to the table steaming hot.

Such attention to detail has netted Law his share of fame. In Shanghai, where he was executive Chinese chef at the JW Marriott Hotel, the Man Ho restaurant he was responsible for opening was named one of the top 10 Cantonese restaurants for three consecutive years by Shanghai Modern Weekly.

He also cooked for the Olympic athletes while he was with the Marriott Beijing in 2008, as well as for the American team during the 2010 Asian games in Guangzhou.

Once, in Hong Kong, Law was approached by a mysterious stranger with an unusual proposition: to cook for the then leader of North Korea, Kim Il Sung. Despite his hesitation, Law agreed.

Soon he was cooking in a large kitchen in a palace in Pyongyang, with all the ingredients needed to create a traditional Cantonese feast.

Since Law’s arrival in Manila two years ago, banquets of epic proportions have been a constant event at the Marriott. Sometimes Law and his staff would prepare lavish feasts for as many as 2,000 guests.

At P5,000 to P6,000 per person, the meal would include Alaskan king crabs that weigh five kilos each, king prawns, Peking duck with Mandarin pancakes, buchi stuffed with Ferrero Rocher chocolates and perhaps bird’s nest soup cooked in a gelatinous chicken broth that had been simmered with Chinese ham for five long hours. The soup is so flavorful you’ll want to sip every single spoonful.

Another Cantonese specialty is roast goose, which Law says requires a lengthy preparation. First, the goose is stuffed with Chinese herbs and chicken powder, and the skin basted with sugar water. It’s then air-dried for 10 hours in front of an electric fan.

“It’s very important for the skin to be dry for it to be crisp,” says Law. Only after the long wait is the goose oven-roasted.

The result is all worth such a laborious procedure. Underneath the crispy, mahogany-colored skin is a thin, barely perceptible layer of sensuous fat, attached to which is the tender, dark meat that yields gently to the bite. Served with a sweet plum sauce, it has an enigmatic Oriental flavor that satisfies all the senses of the palate.

With the recent opening of Man Ho, the roast goose—and other traditional Cantonese dishes—can now be ordered a la carte, says Law. But with several banquets already booked for the coming year, advanced table reservations are highly recommended, according to Brendan Mahoney, Marriott food and beverage director.

Despite the long hours, Law remains unfazed. He’s been primed for it. He started cooking in Hong Kong restaurants at age 15; being in the kitchen has become second nature to him. As is the satisfaction he derives from seeing his customers happy.

“If they’re happy, I’m happy,” he says. Even if that entails going on early morning trips to Chinatown in search of the best ingredients.