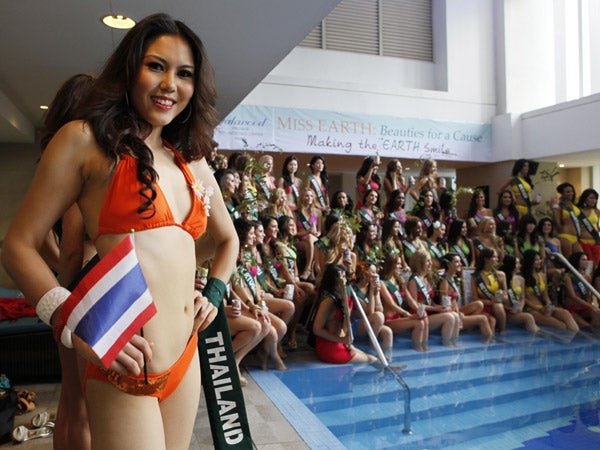 BATANGAS, Philippines—Miss Earth 2011 candidate Niratcha Tangtisanon of Thailand admitted that she felt sad when the organizers of the beauty pageant announced the decision to transfer the venue of this year’s contest to  Manila because of the flood situation in Bangkok.

But she later on realized that it was the best for everybody.

“I was really sad at first because Thailand has many things to offer and everybody was already very excited that the pageant will be held there. But then I realized later that it is the best for our country and for Miss Earth,” Tangtisanon told INQUIRER.net.

She said that even if she felt sad over the change of pageant venue, she is nonetheless having a great time in the Philippines.

“I love it [here]. People are very lovely, the place is simply beautiful, and the food is very delicious. I’m glad that I get to come here for the first time,” the Thailand hopeful said, adding that her favorite Filipino dish, so far, is adobo.

Although many say that the Philippines is very much similar with Thailand in a lot of things, Tangtisanon thinks otherwise.

All culture is unique from one another, said the Thai stunner, adding that she finds the differences interesting.

Before flying in to Manila

Before Tangtisanon flew in to Manila for the Miss Earth pageant activities, she visited some of the flooded areas in Thailand to give support to affected families.

She also helped in packing relief goods that were distributed in distressed communities.

Miss Earth 2011 was originally scheduled to be held in Bangkok, Thailand. However, Carousel Productions Inc. decided to move the pageant venue to Manila because of the flooding there which has claimed lives in recent months.

The grand coronation of Miss Earth 2011 is set for December 3 at the UP Theater in Quezon City.