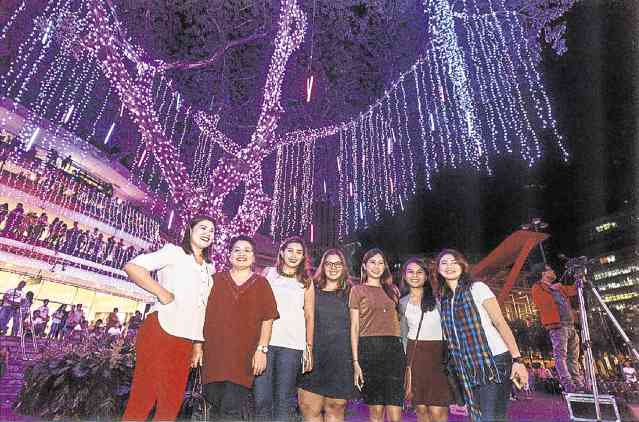 Set to rise is tallest building in Cebu Business Park

The event had the right formula for success. They called Teresin Mendezona who decreed that the round tables to fill the ballroom of the Marco Polo Plaza Hotel be all draped in black. The chairs, too.

For drama, centerpieces were of tall crystal tubes laden with long-stem pristine-white calla lilies. For contrast, an adjacent area was festive beyond words with a buffet spread that seemed to have everything, from herring to cheese imported from Davao (!).

And there were the premium wines from Bibendum, with Hans Eulenhoefer very much present. To take care of the PR, no less than Kaye Luym Sala and Cybill Gayatin Guynn of A-List. They were very much around as well.

The occasion was the sneak peek—or call it formal launch—of what the Latitude Corporate Center is going to be like when it rises on a prime tract of real estate at Ayala Land’s Cebu Business Park.

This is a joint venture of two formidable entities who combined two large properties. On one hand is Cebu Landmasters, and on the other the Borromeo Brothers Estate.

Latitude Corporate Center will be 24 stories high and when completed—one can hardly wait—will be the tallest, most masterfully crafted office building in the Cebu Business Park.

Up there on stage, with champagne flutes on their hands for the toast were Cebu Landmasters chief operations officer Franco Soberano, his father CEO Jose Soberano III, his mother VP Marose Borromeo Soberano, and his sister, marketing director Joie Soberano.

With them were Borromeo Brothers Estate president Bernadette Borromeo Gallego, managing director Jonel Borromeo and architect Jojo Tolentino, CEO of Aidea Philippines which will put up the monumental building.

Among those present were architect Ed Gallego with his pretty daughter Mirella who is also an architect, Gianlucca Guidicelli who is still collecting praise for his son Matteo’s recent Cebu concert, Hector and Angela (nee Borromeo) Almario, Pilar Borromeo Martinez-Miranda, Rosebud Sala, Elvira Luym and many more.

The building is registered with Berde—Building for Ecologically Responsive Design Excellence, the green building rating system. Its location is ideal, across the Ayala Center Cebu, beside the Pag-ibig building.

Speaking of Ayala Center Cebu, it had a tree-lighting ceremony at The Terraces in an event called Symphony of Lights. It gets bigger and bigger every year.

There must have been more than a million fairy pin lights in all colors wrapped around that century-old acacia tree, and dripping from its extensive branches.

“We will add some more,” said Celeste “Bong” Dy, Ayala Center Cebu general manager, who gave the joyful welcome remarks. She added that the symphony of lights will stay for a whole month.

Best of all, there was a concert of Christmas songs and other ditties superbly performed by Bohol’s Loboc Children’s Choir, which has won numerous awards locally and from international competitions.

In the audience were the nearby Cebu City Marriott Hotel’s communications director Frances Alfafara and PR officer Nico Velasquez.

They remind the music-loving public about “A Classic Gift,” the Christmas concert by the Classical Youth Orchestra of Cebu scheduled 8 p.m. today at Cebu Marriott’s Sampaguita ballroom.

“Admission is free,” they say, “and seating is first come, first served.” Highlight is the CYO performing Mendelssohn’s Concerto for Piano No. 1 with Ingrid Sala Santamaria as soloist.

The 40-member-strong orchestra will also perform the “allegro con brio” movement from Beethoven’s Symphony No. 5, the theme from the movie “The Mission” by Ennio Morricone, Bach’s Concerto for Two Violins, Massenet’s “Meditation” from Thais, and Christmas songs arranged by Leroy Anderson.

The concert finale will be “Kasadya” and other Cebuano carols. As an added fillip the Junior Ensemble of the CYO will feature in the intermission the two movements from Bach’s Brandenburg Concerto No. 3.